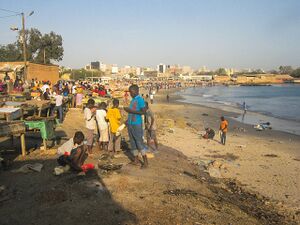 Senegal, officially the Republic of Senegal, is a country in West Africa. Senegal is bordered by Mauritania in the north, Mali to the east, Guinea to the southeast, and Guinea-Bissau to the southwest. Senegal nearly surrounds the Gambia, a country occupying a narrow sliver of land along the banks of the Gambia River, which separates Senegal's southern region of Casamance from the rest of the country. Senegal also shares a maritime border with Cape Verde. The climate is typically Sahelian, though there is a rainy season. Senegal's economic and political capital is Dakar.

It is a unitary presidential republic and is the westernmost country in the mainland of the Old World, or Afro-Eurasia. It owes its name to the Senegal River, which borders it to the east and north. Senegal covers a land area of almost 197,000 square kilometres (76,000 sq mi) and has a population of around 17 million.

The state was formed as part of the independence of French West Africa from French colonial rule. Because of this history, French is the official language, but it is understood only by about 15–20% of males and 1–2% of women. Like other post-colonial African states, the country includes a wide mix of ethnic and linguistic communities, with the largest being the Wolof, Fula, and Serer people, with the Wolof and French languages acting as lingua francas. Wolof is the most widely spoken language in Senegal, being spoken as a first or second language by 80% of the population.

Climate change in Senegal will have wide reaching impacts on many aspects of life in Senegal. Climate change will cause an increase in average temperatures over west Africa by between 1.5 and 4 °C (3 °F and 7 °F) by mid-century, relative to 1986–2005. Projections of rainfall indicate an overall decrease in rainfall and an increase in intense mega-storm events over the Sahel. The sea level is expected to rise faster in West Africa than the global average. Although Senegal is currently not a major contributor to global greenhouse gas emissions, it is one of the most vulnerable countries to climate change.

Extreme drought is impacting agriculture, and causing food and job insecurity. More than 70% of the population is employed in the agricultural sector. Sea level rise and resulting coastal erosion is expected to cause damage to coastal infrastructure and displace a large percentage of the population living in coastal areas. Climate change also has the potential to increase land degradation that will likely increase desertification in eastern Senegal, leading to an expansion of the Sahara. W

Senegal contributes almost nothing to global greenhouse gas emissions: the country emitted six-tenths of one metric ton of carbon dioxide per capita in 2014, placing 150th out of 195 countries in terms of emissions. W

From Erosion and Land restoration, Senegal.[edit]

ADERE is a program conducted by the Senegalese organization ASAFODEB based in Thies, Senegal. ADERE is a program in rural development with an overall mission focused on food security and reduction of poverty. There are 4 main axes:

ADERE hosts projects in 21 villages in the region, with activities and formation in each axe. For efficient implementation and dissemination, a strategic organization of community councils plays a fundamental role. There are three different types of the councils:

Over 3000 Peace Corps W Volunteers have served in Senegal since 1963.

Bauhaus in Africa: the hospital in sweltering Senegal inspired – and funded – by the Albers, Nov 11[1]

"Micro Power Economy for Rural Electrification". The goal of this enterprise involving local partners from the private and microfinance sector is to set up a profitable rural power provider based on off-grid power system operation and the utilisation of renewable energy sources, such as wind-solar-diesel hybrid power systems.

Kayor Rural Energy, Rural Electrification by Photovoltaic Solar Energy". An outstanding pilot enterprise launched by a community-based organisation that aims to provide solar energy solutions for rural communities. The partnership with microfinance institutions permits KAYER clients to finance their equipment with microcredit adapted to their means.

Page data
Retrieved from "https://www.appropedia.org/w/index.php?title=Senegal_community_action&oldid=657491"
Cookies help us deliver our services. By using our services, you agree to our use of cookies.
Categories:
About Appropedia · Policies · Contact · Content is available under CC-BY-SA-4.0 unless otherwise noted.