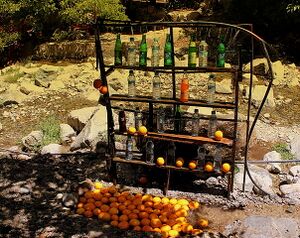 Morocco, officially the Kingdom of Morocco, is the westernmost country in the Maghreb region of North Africa. It overlooks the Mediterranean Sea to the north and the Atlantic Ocean to the west, and has land borders with Algeria to the east, and the disputed territory of Western Sahara to the south. Morocco also claims the Spanish exclaves of Ceuta, Melilla and Peñón de Vélez de la Gomera, and several small Spanish-controlled islands off its coast. It spans an area of 446,300 km2 (172,300 sq mi) or 710,850 km2 (274,460 sq mi), with a population of roughly 37 million. Its official and predominant religion is Islam, and the official languages are Arabic and Berber; the Moroccan dialect of Arabic and French are also widely spoken. Moroccan identity and culture is a vibrant mix of Berber, Arab, and European cultures. Its capital is Rabat, while its largest city is Casablanca.

Climate change is expected to significantly impact Morocco on multiple dimensions. As a coastal country with hot and arid climates, environmental impacts are likely to be wide and varied. As of the 2019 Climate Change Performance Index, Morocco was ranked second in preparedness behind Sweden. W

Paradise Valley in Morocco is one of the oldest forest gardens in the world (allegedly 2000 years). It is located near the coast, between the villages Inraren and Tamzergourte. 800 people from the area work in forest. The over-story is mainly date palm, and the under-story includes carob, banana, quince, olive, fig, pomegranate, guava, citrus, mulberry, tamarind, and grape. Despite being surrounded by arid desert, the forest is cool and lush.

In Morocco, a blue tourist town is turning green, Nov 14[1]

From BRT to tram lines, How Morocco is boosting public transport, Nov 7[3]

Morocco poised to become a solar superpower with launch of desert mega-project, October 26[6]

Morocco: A Charter for the Environment,[8] January 28