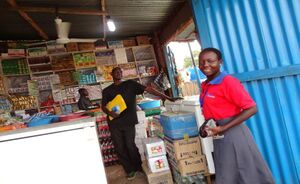 A business in South Sudan benefiting from microfinance
Location data
From Wikipedia:South Sudan

South Sudan (; Dinka: Paguot Thudän), officially the Republic of South Sudan (Dinka: Paankɔc Cuëny Thudän), is a landlocked country in Central Africa. It is bordered by Ethiopia, Sudan, Central African Republic, Democratic Republic of the Congo, Uganda and Kenya. Its population was estimated as 12,778,250 in 2019. Juba is the capital and largest city.

In 2006, President Kiir announced that his government would do everything possible to protect and propagate South Sudanese fauna and flora, and seek to reduce the effects of wildfires, waste dumping, and water pollution. The environment is threatened by the development of the economy and infrastructure.

From Wikipedia:Water supply in South Sudan

Water supply in Southern Sudan is faced with numerous challenges. Although the White Nile runs through the country, water is scarce during the dry season in areas that are not located on the river.

About half the population does not have access to an improved water source, defined as a protected well, standpipe or a handpump within 1 km. The few existing piped water supply systems are often not well maintained and the water they provide is often not safe to drink.

Displaced people returning home put a huge strain on infrastructure, and the government institutions in charge of the sector are weak. Substantial external funding from numerous government agencies and non-governmental organizations is available to improve water supply.

Water is Basic is a non-profit NGO that drills clean water wells in South Sudan. The organization was founded in 2006 during a meeting of Sudanese church leaders, who decided that the local church's first steps after the signing of the Comprehensive Peace Agreement ought to be fulfilling physical needs. It is estimated that between 50% and 60% of the population of South Sudan has access to an improved water source, such as a hand pump, a protected well or – for a small minority – piped water supply.

Water is Basic is the largest clean water non-profit organization in South Sudan.

Water is Basic completed its first well on June 28, 2008 and has since completed over 500 boreholes and repaired 75 others to working condition throughout states of Central and Western Equatoria and Jonglei. Currently, Water is Basic is led by Bishop Elias Taban, founder of the Sudan Evangelical Presbyterian Church and 2013 Clinton Global Citizen Award by the Clinton Foundation recipient.

On March 10, 2014, Water is Basic and the Permanent Mission of South Sudan to the United Nations hosted an event, titled "Women and Water in South Sudan," as a contribution to the 58th United Nations Commission on the Status of Women. In August 2014, Water is Basic leaders joined 91 other individuals and organizations — including former US government officials, members of the UK Parliament, and leaders of advocacy and humanitarian organizations — to sign a letter sent to South Sudan's President Salva Kiir and former Vice President Dr. Riek Machar urging an end to the violence between the government and opposition leaders.

Numerous non-governmental organizations support water supply in Southern Sudan, such as the Obakki Foundation from North America, Caritas, GOAL from Ireland, Concern Worldwide from Ireland, the International Rescue Committee, Medair, Oxfam and Save the Children UK, and the locally led Water is Basic. Many of these groups finance their work through donations, but also through official development aid, such as the Basic Services Fund. W

Page data
Retrieved from "https://www.appropedia.org/w/index.php?title=South_Sudan_community_action&oldid=656230"
Cookies help us deliver our services. By using our services, you agree to our use of cookies.
Categories:
About Appropedia · Policies · Contact · Content is available under CC-BY-SA-4.0 unless otherwise noted.