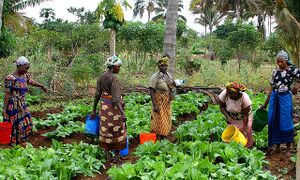 Approximately 38% of Tanzania's land area is set aside in protected areas for conservation. Tanzania has 16 national parks, plus a variety of game and forest reserves, including the Ngorongoro Conservation Area.

Daraja, aims to make positive changes to life in rural Tanzania by bringing people and government closer together

The city of Dar es Salaam is on the coast of Tanzania and in the rainy season is vulnerable to large scale flooding. Additionally, there are no current or reliable maps which can be used by aid respondents in the event of flooding. Maps are created specifically in flood prone wards with the aim of providing information for flood resistance.

#50MillionTrees: how young people are fighting deforestation in Tanzania, Jun 5[1]

How Tanzania plans to light up a million homes with solar power, October 29[5]

Page data
Retrieved from "https://www.appropedia.org/w/index.php?title=Tanzania_community_action&oldid=657306"
Cookies help us deliver our services. By using our services, you agree to our use of cookies.
Categories:
About Appropedia · Policies · Contact · Content is available under CC-BY-SA-4.0 unless otherwise noted.