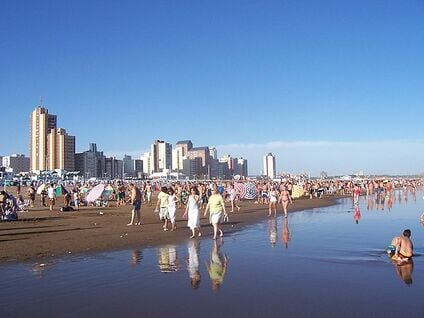 Argentina, officially the Argentine Republic (Spanish: República Argentina), is a country located mostly in the southern half of South America. Sharing the bulk of the Southern Cone with Chile to the west, the country is also bordered by Bolivia and Paraguay to the north, Brazil to the northeast, Uruguay and the South Atlantic Ocean to the east, and the Drake Passage to the south. With a mainland area of 2,780,400 km2 (1,073,500 sq mi), Argentina is the eighth-largest country in the world, the fourth largest in the Americas, the second largest in South America after Brazil, and the largest Spanish-speaking nation by area.

The sovereign state is subdivided into twenty-three provinces (Spanish: provincias, singular provincia) and one autonomous city (ciudad autónoma), Buenos Aires, which is the federal capital of the nation (Spanish: Capital Federal) as decided by Congress. The provinces and the capital have their own constitutions, but exist under a federal system. Argentina claims sovereignty over part of Antarctica, the Falkland Islands (Spanish: Islas Malvinas), and South Georgia and the South Sandwich Islands.W

Ciclovía: Rosario was the first city in Argentina to hold an official Ciclovia, called Calle Recreativa. Each Sunday and holiday few important avenues of Rosario, are blocked off for the event to become carfree. From 8 am to 1 pm, runners, skaters and bicyclists take over the streets. Rosario's weekly ciclovías are used by approximately 30.000 thousand people on over 13 km of carfree streets. Buenos Aires started its Ciclovías network in 2009, and as of 2013 it covers more than 100 km and continues expanding. [1]

The National Parks of Argentina make up a network of 33 national parks in Argentina. The parks cover a very varied set of terrains and biotopes, from Baritú National Park on the northern border with Bolivia to Tierra del Fuego National Park in the far south of the continent. The Administración de Parques Nacionales (National Parks Administration) is the agency that preserves and manages these national parks along with Natural monuments and National Reserves within the country.

The headquarters of the National Parks Service are in downtown Buenos Aires, on Santa Fe Avenue. A library and information centre are open to the public. The administration also covers the national monuments, such as the Jaramillo Petrified Forest, and natural and educational reserves. W

A Grassroots Repair Club in Argentina is Breaking the Cycle of Consumerism, Mar 15 [3]

The largest oil spill in fresh water was caused by a Shell Petroleum tanker in the Río de la Plata, off Magdalena, on January 15, 1999, polluting the environment, drinking water, and local wildlife.

The major environmental issues in Argentina are pollution and the loss of agricultural lands. The soil is threatened by erosion, salinization, and deforestation. Air pollution is also a problem due to chemical agents from industrial sources. The water supply is threatened by uncontrolled dumping of pesticides, hydrocarbons, and heavy metals. Argentina has a renewable water supply of 276 cubic km. In 2002, some 97% of all city dwellers and over 70% of rural dwellers had access to improved water sources. In 2000, about 12.7% of the land area contained forest and woodland.