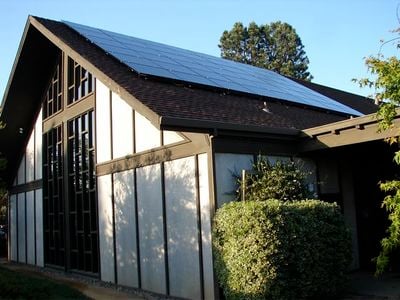 This report provides a summary of the motivation, design, and installation of a solar photovoltaic (PV) generation system at St. Jude the Apostle Episcopal Church, Cupertino, CA
http://web.archive.org/web/20201026073046/https://saintjudes.org/

Global climate change, triggered by greenhouse gas emissions, has become a serious concern for most people, and 82% of these emissions are from burning fossil fuels to generate our electricity and power our cars. In addition, the global supply of fossil fuels is limited and concentrated such that obtaining fuel is the source of many economic and political problems. Moreover, with only 5 percent of the world's population, Americans consume 26 percent of the world's energy. Yet we are the nation that is most able to affort investment in clean alternatives. We must begin the process of "source-shifting" our energy needs toward clean, renewable sources. We are called to be good stewards of the earth's environment. It is time to do something.

Solar PV is a good choice for renewable energy. The earth receives more energy from the sun in one hour than the world uses in a whole year. Solar PV is completely clean and entirely renewable, and it saves about 1.55 pounds of CO2 per kWh produced. A typical home system (3kW) in Silicon Valley can prevent 6500 pounds of CO2 emissions per year, saving about 43% of the average emission per person. The energy production typically pays back the energy required to produce the PV system in about 18 months.

Solar PV systems offer great economic benefits. The cost of PV has fallen by 90 percent since the early 1970s. As more individuals choose PV, the industry becomes more efficient and costs continue to drop. In Northern California, state and federal tax incentives cut the cost of installing PV systems by about 35%. The local utility, PG&E, offers net-metering, allowing customers to sell PV power to them up to the point of break-even on an annual basis. Special time-of-use electricity rates make the payback time for PV much shorter, since PG&E pays the highest rates during peak solar production times. The simple payback on many PV systems is only 8 – 12 years

Why PV at church?[edit | edit source]

Installing PV at a religious institution allows pooling of resources, so that people can contribute a small amount toward a larger system. The large PV system commensurate with energy usage at an institution provides a substantial environmental benefit. The church property should be here for many years, guaranteeing a good return on investment. Moreover, a PV system represents a statement of values, letting our children and community know that we care about environmental stewardship

The first step in designing the PV system is to assess the monthly electricity usage at the facility. The St. Jude's campus includes three electric meters, with monthly usage shown in the following graph. Net-metering provides the maximum payback by zeroing the annual electricity cost of each meter. For the first phase, St. Jude's chose to install a system to zero the cost for the church building meter, which accounted for more than half of the total consumption.

St. Jude's obtained quotations from five different companies that specialize in PV installations and selected Akeena Solar of Los Gatos, CA, to install the Phase I system. http://www.akeena.net/
The system was designed to zero the annual electricity bill for the church building. Key specifications from the Akeena proposal are given in the following table.

As shown in the table, one third of the installation cost was to be paid by California Solar Initiative (CSI) rebate. The remaining $43,000 was donated by four individual gifts by members of the church.

St. Jude's church building has a large, south-facing roof, nearly ideal for installation of the solar panels. The following pictures show the progression of the panel installation, which took place over a period of four days.

St. Jude's first phase PV system became operational on July 17, 2007. The following table shows the key dates in this project, which took about 8 months to complete.

No funds were required from the church budget or reserves for installing the PV system. St. Jude's expects an annual energy bill reduction of about $3600 in the first year, and more in subsequent years due to increasing energy costs. The PV system is fully warranted, including installation, for 10 years, and the panels are warranted for 25 years. The system is nearly maintenance free, requiring only that the panels should be rinsed off a couple of times each year, and the electric bills should be monitored occasionally to detect any deviations from the expected performance.