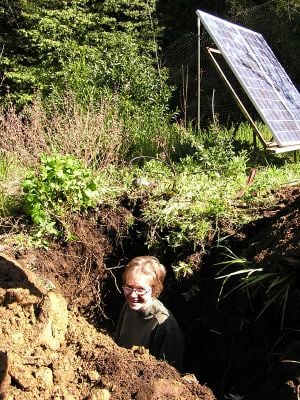 This project was to install a photovoltaic (PV) array with sufficient capacity to support all of the household demands, including a electric refrigerator, as well as a wood shop. There is a micro-hydro system on the property as well that delivers power in the winter when the creek is running strongly but can not keep up with demand in the summer when the rains have stopped. For this reason we had to install a power source for the summer months. Briceland gets a lot of sun in the summer, so with the installation of this PV array there is now plenty of power all year-round.

The PV array is made up of 8-120 watt modules so at peak power we should get 960 watts. Each panel is 12 volts and 6.82 amps. The panels are set up so that four of them are in series and the two sets of four panels are in parallel. In this way it is a 48 volt, 13.64 amp system. The panels are made by Evergreen Solar which is one of the only solar panel companies that is not owned by a big oil corporation. The String Ribbon technique Evergreen uses to fabricate their panels consumes half as much silicon as conventional processes.

The first step was to get the post in the ground and the rack set up. Following is a detailed list of how this was done.

While the concrete was setting up we built the rack which came ready to assemble and was very easy to put together. It consists of a central bracket that sits on top of the post that acts as a pivot point, and lateral bars that the panels connect to. Once it was assembled on the ground we lifted it up and set it on top of the post. 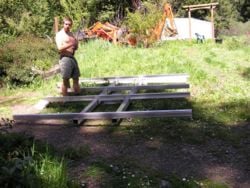 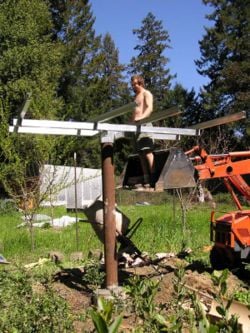 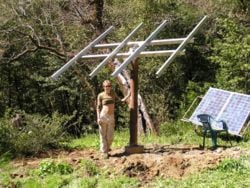 Once the rack was together it was time to install the panels. Both of these were designed to fit together very easily. Each panel attached to the rack in four places with a bracket that slid into one of the cross beams and then was bolted to the panel. These sliders allow the panels to be moved around once they are on the rack. As we put them on we tried to keep the weight balanced so we could still flip the rack to reach both sides. 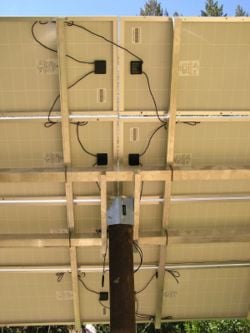 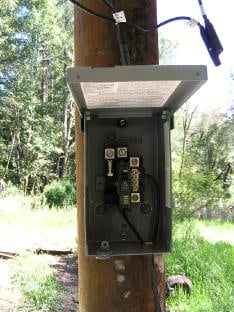 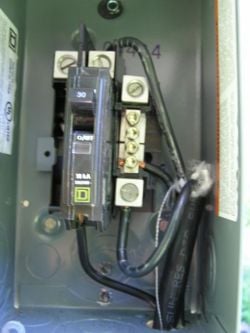 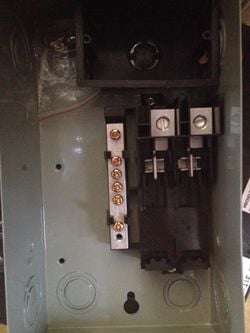 After the charge controller there is another fuse box before the batteries. Right now there are only two L-16 batteries in place which are too few for the power input from the array. Eventually we will have the charge controller hooked up to eight L-16 batteries. From the batteries the power goes two places. The first is to the DC circuits in the house and the second is to the inverter, each of these having individual fuses.

This we will know when we are able to hook the whole system up. 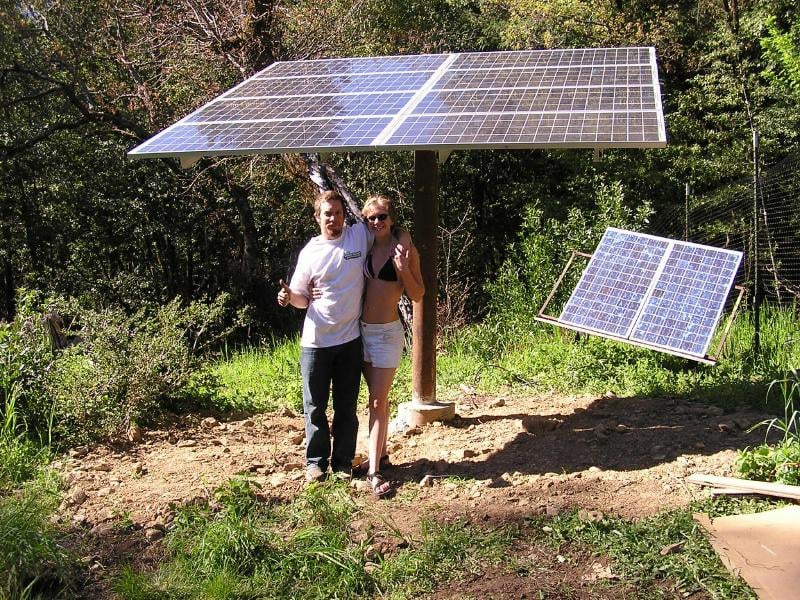 Menu
Photovoltaics
Page data
Retrieved from "https://www.appropedia.org/w/index.php?title=Briceland_PV&oldid=641175"
Cookies help us deliver our services. By using our services, you agree to our use of cookies.
Categories:
Comments
Privacy policy · About Appropedia · Disclaimers · Mobile view · Content is available under CC-BY-SA-4.0 unless otherwise noted.
</html