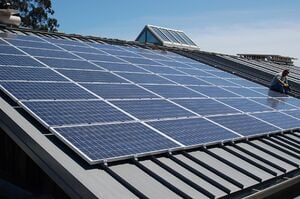 Potawot Health Village is a non-profit organization built by the United Indian Health Services (UIHS) "to integrate individual, community, and environmental health".[1] Located in Arcata, California, Potawot provides medical, dental, and mental healthcare, as well as nutritional services for the nine tribes and over 13,000 Native Americans it serves.[2] A crucial element in the facility's environmentally-friendly design is the implementation of a photovoltaic solar system installed on roofs of the Administration and Facilities Buildings in 2007.

In anticipation of utilizing solar energy, Potawot planned their building locations so they could support and facilitate an optimal array of solar panels.[3] The utility room, which serves as the central power inversion and grid-connection center, is located in the Facilities Building whose south-facing roof supports the majority of panels. Located directly next to this building is the Administration Building whose roof supports the remaining panels on its southwest-facing roof. Initially the Administration Building was not intended to have solar panels installed; Potawot originally planned to install the remaining solar panels on pole mounts. However after investigation, it was determined that installing more panels on the southwest-facing roof, although 12% less efficient than south-facing pole mounts, was a better alternative since pole mounts are expensive (~$9,000 each) and present a higher danger for theft. 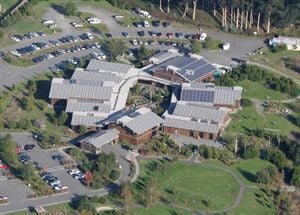 The overall size of Potawot's solar energy system is 42 Kilowatts, which is equivalent to the energy needed to support 15-18 average size American homes.[4] On most sunny days, the system provides roughly 25% of Potawot's total energy needs, saving $2,000-$3,000 per month. This savings is then allocated towards community outreach and educational programs. On sunny weekends, when Potawot's energy demand is low, excess solar energy is sold back to Pacific Gas & Electric via the grid at the current market price. 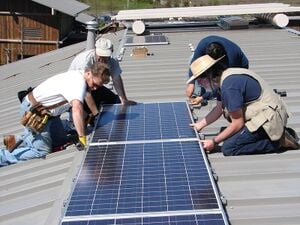 The system consists of 216, 180-Watt Evergreen solar PV modules. Most of the panels (144) are mounted on the Facilities Building roof while the rest (72) are mounted on the Administration Building roof (Figure 2). Since the panels are rated at 38.9 kW DC, the current must be inverted to produce alternating current. This is accomplished by first organizing the panels in 6 sub-arrays (36 modules each). Each sub-array is then wired to a Sunnyboy 600 Watt AC inverter mounted on the roof of the Facilities Building (Figure 4). Connected through this inverter is a Webbox (Figure 5) which collects and logs operational information such as energy production, savings, and efficiency. Shortly thereafter this information is accessible anywhere in the world via the internet. 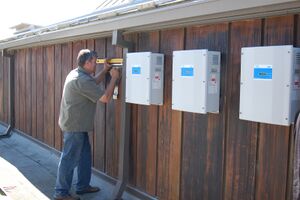 When electric power flows in the opposite direction from its usual flow, an incident known as backfeed occurs. In order to prevent backfeed in the event of a power outage, Trinidad Electric was contracted to complete advanced electrical work involving large breakers and disconnects in the utility room. 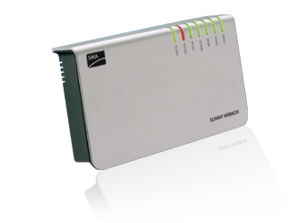 Many individuals and organizations were involved in making this project a success. UIHS, with the crucial help of Ina Harris, was able to secure an initial $20,000 in seed funds from the Will Reid Foundation. With the initial help from solar energy supporters at The Will Reid Foundation, Cher-ae Heights Indian Community of the Trinidad Rancheria, Resighini Rancheria, Smith River Rancheria, and Humboldt Water Resources, Potawot was able to secure a grant from the California Health Facility Financing Authority to complete the first phase. Pacific Gas & Electric also contributed nearly $90,000 in rebates for the project.[3]

Under the leadership of Roger and his Merry Band of Solar Installers, several Potawot employees were able to assist in the solar panel installation. This both reduced labor costs and created a sense of community among those who participated.[3] The savings attributed to Roger's help along with "visually defective" panels discounted by Evergreen resulted in project costs below what would normally be expected for a project of this magnitude.

Potawot is hoping to expand their solar energy system, incorporating more panels to the array for a larger energy output. The ultimate goal is to have their entire energy demand supplied by solar energy. Potawot is currently waiting on grant opportunities from Pacific Gas & Electric and other alternative energy supporters to fund an expansion project.

In 2010, the Potawot health village was able to find enough funding to expand the solar array from a 42 Kilowatt system to over 100 Kilowatt. It has been estimated that this new array is producing about 70% of the energy for the village. This improvement has tremendously helped the village by redirecting the revenues towards research programs for the health and wellness of the Native Americans. "This new solar array has been very beneficial in providing energy for the health center," was mentioned by a UIHS land management member. 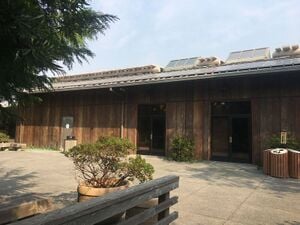 solar array from the side 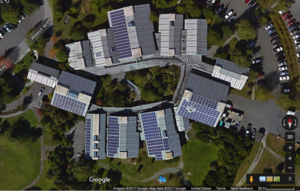 Menu
Photovoltaics
Page data
Retrieved from "https://www.appropedia.org/w/index.php?title=Potawot_Health_Village_Solar_Energy:_Installation_and_History&oldid=621341"
Cookies help us deliver our services. By using our services, you agree to our use of cookies.
Categories:
Comments
Privacy policy · About Appropedia · Disclaimers · Mobile view · Content is available under CC-BY-SA-4.0 unless otherwise noted.
</html