The following tutorial will cover topics related to the theory and hardware used to measure the available solar resource at a site, and methods for translating this radiation onto the inclined plane of a PV panel.

Everyday when we look outside, we are in a way measuring the solar resource. We know that a higher irradiance will mean that our skin will feel hotter in the sun, and a lower solar resource will mean we feel cooler. Therefore, if we were trying to take a relative measurement of irradiance, a fairly simple thermal measurement on a constant surface would give a reading proportional to the irradiance in the area. As the solar radiation heats the surface, it will eventually reach an equilibrium temperature where the heat flux leaving through convection, conduction and radiation is the same as the incoming irradiation.

What was just described is a simple pyranometer, which is a standard instrument used in the field to measure the available solar resource. However, this instrument will only be able to tell whether there is more or less radiation in the area, but because it is not related back to easily understood physical processes, it is not possible to determine the absolute resource in terms of solar power. In the context of photovoltaic design, the only useful data on solar irradiation is that absolute resource stated in watts(W), usually watts per meter squared.

Therefore, calibration of the unit is required which can relate the temperature differences measured to absolute solar irradiation. This is a complex procedure, and a brief discussion of the history of these measurements is required to understand how we got to the measurements we use today.

The modern measurement of solar radiation in North America was originally aimed at better understanding the relationship between the sun and the earth's climate, and was pioneered by both the Smithsonian institution and the national geographic society, with the goal of determining the "solar constant" or the amount of energy available at the edge of our atmosphere. The first studies were performed with a device known as a Bolometer, invented by Samuel Pierpont Langley, the future secretary of the Smithsonian Institution in 1878. This was an extremely sensitive device for measuring temperatures, accurate to 0.00001C, and has the honour of supposedly able to measure the thermal radiation of a cow at a quarter mile [1] . The bolometer was used with a prism which split the light into its spectrum. The rise in temperature was measured as a current shown with a galvanometer, an extremely precise device for measuring current, which consisted of a needle made from a strand of quartz 2/25,000 inch in diameter and 15 centimeters long onto which a mirror only 1/25 inch square and 2/1000 inch thick is placed. As an electrical current is passed through this galvometer, this tiny thread will rotate on a pivot, also rotating the mirror. The mirror directs a beam of light onto a photosensitive sheet of paper, and the amount of deflection from home is proportional to the current. It is in this way that extremely sensitive measurements of the solar spectrum were originally made.[2]

The pyroheliometer is a device designed to measure the total energy available from the entire solar spectrum. The original pyroheliometer was designed in 1837 by Claude Pouillet which was a simple but crude instrument based on water calorimetry which eventually was proven to be inconsistent and inaccurate. Following this, an instrument was made in 1887 by Klaus Angstrom called the compensation pyroheliometer. This instrument consisted of two thin magnesium strips in thermally identical chambers. One chamber was open to the sunlight, and the other was closed by a shutter, and heated electrically by a known power. When the temperature in both chambers agreed, a measurement of the electrical power was taken. The shutter was then reversed, and another measurement was made. By comparing these two measurements, a determination of the total irradiation was made [3]

This instrument was considered to be an early standard instrument, and formed the basis for the Angstrom Scale (denoted AS05), founded in 1905.

In order to correlate these temperature changes with the actual power being input into the system, a very complex analysis of this device would be required. Instead, this device was callibrated using another instrument, the water flow pyroheliometer. Essentially, light was admitted in the same way as the silver disc pyranometer, and the beam of light is directed onto a conical receiver, which is assumed to absorb 97% of incoming radiation. Because of the conical shape of the receiver, the reflected light is directed to the walls of the tube, which are also blackened and absorb 97% of the incident light for each time it is reflected. In this way, it is assumed that nearly all of the incoming radiation is absorbed. Water at a constant flow rate and temperature is then allowed to flow in passages in good thermal contact with the walls of the chamber. The rise in temperature at steady state can be measured and from this an exact determination of the incoming power can be determined.[5]

The combination of these two instruments formed the Smithsonian scale, denoted SS13 in 1913.

In 1956 these two scales were amalgamated to form the International Pyroheliometric Scale, IPS56 which applied corrections to readings made with instruments from either scale.

The most recent radiometric scale is the World Radiometric Reference, which is composed of 15 absolute cavity radiometers, each from different manufacturers and tested continually to ensure no drift of malfunctions occur over time. These instruments make up the World Standard Group (WSG) , which is located and maintained at the World Radiation Centre in Davos, Switzerland. {WMO PAPER} This is the current standard to which all measurement devices are compared, and has an estimated accuracy of 0.3% and precision of 0.1%.[6]

Each country has a separate absolute cavity instrument which resides in its country, but which is re-calibrated every five years at the WSG in Davos. These instruments are known as Primary standard instruments, and are used primarily to calibrate commercial pyranometers.

The measurement of the solar resource for PV applications is vital for making rational decisions on the size, type, and general design of a PV array. The accuracy required varies widely on the proposed application of the data, and thus there is a broad range of available instruments. The purpose of this section is to provide a better understanding of pyranometer function and applications, and it is recommended to first read this for a comprehensive overview of the solar resource and solar angles.

Before entering into a discussion on pyranometers, some terms to define radiation types should be clarified:

Beam Radiation: Beam radiation is the radiation which exists within a 6° cone of the solar disk. This definition comes from the measurements made by most standard pyroheliometers which have a 5° field of view.

Global radiation: The total radiation in an area, the sum of diffuse and beam radiation.

Isotropic radiation: Radiation which is assumed to have an equal value in all directions. Diffuse radiation is more isotropic than beam radiation

There are essentially two categories of devices used for measuring the solar resource: pyranometers and pyroheliometers

The most common instrument used in PV applications, there are two general types thermal and photovoltaic. A photovoltaic sensor is essentially an extremely accurate solar cell which outputs an electrical current proportional to the solar radiation, and this electrical current is calibrated to represent the solar irradiation in W/m2. This type of sensor in generally low cost, but the largest problem is that a photovoltaic panel does not have a constant response across all wavelengths. Therefore, if the spectrum being seen by the detector is different from the one it is calibrated for (typically the AM 1.5 solar spectrum) a significant error will be introduced.

The pyroheliometer is an extremely accurate device which measures beam and circumsolar radiation, usually within a 5° cone of the solar disk.

These instruments are the highest grade of commercial pyranometer available, and are compared directly to primary standard devices, according to ISO 9060 and ISO 9846. They typically have error in the range of 1%-3%

A first class instrument has less accuracy than a secondary standard instrument, and generally has an accuracy of 5%-8%.

The following parameters are used to classify pyranometers, and some typical significances of each parameter are outlined

Shading rings block direct beam radiation from hitting the pyranometer sensor, and thus measures the diffuse component of radiation. The use of two pyranometers, one shaded and one not, allows the measurement of global, diffuse and beam radiation (beam=global-diffuse). The use of a shade ring requires weekly physical adjustments. A solar tracker can also be used, which automatically places a shading sphere between the pyranometer and the sun, shading it for the entire day without the need for physical adjustment.

A ventilator keeps the pyranometer at a constant temperature, and helps keep the glass dome clear from dew, frost and snow. In addition, it reduces the effects of temperature drift.

There have been many reports on the relative accuracy of pyranometers, one significant study was produced by NREL and characterizes many commercial pyranometers in an independent test bed. It can be accessed at: http://www.nrel.gov/docs/fy09osti/44627.pdf|NREL Paper

Most measurements of solar resource are measured at horizontal, however a typical PV panel will be at an angle to the horizontal, which means that the solar radiation on this plane will be different than this horizontal value. This is the reason that it is important to angle a PV array at the optimal angle to the sun to maximize yield. In order to determine in-plane radiation, the components of radiation incident on a panel should be investigated [7]:

Where the diffuse components can be defined as:

Isotropic: Can be considered to be emanating uniformly from the sky.

Horizon Brightening: Radiation on the fringes of the horizon.

Translating the beam radiation onto the plane of the panels is a fairly straightforward matter of geometry. The factor Rb is the ratio of in plane beam to horizontal beam (Ib), and is given by:

As an example, curves of Rb over 2 days for angles of 10 to 70 degrees can be seen below 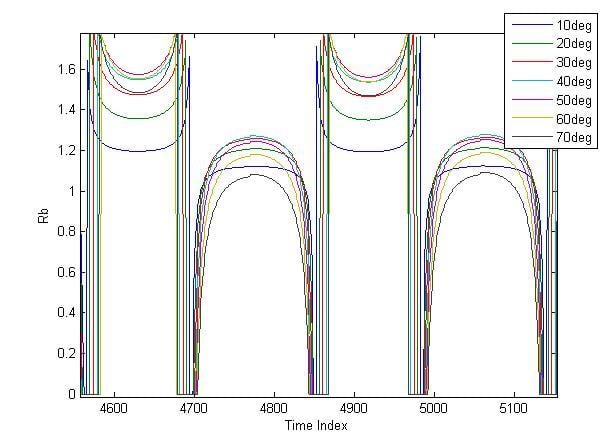 The treatment of the diffuse radiation is more complex, and several models have been put forward to account for it.

This is the simplest model, and also the most inaccurate. The essential assumption in this model is to assume that all diffuse radiation is isotropic, and the equation can be reduced: 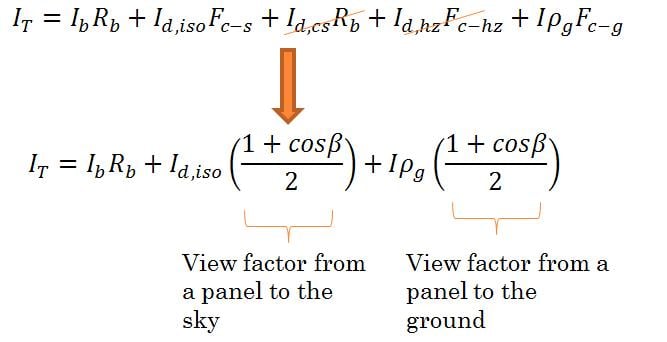 This model uses the anisotropy index, Ai, which is the ratio of beam to global radiation and considers forward scattered radiation:

One of the most complex and accurate models for determining total in-plane irradiation, this model uses multiple empirical relations to create a very accurate representation [8] :

Correlations if only horizontal global radiation is available[edit | edit source]

Sometimes, only one pyranometer has been used, and only global radiation information is available. In this case, there are multiple correlations which allow the average beam and diffuse radiation to be determined. These correlations are mostly of a similar form, and are relations between the ratio of global to extraterrestrial radiation (Kt) and the ratio of diffuse to total radiation.