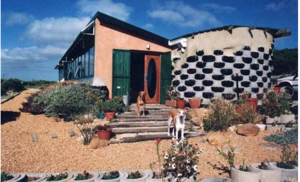 Earthship built by Angel and Yvonne Kamp in South Africa

The first earthship in South Africa was built by Angel and Yvonne Kamp from 1996 to 1998. They rammed a total of 1,500 tires for the walls. The Earthship, near Hermanus, is located in a 60 hectare private nature reserve which is part of a 500 hectare area enclosed in a game fence and borders the Walker Bay Nature Reserve.[1]

The second earthship in South Africa is a recycling centre in Khayelitsha run as a swop shop concept. The centre was finished in December 2010.[2] Another low cost house built with tyres is in development in Bloemfontein.[3][4]

A project nearing completion in South Africa is a combined living quarters for 4 to 5 people, a bed and breakfast, and an information/training centre in Orania, Northern Cape.[5] This earthship is based on the global earthship model and is built with a foundation of tyres, has roof bearing walls built with earthbags, and interior walls built with cob, cans and plastic bottles. This earthship adheres to all six principles of an earthship. This is the largest earthbag earthship in the world.[6]

A residential house was in the planning phase for Swaziland in 2013.[7]

In 2011, construction began on the Goderich Waldorf School of Sierra Leone. The school was the first educational institution to use earthship architecture. Although Mike Reynolds and a team of interns helped complete the first two classrooms, the majority of the building was built by community members who had been trained in Reynolds' building techniques.[8][9]

A new project was scheduled to commence in Malawi in October 2013.[10]

In 2000, Mike Reynolds and his team came to build the first residential earthship in Boingt, Belgium While water, power module, solar panels and the team were on their way to Europe, the mayor of Boingt put his veto on the building permit. Josephine Overeem, the woman who wanted to build the earthship, and Michael Reynolds decided to do a demonstration model in her back yard at her residence in Strombeek. CLEVEL[11] invited Reynolds from Belgium to Brighton in the UK, and orchestrated plans for the earthship in Brighton, started in 2003. This was the beginning of a series of trips made by Reynolds and the construction of earthships in the UK, France and the Netherlands.

In 2004, the very first Earthship in the UK was opened at Kinghorn Loch in Fife, Scotland. It was built by volunteers of the SCI charity. In 2005, the first earthship in England was established in Stanmer Park, Brighton with the Low Carbon Trust. In 2007, CLEVEL and Earthship Biotecture obtained planning permission to build on a development site overlooking the Brighton Marina in the UK. The application followed a six-month feasibility study, orchestrated by Daren Howarth, Kevan Trott and Michael Reynolds and funded by the UK Environment Agency and the Energy Savings Trust. The successful application was for sixteen one, two, and three-bedroom earthship homes on this site, expected to have a sale price of 250 - 400,000 pounds.[12] The homes are all designed according to basic earthship principles developed in the United States and adapted to the UK. 15,000 tires will be recycled to construct these homes (the UK burns approximately 40 million tires each year). The plans include the enhancement of habitats on the site for lizards that already live there, which is the reasoning behind entitling the project "The Lizard". This would have been the first development of its kind in Europe.[13]

The first official Earthship home in mainland Europe with official planning permission approval was built in a small French village called Ger. The home, which is owned by Kevan and Gillian Trott, was built in April 2007 by Kevan, Mike Reynolds and an Earthship Crew from Taos. The design was modified for a European climate and is seen as the first of many for the European arena. It is currently used as a holiday home for eco-tourists.[14]

Further adaptation to the European context was undertaken by Daren Howarth and Adrianne Nortje in Brittany, France. They obtained full planning permission in 2007 and finished the Brittany Groundhouse as their own home during 2009. The build experience and learning is documented in the UK Grand Designs series and in their book.[15]

Earthships have been built or are being built in Portugal, Spain, France, Belgium, The Netherlands, United Kingdom, Sweden, Denmark, Germany, Estonia and Czech Republic. A good overview of the earthships built in Europe can be found on the web page of European Earthship Builder United,[16] together with information on earthships being built.[17] A good chronological overview on the earthships built in Europe by Mike Reynolds can be found in the article 'Europe'.[18]

The first official earthship district (23 earthships) in Europe was developed in Olst, Netherlands in 2012. Building will start in spring 2012.[19] In Belgium, 1 earthship hybrid is also being built, intended as demonstration buildings. Since it is illegal to use tires in Belgium (for risk of leaking toxic metals like lead and zinc),[20] the project uses earthbags instead.

The Earthships built in Europe by Mike Reynolds do not always perform as promised. Some show problems with moisture and mould.[21] Some research into thermal performance was done by the University of Brighton on the Brighton Earthship.[22][23]

The first Earthship in South America was built in January 2015 in the town of Ushuaia, Patagonia, Argentina. Today this building functions as a visitor center and example of self-sustainable living.

An earthship was constructed in 2015 by the Aitkinson family in southern Belize. It featured on the June 2015 UK Channel 4 TV programme Kevin McCloud's Escape to the Wild, season 1, episode 3.

In March 2016, an Earthship school was built in Jaureguiberry, Uruguay.[25]

Page data
Retrieved from "https://www.appropedia.org/w/index.php?title=Earthship_sites&oldid=638292"
Cookies help us deliver our services. By using our services, you agree to our use of cookies.
Categories:
Maintenance categories:
About Appropedia · Policies · Contact · Content is available under CC-BY-SA-4.0 unless otherwise noted.