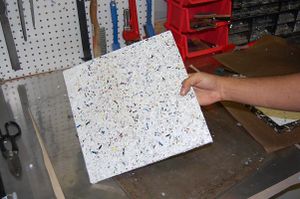 Check out the project on wasteforlife.org Hot Press Discussion Page

The organization Waste for Life (WFL) defines itself as "a loosely joined network of scientists, engineers, educators, architects, artists, designers, and cooperatives who work together to develop poverty-reducing solutions to specific ecological problems."[1] Through a collaboration with researchers and community members at Queen's University, the Centro Experimental de la Produccion (CEP) in Argentina, the Rhode Island School of Design (RISD), Smith College, and the University of Western Australia, the Kingston Hot Press has been designed and developed to provide the means of production to smaller cooperatives in communities in Argentina and Lesotho. The Hot Press allows the user to produce a value-added composite tile out of waste plastic and fiber (most commonly cardboard and paper). Currently three prototypes have been built, one at Queen's, one at RISD, and one at CEP. Detailed design drawings are available at the WFL website.

The WFL team has identified several key areas of design development that they would like to pursue:[2]

Currently the temperature consistency problem has been resolved with very expensive aluminum plates. A heat transfer model could assist in the evaluation of different solutions and hopefully provide an optimal solution that could use less costly and more widely available materials.

There are several key stakeholders that I have identified for this project. Here at Queen's I am working to assist Dr. Matovic with design improvements based on the Hot Press prototype in Kingston. More broadly, I hope my work can contribute to the Waste For Life team. Finally the end-user of the hot press is the cartoneros, the workers who partake in the informal economy of waste in Argentina.[3][4]

The hot press should provide a low-cost tool to access the means of production and add value to "waste" products. As such, materials should be as economical and accessible to the cartoneros communities as possible.

Design work must be limited to theoretical analysis as significant empirical testing would require equipment not currently available for the budget and scope of the project. Future work could include an empirical evaluation of several plate designs using an array of thermal transducers (thermistors, or thermocouples) to determine realized temperature gradients in the hot press.

At Queen's University Dr. Matovic has produced CAD drawings fully detailing the design and dimensions of the Kingston Hot Press as shown in Figure 1. The original design used 1/4" steel plates to press and heat the tiles. To overcome temperature inconsistencies which were producing burnt profiles the prototype plates were replaced with 1/2" aluminum plates.

Although the design of a hot press plate must ideally involve both a heat transfer model and a finite element static stress analysis it will be assumed for the following optimization that based on previous work by the WFL team, the 1/4" steel plate provides a minimum benchmark thickness for the plate and a lower limit for allowable bending and deformation of the plate. Therefore the following analysis will focus on better understanding the heat transfer mechanisms in the heat press, and how these effect the performance of the press.

The Kingston Hot Press presents a particularly challenging heat transfer system to model. Six 750W Omega OT-2107 strip heaters are clamped to the two "press" plates which transfer heat and pressure to the mold and tile composite material. A cork rubber gasket provides insulation between the press plates and the steel weldments which provide the necessary structural support for the device. A simple on/off controller regulates the temperature of the center of the plate with a thermocouple transducer. Standard setpoints range between 150°C and 250°C. Since a tile (or film) can be pressed within 5-35 minutes depending on the thickness of the mold, the problem almost certainly falls within the transient time period. However, the plates are preheated to the setpoint temperature, and so a steady state model can assist in determining the ideal performance of the heating plates upon the initiation of the press cycle.

The energy balance equation for a 2D control volume is given by:

This simplifies in a medium surrounded by a material with identical conductivity to the average of the neighbouring cell temperatures:

Assuming heat loss through the edges due to convective heat transfer we can derive the temperatures for edge cells and corner cells:

These equations when put into Excel or Calc can be solved iteratively (See this help for Excel). The screenshot below shows the three strip heaters (approximated as constant temperature surfaces) surrounded by the aluminum plate and the resulting temperature distribution. Although this is a rudimentary model, it provides an immediate sense of the geometry and gradient in a way that can be easily distributed and modified through OpenOffice.

If the top of a plate is unevenly heated, with finite thickness and conductivity the bottom of the plate will not have a perfectly even temperature distribution. In practice, an effectively trivial temperature gradient can be arrived at with a plate of high enough conductivity and thick enough profile to provide adequate opportunity for the surface to equilibrate.

By modeling the temperature distribution on the press plate through SolidWorks COSMOSWorks heat transfer tool an optimization of the plate material and thickness can be undertaken. SolidWorks was convenient as previous CAD work had already been done for the Kingston Hot Press in this software and was readily available to undergraduates at Queen's. Unfortunately, this software is not readily available to all interested readers and therefore I must leave it to future work to transcribe the CAD to an open source program.

After a brief review of the fascinating area of visual communication and instruction[6][7] I hope to produce a simple pictorial instruction for using the Kingston Hot Press. Pictures are not ideal for printing and distributing and therefore further work could also be done to produce a schematic visual instruction set that would be sufficient to overcome language barriers. I find this area very interesting and would love to hear from knowledgeable readers who could direct me to further resources.

Due to the computational limitations, only the top half of the Kingston Hot press was analyzed in SolidWorks. The components included in the meshing and analysis were the:

The mesh shown below was generated automatically through the SolidWorks mesh function.

The thermal analysis carried out through COSMOWorks utilized the following Load/Restraints:

Using these constraints a numerical thermal analysis was performed. The image below represents temperatures across the top of the hot press for an aluminum plate of 0.25" with the colour legend ranging from 426K-313K.

To confirm these qualitative observations a representation was produced of the temperature gradient across the bottom face of the aluminum plate shown in the image below:

A similar result showing the gradient across the bottom face of the plate to be negligible was found for the steel plate analysis.

With these new constraints, results were obtained that better reflected the behaviours described by the users of the Kingston Hot Press. The image below represents temperatures across the bottom surface of the plate for an aluminum plate of 0.25" with the colour legend ranging from 485K-318K. The temperature non-uniformity is now clear.

The new analysis shows the 0.25" steel plate having a noticeably worse temperature distribution as shown in the image below:

A comparison of the aluminum and steel 0.25" plates using a representation of the temperature gradient (using identical colour legends) now shows the aluminum having notably lower gradients across the plate then the steel. The first image below is of the aluminum plate, followed by the steel plate.

Finally, a model was developed to consider the replacement of the 1/2" aluminum plate with a 1/2" steel plate. Below are the temperature and gradient representations of the bottom surface of the steel plate respectively. Although the steel plate still does not match the aluminum for the gradient, there is a noticeable improvement over the 1/4" plate. Based on these findings it appears a 1/4" aluminum plate would provide the most economical even temperature distribution for the Kingston Hot Press.

1
Turn on the Kingston Hot Press to preheat. This will save you time later.
2 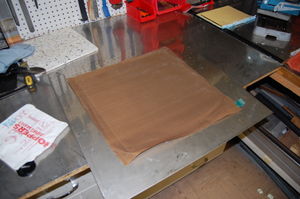 Place down the thin steel sheet.
3 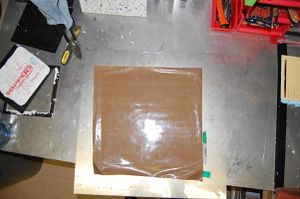 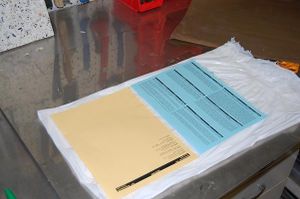 Place sheets of paper on the plastic bags.
6 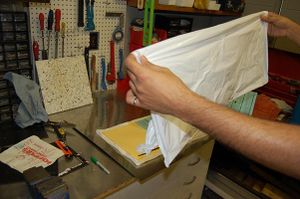 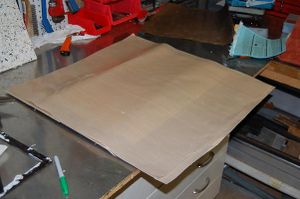 Place another release surface onto the plastic bags.
8 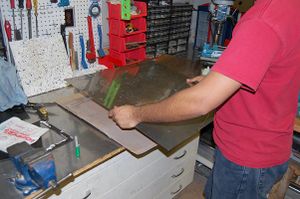 Place another thin steel sheet over the release surface.
9 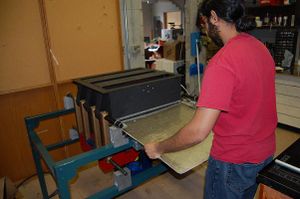 Take the thin film mold and slide it between the two press plates of the Kingston Hot Press.
10 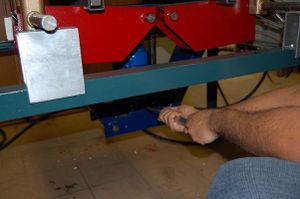 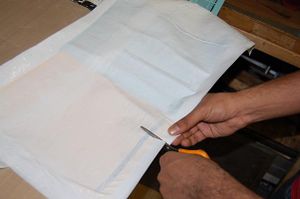 Very carefully remove the mold, but remember the plates are hot! Peeling off the release you will see the final product (first image is a thin film, second a tile).
13 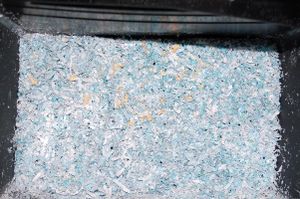 If you are making a film, it is now time to shred the material to make feedstock for the final tile. You can use scissors, or if available a shredder.
14 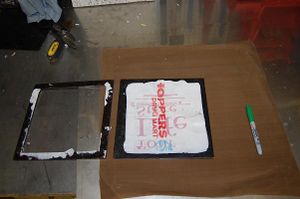 Repeat the previous steps but filling a metal mold as shown on the right instead of making layers with raw bags and paper.
15

Finally you have a tile!

I would like to sincerely thank Shanil Vaja at Queen's for his patient assitance taking me through the steps of the Hot Press process and helping me to produce the photo instructions.

The preliminary heat transfer analysis shows that there is little to no difference between a 1/4" aluminum plate, and a steel plate. Refinement of the model showed that although a 1/2" steel plate improved upon the 1/4" steel plate, the 1/4" aluminum plate provides substantially better temperature consistency then either thickness of steel plate and is the recommended plate design for the Kingston Hot Press.

To compliment this model it is recommended that given an available budget, an empirical study is done in parallel which tests the performance of a steel 1/2" plate and aluminum 1/4" plate which could provide major cost reductions for the overall system. An array of high temperature/pressure thermistors could also provide an empirical measure of the temperature distribution and gradients across the plate.

During the development of the model and visual production guide, several other potential areas of development were identified for future design work. Currently, the user must use a short and un-ergonomic lever to actuate the hydraulic piston which provides the clamping pressure for the system. The Hot Press frame currently makes the use of a longer lever impractical. The design of a lever system which can circumvent the frame while allowing the user to ergonomically actuate the piston would provide a much needed solution to a problem which currently has been ignored at significant cost to the user. If this device is to be used regularly, the current system would be very difficult to operate for prolonged periods of time.

Mineral wool has been used to cover the strip heaters to improve the efficiency and effectiveness of the heat delivery system. Although this material is very effective, it is unclear what the availability of this material is throughout the communities the WFL team is collaborating with. Furthermore, the models developed in this analysis showed that significant radiative heat loss occurred due to the dark steel weldments. A deeper investigation into the potential opportunities for improved insulation throughout the system design, with considerations for locally available materials, could prove very fruitful considering the WFL's interest in investigating other energy sources such as gas (where a fuel tank would limit supply more profoundly then a grid-tied system).

The release material currently used to prevent bonding between the tile and film products and the thin steel sheets is a high quality composite (teflon and a metallic substance) that has a seemingly short shelf-life (based on the quality of some of the older release sheets seen in the lab). The procurement of such materials on a regular basis presents a serious hurdle to potential users of this technology. An investigation of potential natural oils or waxes that could provide the same function of releasing the product post-pressing would be a worthwhile and fascinating application of green chemistry.