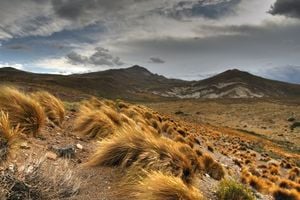 Grassland in Patagonia, Argentina. Rights for this image provided by 123RF.com.
Location data

The Patagonian grasslands are a major ecoregion located at the bottom tip of South America. The vast expanse of land extends from the Tierra del Fuego archipelago to the Santa Cruz Province in southern Argentina and encompasses the Falkland Islands on the Atlantic Ocean to the east. The Strait of Magellan waterway runs through the ecoregion just north of Tierra del Fuego and south of the mainland, breaking the grassland region into two distinct parts.[1]

The temperate grassland region is characterized by a vast extent of hills, meadows, mesas, plateaus and plains and is covered with a sparse mix of treeless shrub vegetation throughout the area.[2] High humidity and low average temperatures help mark the arid Patagonian grassland climate while roughly 200-300 millimeters of rainfall occurs annually. The region features numerous coastal zones, lagoons and marshes that host a wide variety of both native and introduced fauna that occupy Argentina.[1]

In the late 19th century, Europeans brought sheep to the Argentine region in order to be ranched for the precious merino wool to sell to international markets. Typically grazed year-round in large herds, the sheep ultimately have open access to a huge expanse of land on which to consume vegetation.[3] Over the years, the inadequate overgrazing of livestock, both cattle and sheep, in the region has led to the destruction and degradation of the natural habitat;[4] a typical sheep can consume up to 4.5 pounds of vegetation a day, thus paving the way for vegetation scarcity in southern Argentina. The harsh winters, severe winds, dry climate and overgrazing of the Patagonian grasslands have all contributed to the critical process of erosion and desertification in Argentina. As a result of these of natural disasters on top of poor grazing practices, many faunal species that rely on the vegetation and waterways within the ecoregion have become endangered due to pollution resulting from silt runoff and an overall loss of habitat. Ranching, which was once a profitable and resourceful tool in the grasslands, is now carried out with greater difficulty as some ranchers leave Patagonia after an inability to sustain enough livestock to support their livelihood.[5] The Patagonian grasslands capture and store carbon much like the forests of the world and help prevent climate change, yet grasslands in general are some of least protected and conserved habitats on the planet.[3]

The Nature Conservancy is a leading U.S. conservation organization dedicated to preserving ecologically significant lands and waters for the benefit of plants, animals and global communities alike.[6] The Patagonian Grasslands of Argentina Conservation Project is currently in the process of bringing together scientists and Patagonian land managers in order to develop the most suitable and sustainable grazing methods while implementing a network of both public and private protected areas within the region. By working with partner organizations and various government agencies, the program hopes to strengthen conservation efforts already in place while promoting the creation of new protected areas and incentives for ranchers to produce ecologically sustainable wool that enhances the productivity of their environment.[7] The organization is currently developing the Grasslands Stewardship Council (GSC) that will offer global consumers a chance to buy products from the region that are backed by sustainable practices and environmentally friendly ranching to capitalize on benefits similar to those of the Forest Stewardship Coucil (FSC) and the Marine Stewardship Council (MSC). The formation of the council, along with assorted environmentally conscious corporate sponsorships, would allow for a level of certification and environmental standards that would help preserve the grasslands.[5]

Page data
Retrieved from "https://www.appropedia.org/w/index.php?title=The_Patagonian_Grassland_Conservation_Project&oldid=651780"
Cookies help us deliver our services. By using our services, you agree to our use of cookies.
Categories:
About Appropedia · Policies · Contact · Content is available under CC-BY-SA-4.0 unless otherwise noted.