From Appropedia
Redirected from Edinburgh 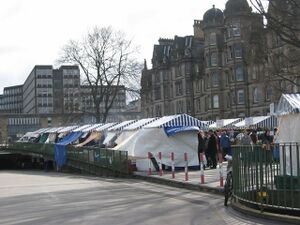 Edinburgh is the capital of Scotland and one of its 32 council areas. It is located in Lothian on the Firth of Forth's southern shore.

The city is known for the Edinburgh International Festival and the Fringe, the latter being the world's largest annual international arts festival. Edinburgh's Old Town and New Town together are listed as a UNESCO World Heritage site. W

From Wikipedia:Transport in Edinburgh § Cycling

Since 1999 the percentage of all trips in the city of Edinburgh made by bicycle has risen by an eighth, however travelling by bicycle still accounts for less than 2% of all trips taken by Edinburgh residents, with bicycle use lower than in many other European cities such as Amsterdam or Paris. Like most cities cycling is seen as a clean, environmentally friendly method of transportation, which needs little space, the provision of few, inexpensive facilities as well as a means of attempting to cut down on traffic congestion.

Many improvements in facilities for cyclists in Edinburgh can be attributed to Spokes, the Lothian Cycle Campaign, formed in 1977. Attempts to make Edinburgh more "cycle friendly" have been made, particularly by Spokes. Some cyclists remain unconvinced that the promise of a "Model Cycle-Friendly City" has been achieved.

The Edinburgh Remakery is a social enterprise that teaches repair. The shop sells refurbished computers and furniture, and hosts workshops where people can come along and learn how to repair their own things. There's a big vision behind it: "we want to generate a repair revolution. This means changing the way people use and dispose of resources, encouraging manufacturers to build things to last and to be fixable, and making sure the facilities are in place to allow people to repair and reuse."

From Wikipedia:Transport in Edinburgh § Pedestrians

Given that Edinburgh is a small, relatively walkable city, travelling by foot is a common means of transport for the majority of citizens who live, work or visit the city. Like most urban zones, pedestrian density is at its highest in the commercial core of the city, where the majority of shops, businesses and offices are located, with pedestrian density tailing off rapidly through the inner city to the suburbs. In Edinburgh, pedestrian density is at its highest around Princes Street, George Street, Rose Street, the Royal Mile, the North and South Bridges as well as George IV Bridge. These are the areas where the majority of city centre shops are located, as well as bars, restaurants, pubs and tourist attractions such as the Scott Monument, Edinburgh Castle and the Holyrood Palace.

Unlike Glasgow, most of the city centre is not pedestrianised, with the exception of Rose Street (parallel to Princes Street), which is pedestrianised along its length. A section of the Royal Mile - one of the main tourist streets in Edinburgh - from the junction of George IV Bridge (Melbourne Place) to the junction with North Bridge, is pedestrianised through the use of automatic bollards which only give access to authorised vehicles. This is an area with pavement cafes and bars with tables outside.

Edinburgh Trams is a tramway in Edinburgh, Scotland, operated by Edinburgh Trams Ltd. As of 2022 it is a 14-kilometre (8.7 mi) line between York Place in the New Town and Edinburgh Airport, with 15 stops.

After running for two years, the scheme had achieved pre-tax profitability (excluding maintenance and infrastructure costs) and exceeded the original ridership targets. It has run at an operating loss since 2018 (e.g. -£9.4 million in 2018). On 14 March 2019, Edinburgh Council voted to approve the extension of the existing line from York Place to Newhaven. The extended line is due to be operational by early 2023.

From Wikipedia:Transport in Edinburgh § Waterways

The Union Canal was opened in 1822 and provides an inland waterway link from Edinburgh to Falkirk and from there to Glasgow via the Forth and Clyde Canal. It is currently owned by the public corporation Scottish Canals and chiefly used for leisure purposes.

Jun 17 - 18 The Power of Food Festival, weekend Festival celebrating community gardens in Edinburgh. Its purpose is to encourage greater societal wellbeing, environmental sustainability and social inclusion through the promotion of community food growing.

Community-owned solar panels to be installed in 25 Council buildings throughout Edinburgh. May 25 [6]