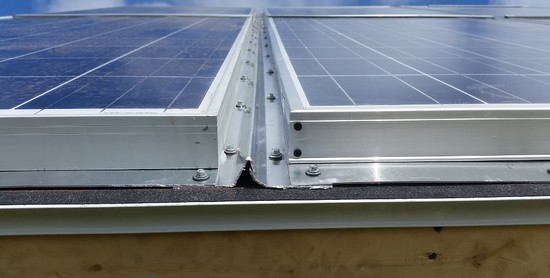 Abstract
Building-integrated photovoltaic (BIPV) systems have improved aesthetics but generally cost far more than conventional PV systems because of small manufacturing scale. Thus, in the short and medium term, there is a need for a BIPV mounting system that utilizes conventional modules. Such a design is provided here with a novel modification of conventional photovoltaic (PV) modules to allow them to act as BIPV roofing slates. The open-source designs for the mechanical components necessary to provide the post-consumer conversion for a conventional PV module are provided, and prototypes are fabricated and installed on a mock roof system along with control modules mounted conventionally. The approximately U.S.$22/module BIPV roof-mounted system is direct mounted on the roof to eliminate the need for roofing shingles or other coverings, which effectively provides a 20% total cost reduction from conventional racking systems that demand a roof to mount upon without considering the savings from the rack itself. The results of the outdoor system testing found no water leaks. An increased operating temperature was observed, which would reduce the output from a silicon-based PV module by less than 10%. The results found significant potential for this design to further reduce total PV systems costs.