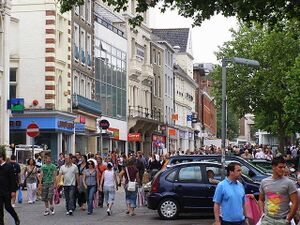 Norwich ( (listen)) is a cathedral city and district of Norfolk, England, of which it is the county town. Norwich is by the River Wensum, about 100 miles (160 km) north-east of London, 40 miles (64 km) north of Ipswich and 65 miles (105 km) east of Peterborough. As the seat of the See of Norwich, with one of the country's largest medieval cathedrals, it is the largest settlement and has the largest urban area in East Anglia.

In August 2007 Norwich was listed as one of nine finalists in its population group for the International Awards for Liveable Communities. The city eventually won a silver award in the small-city category. W

As of 2015, the city has 23 parks, 95 open spaces and 59 natural areas managed by the local authority. In addition, there are several privately owned gardens which are occasionally opened to the public in aid of charity. W

The Plantation Garden is a restored Victorian town garden located off Earlham Road, Norwich, Norfolk. As of 2021, visitors are asked to pay £2 to visit the garden, which is open daily throughout the year.

Sustrans plans to build a bridge between the Riverside area and Whitlingham County Park as part of the Connect2 project from the National Lottery. The country park is currently disconnected from the main residential areas by the River Yare and River Wensum. W

From Wikipedia:Norwich park and ride

Norwich Park and Ride is a park & ride bus service in the English city of Norwich, East Anglia. The first of the park and rides was opened in the early 1990s at Norwich Airport in Hellesdon, while the sixth (and currently final) site was opened in Thickthorn in 2005. With the addition of the final site, the Norwich Park & Ride became the largest park and ride services in the United Kingdom, and provided the scheme with over 5,000 permanent car parks – at the time the highest number for a park and ride scheme in the country. The scheme was awarded the British Parking Association Park and Ride award in 2004, and in the 2006/2007 financial year, 3.3 million people used the service, keeping 940,000 cars out of the city centre.

Proposals in the Norwich Transport Strategy include limiting traffic on some roads, introducing five rapid bus links into the city, and creating a 'train-tram' link to the Rackheath ecotown. W

Waterways: The River Yare is navigable from the sea at Great Yarmouth all the way to Trowse, south of the city. From there the River Wensum is navigable into Norwich up to New Mills, and is crossed by the Novi Sad Friendship Bridge. Scheduled trips through the city and out to the nearby The Broads are run by City Boats from outside Norwich Station and also Elm Hill. In June 2012, Norwich City Council gave the go-ahead to introduce punting on the River Wensum. W

Page data
Retrieved from "https://www.appropedia.org/w/index.php?title=Norwich_community_action&oldid=657087"
Cookies help us deliver our services. By using our services, you agree to our use of cookies.
Categories:
About Appropedia · Policies · Contact · Content is available under CC-BY-SA-4.0 unless otherwise noted.