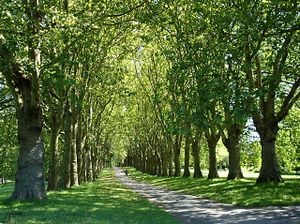 Avenue of trees in St George's Park. St George's Park was originally outside the city boundary of Bristol, and under the control of St George Urban District Council. This avenue of London Plane trees date from 1902. July 2007. Attribution: Linda Bailey
Location data
From Wikipedia:South West England

South West England is one of nine official regions of England. It consists of the counties of Bristol, Cornwall (including the Isles of Scilly), Dorset, Devon, Gloucestershire, Somerset and Wiltshire. Cities and large towns in the region include Bath, Bristol, Bournemouth, Cheltenham, Exeter, Gloucester, Plymouth and Swindon. It is geographically the largest of the nine regions of England covering 9,200 square miles (23,800 km2), but the third-least populous, with approximately five million residents.

The region includes the West Country and much of the ancient kingdom of Wessex. It includes two entire national parks, Dartmoor and Exmoor (a small part of the New Forest is also within the region); and four World Heritage Sites: Stonehenge, the Cornwall and West Devon Mining Landscape, the Jurassic Coast and the City of Bath. The northern part of Gloucestershire, near Chipping Campden, is as close to the Scottish border as it is to the tip of Cornwall. The region has by far the longest coastline of any English region.

From Wikipedia:Forest of Avon Trust

The Forest of Avon Trust is the local charity for trees and woodlands in the former county of Avon, which now comprises Bristol, North Somerset, South Gloucestershire, and Bath & North East Somerset.

The Trust's ethos is to deliver the benefits of trees and woodlands to as many people as possible in the Avon area to benefit people and wildlife. It runs wellbeing activities for people with learning disabilities, mental health needs or dementia; it works with schools to plant trees and engage children in the natural world; it supports community groups and young people to improve their local environment; and it works with land owners to care for woodlands and plant new ones. The charity also champions the Forest of Avon Community Forest, working with partners to safeguard existing trees and plant new woodland as part of this.

Regen SW, not for profit company working to enable business, local authorities community groups and other organizations to deliver renewable energy and energy efficiency and build a prosperous low-carbon economy in the south west of England.

FareShare South West, on facebook, charity working with the food industry, to distribute good quality food, that would have been wasted, to projects involved with vulnerable people across the region [1] - Surplus Supper Club

As measured by the English Indices of Deprivation 2007, the region shows similarities with Southern England in having more Lower Layer Super Output Areas in the 20% least multiple deprived districts than the 20% most deprived. The relative amount of deprivation is similar to the East Midlands, except the South West has many fewer deprived areas. According to the LSOA data in 2007, the most deprived districts (before Cornwall became a unitary authority) were, in descending order: Bristol (64th in England), Torbay (71st), Plymouth (77th), Kerrier (86th), Restormel (89th), North Cornwall (96th), and West Somerset (106th). At county level, the deprived areas are City of Bristol (49th in England), Torbay (55th), Plymouth (58th), and Cornwall and the Isles of Scilly (69th).

In March 2011, the region had the second-lowest unemployment claimant count in England, second to South East England, with 2.7%. Inside the region, Torbay has the highest rate with 4.5%, followed by Bristol and Plymouth with 3.8%. East Dorset has the lowest rate with 1.4%.

From Wikipedia:Kennet and Avon Canal

The Kennet and Avon Canal is a waterway in southern England with an overall length of 87 miles (140 km), made up of two lengths of navigable river linked by a canal. The name is used to refer to the entire length of the navigation rather than solely to the central canal section. From Bristol to Bath the waterway follows the natural course of the River Avon before the canal links it to the River Kennet at Newbury, and from there to Reading on the River Thames. In all, the waterway incorporates 105 locks.

The two river stretches were made navigable in the early 18th century, and the 57-mile (92 km) canal section was constructed between 1794 and 1810. In the late 19th and early 20th centuries, the canal gradually fell into disuse after the opening of the Great Western Railway. In the latter half of the 20th century the canal was restored in stages, largely by volunteers. After decades of dereliction and much restoration work, it was fully reopened in 1990. The Kennet and Avon Canal has been developed as a popular heritage tourism destination for boating, canoeing, fishing, walking and cycling, and is also important for wildlife conservation.