From Appropedia
Redirected from Dorset 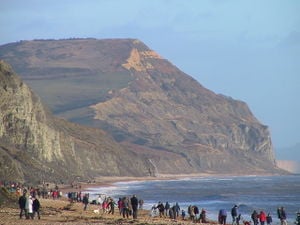 Dorset (; archaically: Dorsetshire) is a county in South West England on the English Channel coast. The ceremonial county comprises the unitary authority areas of Bournemouth, Christchurch and Poole and Dorset. Covering an area of 2,653 square kilometres (1,024 sq mi), Dorset borders Devon to the west, Somerset to the north-west, Wiltshire to the north-east, and Hampshire to the east. The county town is Dorchester which is in the south. After the reorganisation of local government in 1974, the county's border was extended eastward to incorporate the Hampshire towns of Bournemouth and Christchurch. Around half of the population lives in the South East Dorset conurbation, while the rest of the county is largely rural with a low population density.

Over half the county is designated as an Area of Outstanding Natural Beauty.

Can you help with NuFEAST?: send us your top tips for eating sustainably research.bournemouth.ac.uk

Support growing for National Park bid (which could bring £90m funding to Dorset), May 18 [1]

Bournemouth is a step closer to becoming world leader in green economy, Oct 6 [3]

Bournemouth's first ever Street Kitchen to help town's homeless, May 14 [6]