From Appropedia
Redirected from Gloucestershire 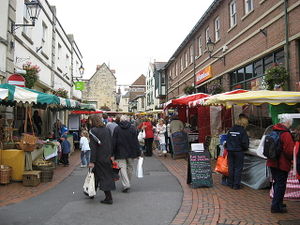 Gloucestershire ( (listen) (listen) abbreviated Glos) is a county in South West England. The county comprises part of the Cotswold Hills, part of the flat fertile valley of the River Severn, and the entire Forest of Dean.

The county town is the city of Gloucester, and other principal towns include Cheltenham, Stroud, Tewkesbury, Cirencester, Dursley, Cinderford, and Lydney.

The current Gloucestershire County Council area does not have the same geographical boundaries as the historic county. Some northern parts of the county, including Long Marston and Welford-on-Avon, were transferred to Warwickshire in 1931. Following the Local Government Act 1972, some southern parts of the county were transferred to the new county of Avon, which ceased to exist on 1 April 1996. After 1996, the city of Bristol and South Gloucestershire became separate unitary authorities.

Friends of the Wilderness Centre, Forest of Dean

Stroud, a market town in Gloucestershire was one of the birthplaces of the Organic food movement and was home to Britain's first fully organic café, Woodruffs. The Biodynamic Agricultural Association is based in the town. [1]

Stroud has a strong community of independent shops and cafés, which provide the mainstay of the retail experience in the town. [2] GLOSS FM is local radio for Thornbury and District, offering free local infomertials on-air for local not-for profit community initiatives

Thornbury Give n Take on mythornbury.co.uk

Cotswold Canals Trust, (Wikipedia): registered charity that aims to protect and restore the Stroudwater Navigation and the Thames and Severn Canal.

Have your say on how developments in Stroud should promote sustainable construction, Nov 10 [3]