Gundruk is particularly popular in Nepal. The annual production of gundruk in Nepal is estimated at 2,000 tons and most of the production is carried out at the household level. Gundruk is obtained from the fermentation of leafy vegetables in Nepal. It is served as a side dish with the main meal and is also used as an appetiser. Gundruk is an important source of minerals particularly during the off-season when the diet consists of mostly starchy tubers and maize which tend to be low in minerals 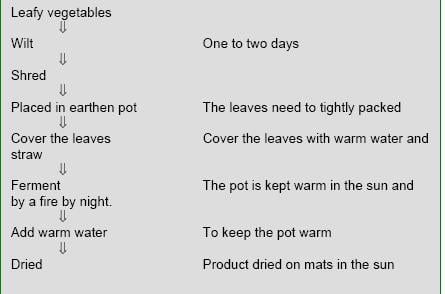 In the months of October and November, during the harvest of the first broad mustard, radish and cauliflower leaves, large quantities of leaves accumulate - much more than can be consumed fresh. These leaves are allowed to wilt for one or two days and then shredded with a knife or sickle.

The shredded leaves are tightly packed in an earthenware pot and warm water (at about 30oC) is added to cover all the leaves. The pot is then kept in a warm place. After five to seven days, a mild acidic taste indicates the end of fermentation and the gundruk is removed and sun-dried. This process is similar to sauerkraut production except that no salt is added to the shredded leaves before the start of gundruk fermentation. The ambient temperature at the time of fermentation is about 18oC.

Pediococcus species and Lactobacillus species are the predominant micro-organisms during gundruk fermentation. During fermentation, the pH drops slowly to a final value of 4.0 and the amount of acid (as lactic) increases to about 1% on the sixth day. It has been found that a disadvantage with the traditional process of gundruk fermentation is the loss of 90% of the carotenoids, probably during sun-drying. Improved methods of drying might reduce the vitamin loss

Page data
Retrieved from "https://www.appropedia.org/w/index.php?title=Gundruk_(Practical_Action_Brief)&oldid=596246"
Cookies help us deliver our services. By using our services, you agree to our use of cookies.
Categories:
Maintenance categories:
Comments
Privacy policy · About Appropedia · Disclaimers · Mobile view · Content is available under CC-BY-SA-4.0 unless otherwise noted.
</html