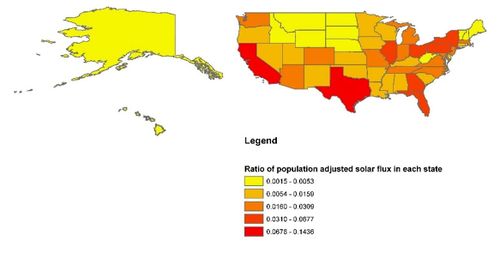 
Although wealth inequality has many established negatives, this study investigates a potential positive, unprecedented wealth concentration makes it possible for solutions to large and seemingly intractable problems to be deployed by convincing a relatively small number of individuals to invest. In order to probe this potential outcome of inequality, this study quantifies the number of people necessary to radically reduce the greenhouse gas emissions responsible for global climate destabilization from the U.S. electric grid, which is one of the largest sources of emissions. Specifically, this study determined that 1544 GW of solar photovoltaic (PV) technology must be deployed to eliminate the use of fossil fuels on the U.S. electric grid, if PV is conservatively deployed as a function of population density. The results showed that only 79 American multi-billionaires would need to invest in PV. This investment would still leave each investor with a billion dollars of liquid assets as well as substantial long-term profits from PV. The analysis also concluded that 79 people is a conservative upper estimate of those that would need to be convinced of the usefulness of moving to a solar U.S. grid and that this estimate is likely to decrease further in the future.