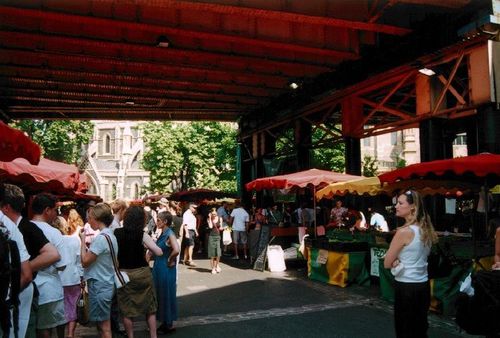 We have created A People’s Food Policy because the current food system does not reflect our vision.

Our vision is rooted in the desire for change shared by so many people in this country. A vision where farmers are able to work the land and produce nutritious food that everybody has access to and is able to eat. A vision where we are at the heart of decision-making that affects our lives and our food system.

And yet we are experiencing a deeply unjust struggle in our food system every day, characterised by inequality and exploitation at all levels.

We currently have a food system where:

There is no place at the table for civil society and agricultural workers to participate in policy-making and develop democratic food governance.

An estimated over eight million people across England, Wales and Northern Ireland experience food insecurity and struggle to eat even one meal a day. /1

64% of farmers earn less than £10,000 a year, /2 eight supermarkets control almost 95% of the food retail market, /3 and farmers receive less than 10% of the value of their produce sold in supermarkets. /4

Working in the food and farming sector is characterised by insecure, precarious and unpredictable labour conditions.

There is hardly any support available for new entrant farmers or funding for farmers producing food on less than five hectares (twelve acres) of land, /5 and over 33,000 small to medium farms have been closed down or consolidated into larger holdings between 2005 and 2015. /6

We have one of the highest levels of concentrated land ownership in the world, /7 industrial agriculture continues to produce a tenth of all greenhouse gases (GHG) in England, and food production is reliant on unsustainable inputs of fossil fuels and chemicals that threaten our ability to produce in the future. /8

And this is just the tip of the iceberg.

Despite this, there is a growing grassroots movement working to change the situation. The voice of the corporate food industry has held a virtual monopoly in how food policy is shaped. It is clear that the worldview they hold is incompatible with a food policy that puts people and the planet at its centre. Together, all of us with a stake in the food system – anyone who grows, prepares, distributes or eats food - have the answers. Many of the solutions we need are already being sown through our everyday actions, but to make our vision a reality we also need the support of policy makers and government.

We do not currently have a national food and farming plan, policy or legislative framework [1] that integrates the compartmentalised policy realms of food production, health, labour rights, land use and planning, trade, the environment, democratic participation and community wellbeing. This lack of integration is having long-term and negative impacts on each of these sectors.

To see real and significant shifts in the way our food system operates, we need to drastically change the way that food governance takes place. A People’s’ Food Policy aims to map out what an integrated food policy would look like if people were put at the heart of decision-making. A growing group of people from different civil society organizations, unions and community groups working across the food system have come together to develop the ideas and positions in this document.

The Brexit vote can be interpreted in part as people wanting to reclaim a voice in decision-making from distant policy makers. The government must not perpetuate the same dynamic. Policy makers now need to incorporate the views and needs of civil society and grassroots organizations into domestic policy, rather than focussing on the interests of the corporate food industry and international free trade agreements.

Brexit represents an opportunity to create a food policy that is visionary, progressive and guarantees that everyone in this country is able to realise, without restriction, our right to food. Over the coming years, all of our economic and agricultural policies that were previously subject to European Union (EU) law will need to be revisited and rewritten. This is an enormous task and there are calls now from all corners of our food system to develop food policies and governance structures that are coherent, complementary and protect our food system and food cultures.

This document focuses on England, rather than the United Kingdom (UK) as a whole, because Scotland, /9 Wales /10 and Northern Ireland, through their powers of devolved governance, have already taken steps towards shifting how their food systems function and are governed. In Scotland for example, due in part to the highly-organised work of civil society, the devolved governments are beginning to develop policies and practices that shift the food system from a market-based approach to a rights-based approach to food. [2] There is much to learn from each other, and our hope is that the proposals in this document will cross pollinate with similar ideas and actions currently gaining pace across the UK. [3]