South East England is one of the nine official regions of England at the first level of NUTS for statistical purposes. It consists of the counties of Buckinghamshire, East Sussex, Hampshire, the Isle of Wight, Kent, Oxfordshire, Berkshire, Surrey and West Sussex. Major towns and cities in the regions include Brighton and Hove, Guildford, Portsmouth, Milton Keynes, Reading, Oxford, Slough and Southampton.

South East England is the third largest region of England, with an area of 19,096 km2 (7,373 sq mi), and is also the most populous with a total population of over eight and a half million (2011). The region contains seven legally chartered cities: Brighton and Hove, Canterbury, Chichester, Oxford, Portsmouth, Southampton and Winchester. The region's close proximity to London and connections to several national motorways have led to South East England becoming a prosperous economic hub with the largest economy of any region in the UK, after London. The region is home to Gatwick Airport, the UK's second-busiest airport, and Heathrow Airport (the UK's busiest airport) is located adjacent to the region's boundary with Greater London. The coastline along the English Channel provides numerous ferry crossings to mainland Europe.

The region is known for its countryside, which includes the North Downs and the Chiltern Hills as well as two national parks: the New Forest and the South Downs. The River Thames flows through the region and its basin is known as the Thames Valley. It is also the location of a number of internationally known places of interest, such as HMS Victory in Portsmouth, Cliveden in Buckinghamshire, Thorpe Park and RHS Wisley in Surrey, Blenheim Palace in Oxfordshire, Windsor Castle in Berkshire, Leeds Castle, the White Cliffs of Dover and Canterbury Cathedral in Kent, Brighton Palace Pier, and Hammerwood Park in East Sussex, and Wakehurst Place in West Sussex. The region has many universities; the University of Oxford is the oldest in the English-speaking world, and ranked among the best in the world.

South East England is host to various sporting events, including the annual Henley Royal Regatta, Royal Ascot and The Derby, and sporting venues include Wentworth Golf Club and Brands Hatch. Some of the events of the 2012 Summer Olympics were held in the south east, including the rowing at Eton Dorney and part of the cycling road race in the Surrey Hills. 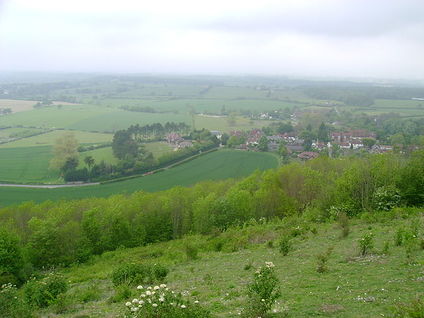 A view from the South Downs of the village of Poynings. May 2007 Attribution: User:Paste

Please see our Local communities in South East England pages, where of course you can share any more information you may have about local sustainability initiatives.

In July 2019, Surrey County Council declared climate emergency. Two months later, they gave the go-ahead to plans for four more oil wells at Horse Hill, near Gatwick. To highlight the dangers of more oil drilling in a time of climate emergency, there will be a demonstration in October. [4] Sep 16

‘Filled to bursting with trees, woods and nature reserves’: greening the Green Belt by Friends of the Earth Innovation team. [5] Jun 12

If we value rural Britain, we can’t build houses all over it, Simon Jenkins, Aug 6 [7]

Households in southern England urged to save water after dry winter, May 5 [8]

May 25 The South of England Food and Drinks Festival