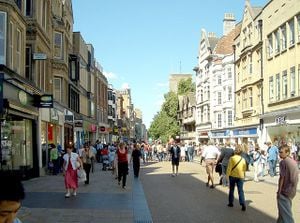 The county has major education and tourist industries and is noted for concentrations of performance motorsport, car manufacturing and technology companies. The University of Oxford is widely considered one of the leading universities in the world and is linked to a concentration of local technology and science activities at locations such as the Harwell Science and Innovation Campus, while Oxford University Press is the largest among a concentration of print and publishing firms.

As well as the city of Oxford, other centres of population are Banbury, Bicester, Kidlington and Chipping Norton to the north of Oxford; Carterton and Witney to the west; Thame and Chinnor to the east; and Abingdon-on-Thames, Wantage, Didcot, Wallingford and Henley-on-Thames to the south. All its zones south of the Thames: the Vale of White Horse and parts of South Oxfordshire were within the historic county of Berkshire, including the highest point, the 261-metre (856 ft) White Horse Hill.

Oxfordshire contains a green belt area that fully envelops the city of Oxford and extends for some miles to protect surrounding towns and villages from inappropriate development and urban growth. Its border in the east extends to the Buckinghamshire county boundary, while part of its southern border is shared with the North Wessex Downs AONB. It was first drawn up in the 1950s, and all of the county's districts contain some portion of the belt.

OYAP Trust, formerly the Oxfordshire Youth Arts Partnership, is a UK-based charity involved in the education of young people through participation in the arts. The trust aims to develop skills, confidence and self-esteem and give vulnerable young people access to mainstream education, arts and training opportunities. OYAP Trust works with young people to create a brighter future for communities. W

National Cycle Routes in or around Oxfordshire include Route 5 W, running from Reading to Holyhead, via Oxford; and Route 51 W, running broadly east-west connecting Colchester and the port of Harwich to Oxford.

Too Good To Waste Oxfordshire

The Sonning Common Health Walks was set up in 1996 by Dr William Bird, who is a general practitioner in Reading, Berkshire, England. The walks aim to reduce heart disease, reduce cholesterol and blood pressure, relieve depression and anxiety, reduce stress, help with weight management / obesity, and help with diabetes. Each walk is led by a Leader who is a trained volunteer. The leaders know the route. You walk at your own pace but you are advised to stretch yourself to raise your heart rate and get you breathing faster.

Bird set up health walks from his practice in Sonning Common, Oxfordshire, and then worked with the Countryside Agency and the British Heart Foundation to expand it nationally.

see also: Towards a more democratic and climate friendly way of meeting housing need across England

The Oxford Green Belt Way is a long-distance path in Oxfordshire, England. It follows a circular route of 50 miles (80 km) through the Oxford Green Belt surrounding the city of Oxford. The route was devised in 2007 to mark the Campaign to Protect Rural England 75th anniversary and to highlight the importance of the Green Belt. On its launch each mile on the route marks one year since the designation of the greenbelts in 1956.

From Wikipedia:Oxfordshire § Rivers and canals

From the mid-point western edge to the southeast corner of Oxfordshire, via the city in the middle, runs the Thames with its flat floodplains. This river forms the historic limit with Berkshire, remaining so on some lowest reaches. The Thames Path National Trail follows the river from upper estuary to a source.

Many smaller rivers in the county feed into the Thames, such as the Thame, Windrush, Evenlode and Cherwell. Some of these have trails running along their valleys. The Oxford Canal links to the Midlands and follows the Cherwell from Banbury via Kidlington into the city of Oxford, where these join the navigable Thames. About 15% of the historically named Wilts & Berks Canal, in sporadic sections, has been restored to navigability, including the county-relevant 140 metres near Abingdon-on-Thames where it could, if restored, meet the Thames.

The Oxford Canal is a 78-mile (126 km) narrowboat canal in central England linking the City of Oxford with the Coventry Canal at Hawkesbury (just north of Coventry and south of Bedworth) via Banbury and Rugby. Completed in 1790, it connects to the River Thames at Oxford, and links with the Grand Union Canal, which it is combined with for 5 miles (8 km) between to the villages of Braunston and Napton-on-the-Hill.

The canal is usually divided into the North Oxford Canal (north of Napton, via Rugby to Hawkesbury Junction near Coventry) and the South Oxford Canal, south of Napton to Banbury and Oxford.

The canal was for about 15 years the main canal artery of trade between the Midlands and London, via its connection to the Thames, until the Grand Union Canal (then called the Grand Junction Canal) took most of the London-bound traffic following its opening in 1805. The North Oxford Canal (which had been straightened in the 1830s) remained an important artery of trade carrying coal and other commodities until the 1960s; the more rural South Oxford Canal however became something of a backwater, especially following the opening of the Grand Junction Canal, and it faced closure proposals in the 1950s. Since the end of regular commercial goods carriage on the canal in the 1960s, it has gained a new use as a leisure resource, and become used primarily for narrowboat pleasure boating.

The Oxford Canal traverses Oxfordshire, Northamptonshire and east Warwickshire through broad, shallow valleys and lightly rolling hills; the canal's route northeast and then northwest forms part of the Warwickshire ring.

The Trust is the successor to the Wilts & Berks Canal Amenity Group (formed in 1977) and a founder member of the Wiltshire, Swindon & Oxfordshire Canal Partnership, which embraces the Trust, the local authorities for the areas through which the route of the canal passes, statutory bodies, and other interested parties. The Trust's headquarters are at Dauntsey Lock, adjacent to the canal between Chippenham and Royal Wootton Bassett.

To protect, conserve and improve the route of the Wilts & Berks Canal, North Wilts Canal, and branches, for the benefit of the community and environment, with the ultimate goal of restoring a continuous navigable waterway linking the Kennet and Avon Canal near Melksham, the River Thames near Abingdon, and the Thames and Severn Canal near Cricklade.

Earth Trust hosts a full programme of events each year, including countryside management courses, taster workshops and family festivals. They are best known for their Lambing Weekends in spring, which were attended by over 8,000 people in 2016.[6]

Earth Trust relies on the support of volunteers who carry out a range of tasks, including habitat management on their nature reserves, administration in the office, and support during education sessions and events. In 2016 the hard work of the Earth Trust Volunteers was recognised when they received The Queen's Award for Voluntary Service – the MBE for volunteer groups. W / Earth Trust Centre W, Earth Trust

This disastrous new project will change the face of Britain, yet no debate is allowed, George Monbiot, Aug 22[2]

Page data
Retrieved from "https://www.appropedia.org/w/index.php?title=Oxfordshire_community_action&oldid=641737"
Cookies help us deliver our services. By using our services, you agree to our use of cookies.
Categories:
About Appropedia · Policies · Contact · Content is available under CC-BY-SA-4.0 unless otherwise noted.