The rocket stove is a variety of wood-burning cooking stove with a higher efficiency than other types of traditional ovens due to a better insulation and a better combustion process. They function under a similar principle as rocket stove mass heaters. Most rocket stoves are easy to build, and can be made with low-cost materials. 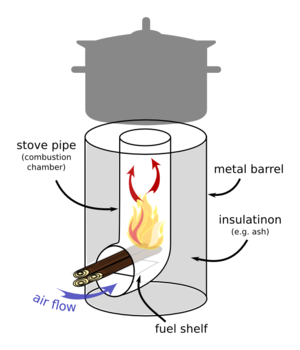 A rocket stove addresses air quality problems arising from the use of an open pit fire for cooking and home heating. Biomass fuels release large amounts of air pollutants when burned on traditional open pit fire, and these pollutants become concentrated in inadequately ventilated homes and dwellings, generating respiratory problems to families, especially in rural areas.

Another concern with traditional wood fires is the environmental cost due to inefficiency of fuel consumption. Traditional open pit wood fires are very efficient at turning wood into energy, but inefficient at transferring the released energy into the cooking vessel. Most of the released energy in the wood is wasted heating the surrounding air rather than heating the cooking vessel. The inefficient transfer of energy requires the use of more wood, which has to be harvested from the surrounding environment, causing environmental stress.

The third drawback of traditional wood fires is the danger to children. Because open fires are located on the floor of the dwelling, children can easily fall into the fire.

The rocket stove operates roughly twice as efficiently, and substantially more cleanly, than the open fire cooking methods still used in many areas of the world. Furthermore, the design of the stove requires small diameter lengths of wood, which can generally be satisfied with small branches. As such, sufficient fuel for cooking tasks can be gathered in less time, without the benefit of tools, and ideally without the destruction of forested areas.

Because these qualities improve local air quality, and discourage deforestation, the rocket stove has attracted the attention of a number of appropriate technology concerns, which have deployed it in numerous third-world locales (notably, the Rwandan refugee camps). This attention has resulted in a number of adaptations intended to improve convenience and safety, and thus the size of the target audience. The Justa Stove, for example, is a cousin of the rocket stove adapted for indoor use and family cooking needs. 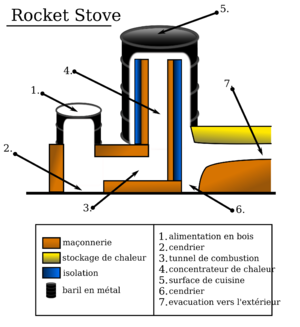 A rocket stove is a simple mechanism mostly made of the following elements:

Some of the principles for building a rocket stove are:[1]

Metering the fuel The most important factor, metering the fuel, requires only the burning portion of the wood to be heated. Fully burned biomass fuel produces less smoke and emissions. The main way to improve the fuel efficiency of rocket stoves is to improve the heat transfer from the fire to the cooking vessel.

Most importantly, the hot air and gas released from the fire must contact the cooking vessel over the largest possible surface area. This is accomplished through the use of a pot skirt that creates a narrow channel forcing hot air and gas to flow along the bottom and sides of the cooking vessel. Heat transfer can also be increased by using wide pots. Increasing the speed of the hot gases that flow around the pot can also improve heat transfer.

The following list contains all pages with projects or devices that have been documented with instance-of=Rocket stove.

Wood, charcoal, coal and other biomass are used by about 2.4 billion people worldwide as their primary cooking fuel. In ‘developing’ countries, these fuels are often burned in open fires or poorly functioning stoves[2]. Several factors from these cooking processes have been shown to be damaging to human health, especially attributing to respiratory related illness. Indoor smoke given off by these fuels contains constituents including small soot or dust particles that are able to penetrate deep into the lungs. Every year, indoor air pollution is responsible for the death of 1.6 million people -one death every 20 seconds [3].

Women and children being the ones most involved or exposed to this environment are worst affected. Charcoal production has been associated with environmental issues such as deforestation which further increases other environmental and social vulnerabilities. The trees that grow most slowly; hardwood trees make the highest quality charcoal, furthering the impact. Wood or wood charcoal is the primary cooking fuel in Haiti, and this dependence has contributed to only 2% of Haiti’s forests remaining. In places like Haiti, the limited availability of wood means that finding gathering fuel consumes time and energy, causes more severe weather, increases vulnerability, reducing capacity, costs money and further stresses an already depleted resource. In some places such as in Mali, due to changes in the energy and economic sectors a pronounced shift from fuel wood to charcoal is happening which is raising concerns for the local resources.

The main justifications for rocket stoves are economical, social, and environmental. Stove programs can produce economic benefits, saving time and money for the users. In urban areas where people purchase biomass fuel, the payback time for the cost of a rocket stove is short, thus saving on the cost of fuel.

Rocket stoves can help reduce the over-harvesting of trees. Improved indoor air quality and fuel efficiency have social and health benefits, especially for women and children. In order to reduce indoor air pollution, rocket stoves must improve combustion of the wood fuel, which means reducing the amount of smoke and harmful emissions produced during the burning process. The key to efficient combustion is to burn wood at a high temperature, and there are several ways to achieve this:

Rocket stoves are insulated and lifted off of the floor. This reduces the danger of children burning themselves, which is an important improvement over traditional open pit fires.