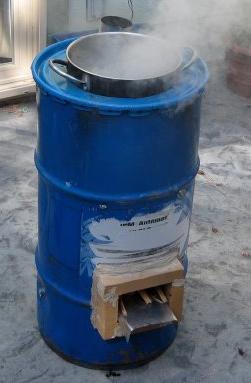 The M2-B2 Rocket Stove promotes sustainability through demonstration and education while on the WaterPod in New York City. The stove is designed to provide a reliable and sustainable means of cooking by minimizing fuel use and optimizing efficiency.

The WaterPod had five artists living on a barge in New York for five months trying to get all their energy, water, and food from the barge itself. The WaterPod traveled by river promoting sustainability and climate change awareness, The barge stopped in all five boroughs of New York encouraging the public to tour the barge and join in classes, events, and workshops. The WaterPod worked with the Engineering 215 - Intro to Design class at Humboldt State University to create sustainable projects. Team Mel Brooks was assigned the task of creating an efficient means of cooking that can be utilized for the duration of the project. Team Mel Brooks created a rocket stove, which optimizes biomass as a fuel source to cook for The WaterPod.

Team Mel Brooks objective in this project was to build an efficient cooking stove, using minimal materials that will optimize biomass to create a stove which can boil water. During the design process of this stove, we came up with a set of criteria to assist us in our design process. The following are some of the criteria that we came up with as a group. The WaterPod also assigned us a set of criteria which we incorporated into our own criteria for the project.

The final rocket stove design was chosen because it is durable, and required minimal materials. Since The WaterPod is an art project we wanted the aesthetics of the project to look nice. At first we decided upon a rocket stove that actually looks like a rocket so that it fit in with the art theme of the barge. Considering the fact that we are not artists we decided to continue with simplicity in mind. In the end we ended up with a rocket stove that is functioning and also pleasing to the eye.

There were many parts involved in this project in which Team Mel Brooks either had to find, purchase or create. The main structure of the rocket stove is a 16 gallon oil drum, which we found at a local scrap yard. The oil drum houses all of the components needed for the rocket stove. Located inside the drum is a combustion chamber, vermiculite, a pot skirt, and the actual cooking pot.

There are a few next steps that can be taken with this rocket stove project. For one, it would probably be best to extend the chimney of the stove, so that the exhaust does not come right out into the user's face. Simple extensions to the chimney can be added to the already existent elbow, so that the user does not inhale any smoke. One item that is eventually going to need to be replaced will be the fuel shelf. We used aluminum sheet metal for the fuel shelf that we built, but after extended use it may begin to bend which could cause the fuel shelf not to work.