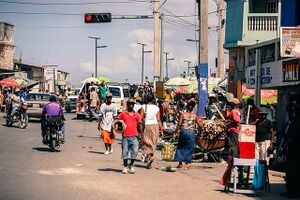 Haiti, is a Caribbean country. It occupies the western, smaller portion of the island of Hispaniola, in the Greater Antillean archipelago, which it shares with the Dominican Republic. It is the poorest country in the Americas as measured by the Human Development Index. In 2004 and 2008 Haiti was badly affected by tropical storms. The grim state of affairs produced by these storms was all the more life threatening due to already high food and fuel prices that had caused a food crisis and political unrest in April 2008. On 12 January 2010, at 4:53pm local time, Haiti was struck by a magnitude-7.0 earthquake. This was the country's most severe earthquake in over 200 years. The country has yet to recover from the 2010 earthquake. W

Safe and Sustainable Water for Haiti

“Give Me Light, Give Me Life”: How Renewables Are Rekindling Hope in Haiti (Part 3), November 4 [1]

In 1925, Haiti was lush, with 60% of its original forest covering the lands and mountainous regions. Since then, the population has cut down all but an estimated 2% of its original forest cover, and in the process has destroyed fertile farmland soils, contributing to desertification. Erosion has been severe in the mountainous areas. Most Haitian logging is done to produce charcoal, the country's chief source of fuel. The plight of Haiti's forests has attracted international attention, and has led to numerous reforestation efforts, but these have met with little success to date.

In the 19th century, arable land in the size of 15 hectares was distributed to farmers. It was inherited and divided by their children. In 1971, the average farm size was less than 1.5 hectares. To survive, the landowners had to overuse the land. It became infertile within a few years. The farmers moved to clear steeper hillsides and finally become unemployed. Eventually the shortage of arable land and rising rural poverty pushed peasants from hillside subsistence farms to search for work in Port-au-Prince, where the concentration of desperate people in slums contributed to the country's tragic history of civil strife.

Despite the large environmental crises, Haiti retains a very high amount of biodiversity in proportion to its small size. W