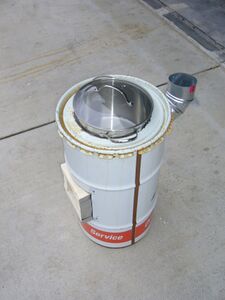 This Improved Fuel Stove, or Rocket Stove, is the final project for Engr305 at Humboldt State University. The project goal is to construct a demonstration rocket stove for the Campus Center for Appropriate Technology on the campus of Humboldt State University. The rocket stove will serve as an example of improved fuel stove technology and development; students and public touring the center will learn about the design, function and need for improved fuel stoves around the world.

The rocket stove will also enable the residents of the center to cook with traditional biomass, reducing their dependence on petroleum based energy sources. It is important to note that rocket stoves are designed for populations around the world who depend on biomass for their cooking fuel. The use of rocket stoves in developed nations is not necessary. Developed nations using modern cooking methods are not faced with health and environmental issues related with traditional cooking methods. The improved fuel stove was designed, built and tested by Daniel Moyer and Tyler Jones.

The materials used in the construction of a rocket stoves main body are made from recycled metal barrels. An old lemon oil can was trimmed to the proper dimensions, becoming our pot skirt. The insulated combustion chamber is comprised of ceramic insulated bricks purchased at a local pottery supply store. The chamber is held together with eighteen gauge stainless steel metal plating fastened with 3/8 inch hardware. The hardware used to construct the rocket stove includes machine screws, nuts, washers and sheet metal screws; all of our hardware utilized was purchased from a local hardware store. 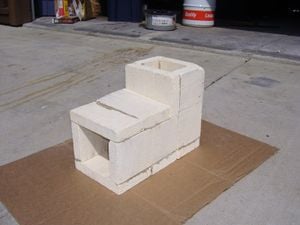 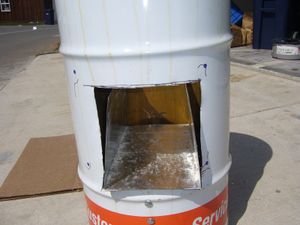 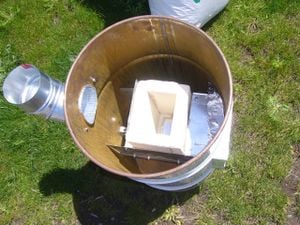 Fig 1.2: Combustion chamber inside the barrel 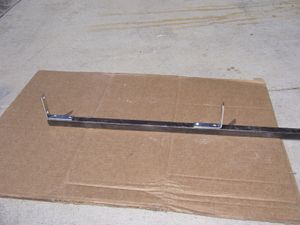 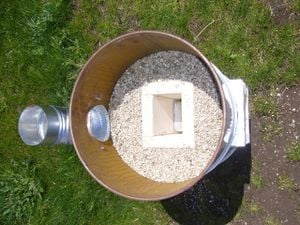 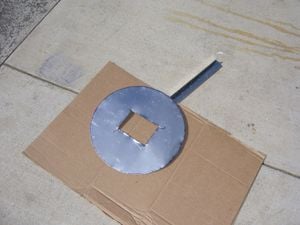 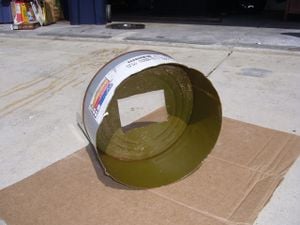 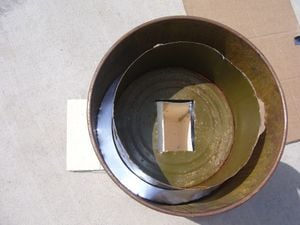 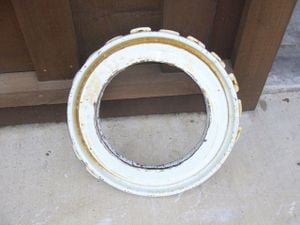 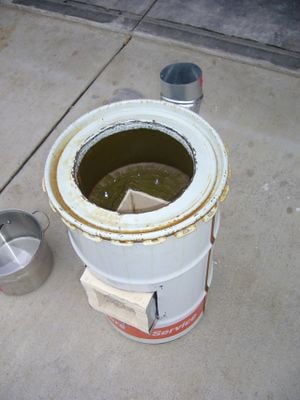 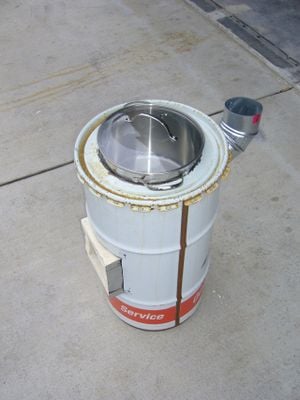 Testing is essential to rocket stove projects. Testing should happen throughout the entire life of a stove project. The evaluation of improved stoves helps determine if the model is marketable, whether production costs are as low as possible, and if improvements are needed. "Careful testing of stoves has resulted in a more accurate understanding of how to make a better stove. Without experimentation and testing, the development of a stove is based on conjecture". Technical advances in energy efficiency alone will not ensure success. Stove programs must be complemented by appropriate project design, implementation and proper institutional support. Without proper testing, stove programs will have unrealistic expectation of the efficiency of improved stoves. Stove programs can overestimate the efficiency of improved stoves when tested in a controlled lab setting. Improved stoves never do as well in real households. "The fuel savings that can be attained in a laboratory often have little relationship to savings possible under field conditions" [1]. Many stove programs in controlled lab settings achieved a 75% reduction in fuel consumption. After examination of early stove programs, fuel efficiency expectations of improved stoves have been substantially reduced. "Most people in the stove community now agree that a 50% decrease in fuel consumption should be considered a major achievement and that should be content with a savings of 25% or even less" [1]. Laboratory settings can be valuable with designing and initial testing of improved stoves; testing in field conditions can ensure the final product is built and designed correctly. Producing a stove design that adheres and conforms to local culture is vital in ensuring a successful stove program.

In testing our stove, we wanted to find out how long it would take to boil water and how much wood was being used. We also inspected the ashes to determine if the wood was fully combusted. Ultimately we did three types of tests.

The results of our testing demonstrated that the project was a success. The first thing that we noticed was that the air circulation is excellent. We never had a problem getting enough air into the fire or with having smoke back out of the combustion chamber. This makes starting a fire very easy. Also, we were happy to see that there were hardly any ashes left over. The wood burned hot and combusted completely. Although the top of the stove gets hot when the fire is burning fast, the vermiculite does a very good job of insulating the bottom part. The lower half of the stove never got too hot to touch and the very base never even got warm. Once a fire is going, it must be tended regularly. As well as adding new wood as the fire burns, it is important to constantly push burning pieces all the way into the chamber. Our stove is very efficient. To cook spaghetti in our stove would require roughly one pound of wood and would take only a few minutes longer than a regular stove. By using a lot of wood and creating a big flame, it is possible to boil water quickly. With less wood, the same amount of water can be boiled but it takes longer. It takes a lot of wood to heat water initially, but to keep it boiling requires very little wood. One pound of wood would keep six liters of water boiling for about two and a half hours. When our stove is burning, the pot and the skirt get a lot of soot. Periodically, it will be necessary to clean this soot out.

In building a rocket stove, we learned some important things. First, it would be possible to construct this type of stove using only recycled materials. The hardware would be the most difficult to find. It would also be possible to construct our rocket stove with out the use of power tools. We could have used a hammer and spike instead of a drill. We also could have used a hacksaw instead of a Sawzall. We only used this tool once, to cut the skirt out. As we anticipated, the top of the stove got hot. If our stove was placed inside of another barrel and insulated, it would be more user-friendly. Personally, I would rather deal with the hot surface than to put more work into the stove. In a situation where there were children using the stove, the hot metal could be dangerous. The one thing that our stove lacks is a shelf for extra long pieces of wood to rest on while they are combusting.

Populations around the world are going to continue to use biomass fuel for the indefinite future. The use of improved stoves can help control the external costs to both the environment and human society. "It seems inevitable that an increasing amount of biomass fuel will be bought and burned in purchased stoves" [1]. Fuel savings may not be the driving factor in the adaptation of improved stoves. Improved stoves work because they make cooking quicker, safer, and cleaner. Improved stoves protect children from the dangers of burns from the open fire, reduce respiratory diseases, and burn clean and free of soot.

On September 11, we visited the rocket stove at CCAT to check on how it's doing and update the page a little. The stove is in decent condition but there are a few areas that the stove could be improved. The rocket stove has gone through a few very minor changes since its creation. Recently, it received a fresh paint job. Also, the chimney has been lengthened considerably. As you can see from previous pictures, the original chimney was rather short. The new chimney is much taller and has a cap on the top. We also left a laminated informational piece to hang around the chimney and let people know what the rocket stove is and information about rocket stoves in general.

We met up with Dan and tested the stove. It appeared as if the stove hadn’t been used in quite a few years.

We observed a few problem areas. The vermiculite used to insulate the combustion chamber is old and could be replaced. Also, there are small gaps between the combustion chamber and the metal case of the barrel, which may have decreased the concentration of the heat around the pot and the low temperature of the boiling water. These gaps could easily be filled in by some kind of heat resistant sealant. Also, it was unclear if the addition of the longer chimney improved the flow of gasses or not. As noted earlier the chimney should be short, reaching just above the cookpot so the lengthened chimney might have actually hindered the flow of gases. Also, the bricks in the combustion chamber may need some replacing as well. If this stove was being consistently used, it would probably be a good idea to address these concerns as you would want your stove in prime running condition.

Updated by Jacob Carroll-Johnson and Carlos A. Sanchez

It looked like the rocket stove has not been used in quite some time. Reasons for not using the rocket stove is easy of use. Its difficult to light and once it is lit it's hard to stay lit. The bottoms of pots get scorched. It also becomes very smokey when using. The weather has taken its toll on it. I was bummed out that we couldn’t test it out and see actual results. We are planning on going back to do some testing and see how it compares with when it was first built.We will post results once we run some tests.

We proceed with the analytical analysis. The first thing that we noticed was the smoke flute and the laminated information were gone. Rust has taken its toll on the stove.The top and bottom have taken the most hit from it. There are some holes from the rust going all the way through the top. So the top will soon need to be replaced. The bottom also has been affected. It appears that the rust has eaten the metal, and is now really thin at the bottom. No holes yet but maybe in the near future. There doesn't seem to be much continuity of the rocket. Moving on to the combustion chamber. The heat resistant sealant that was used to seal the ceramic bricks is almost completely gone. The bottom brick is also in bad shape. When we wiggled the bottom brick we saw that only one big chunk moved. We also noticed that the back part of the combustion chamber had cracks.