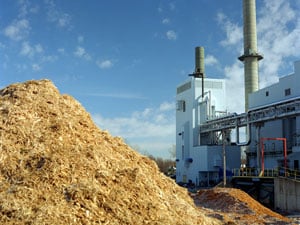 Biomass is all the organic matter produced from living or dead animals, fungi, and plants. All plants (which too feed animals and fungi) are sustained through photosynthesis, so the source of almost all energy in biomass is thus the sun, with the biomass acting as a kind of chemical energy store. Biomass is constantly undergoing a complex series of physical and chemical transformations and being regenerated while giving off energy in the form of heat to the atmosphere. Biomass also acts as one of the primary links in the carbon cycle: e.g. trees are mammoth storehouses of carbon and when they are burned or otherwise die and rot, they release carbon dioxide or methane into the atmosphere.

The exploitation of energy from biomass has played a key role in the evolution of mankind. Until relatively recently, it was the only form of energy which was usefully exploited by humans and is still the main source of energy for more than half the world's population for domestic energy needs. Biomass for heating is by far the oldest renewable energy source.

Three main types of biomass can be distinguished:

Under these main types, solid, liquid or gaseous biomass that are used as fuel can be further subdivided in First-generation and Second-generation types. (see also: "Utililising the biomass efficiently")

Biomass is available in varying quantities throughout the developing world: from densely forested areas in the temperate and tropical regions of the world, to sparsely vegetated arid regions where collecting wood fuel for household needs is a time consuming and arduous task.

In recent decades, with the threat of global deforestation, much focus has been given to the efficient use of solid biomass and the promoting of biofuels (for stationary use and use in vehicles) in areas where woodfuel is in particular shortage. Although domestic fuelwood users suffer greatly from the effects of deforestation, the main cause of deforestation is clearing of land for agricultural use and for commercial timber or fuel-wood use.

Many programmes have been established during the last 3 decades aimed at developing and disseminating improved stove technologies to reduce the burden, primarily borne by women, of fuelwood collection. An additional advantage is the reducing of health risks associated with burning fuelwood. Technologies have also been introduced to help with the processing of biomass, either to improve efficiency or to allow for easy transportation.

As mentioned earlier, natural biomass resources vary in type and content, depending on geographical location. For convenience sake, we can split the world's biomass producing areas into three distinct geographical regions:

Many poor families in rural and urban areas collect dung as their source of income. There is a group of women in Bangladesh, who traditionally collect dung, make cakes and sell them to commercial markets. The traditional collectors of dung are teenage girls from poor families. They bring back dung to their homes and convert it into round cakes and cone-like sticks for drying in the open air.

Several types of densification can be applied, depending on the source material. For example:

Biogas and biohydrogen can be compressed in tanks. Also, methane can be extracted from biogas, which is even more combustible.

Besides the use of food to nourish humans, animals, crop and industrial biomass residues are also useful as they allow the production of process heat for electricity production or other commercial end uses. They are now widely used in many countries to provide centralised, medium and large-scale energy production. There are several examples in Indonesia of timber processing plants using wood waste-fired boilers to provide heat and electricity for their own needs, and occasionally for sale to other consumers.

For economic reasons, the processing of the biomass is first done according to a specific pattern in order to get the most out of the biomass.[1] This then yields several products which can be further utilised. This pattern, as well as the quantities, ... depend on the types of biomass used. In addition, within some types of biomass (such as living or dead plants), some crops can only be used for one or a few applications (including some oil crops as Jatropha, Pongamia, ... can only be used as storable fuel and immediatelly consumable fuel, oil crops as rapeseed can only be used as food and storable fuel). The whole of finding the most suitable pattern is known as biorefining. A general list shows the products with high added value and lowest volume of biomass to the products with the lowest added value and highest volume of biomass:[2]

For using the biomass to fulfill in our own energy needs, there are several options. The most basic (and energy-inefficient option) is the open fire. The open fire fulfills in several needs: it provides light, heat, the option to cook something, scare wild animals, repel insects, smoke food. Although open fires and other outdoor cooking techniques still axist, more energy-efficient cooking technologies now exist.

Local biomass use in the developing world[edit | edit source]

More than two million people in the developing world use biomass for the majority of their household energy needs. It is used mainly for cooking, heating water and domestic space heating. Table 1 below shows household energy consumption as a percentage of total biomass consumption in a number of selected countries in Africa. Biomass is also used widely for non-domestic applications.

Biomass can be used for a variety of commercial activities. There are several technologies which employ direct combustion of unprocessed or semi-processed biomass to produce process heat for a variety of end-uses. The most common is the simple furnace and boiler system which raises steam for such applications such as tobacco curing, electricity generation and beer brewing. Biomass is also used for providing direct heat for brick burning, for lime burning and cement kilns. The advantage of using biomass is that it can be locally sourced, thereby avoiding shortages associated with poor fuel supply networks and fluctuating costs.

For solid biomass to be converted into useful heat energy it has to undergo combustion. Although there are many different combustion technologies available, the principle of biomass combustion is essentially the same for each. There are three main stages to the combustion process:

Drying – all biomass contains moisture, and this moisture has to be driven off before combustion proper can take place. The heat for drying is supplied by radiation from flames and from the stored heat in the body of the stove or furnace.

Pyrolysis - the dry biomass is heated and when the temperature reaches between 200°C and 350°C the volatile gases are released. These gases mix with oxygen and burn producing a yellow flame. This process is self-sustaining as the heat from the burning gases is used to dry the fresh fuel and release further volatile gases. Oxygen has to be provided to sustain this part of the combustion process. When all the volatiles have been burnt off, charcoal remains.

Oxidation – at about 800°C the charcoal oxidises or burns. Again oxygen is required, both at the fire bed for the oxidation of the carbon and, secondly, above the fire bed where it mixes with carbon monoxide to form carbon dioxide which is given off to the atmosphere.

It is worth bearing in mind that all the above stages can be occurring within a fire at the same time, although at low temperatures the first stage only will be underway and later, when all the volatiles have been burned off and no fresh fuel added, only the final stage will be taking place. Combustion efficiency varies depending on many factors; fuel, moisture content and calorific value of fuel, etc. The design of the stove or combustion system also affects overall thermal efficiency and table 2 below gives an indication of the efficiencies of some typical systems (including non-biomass systems for comparison).

Concern for the environment was one of the major inspirations for early research and development work on improved stoves. One of the greatest paradoxes of this work is that, the more that is learnt about people, fuel and cooking, the more it is realised how little was understood about the environment and the implications concerning domestic energy use.

Large-scale combustion of biomass is only environmentally feasible if carried out on a sustainable basis. For obvious reasons continual large-scale exploitation of biomass resources without care for its replacement and regeneration will cause environmental damage and also jeopodize the fuel source itself.

The effects of inhaling biomass smoke during cooking are receiving attention from researchers; chronic bronchitis, heart disease, acute respiratory diseases and eye infections have been linked with smoky interiors, but the impacts of fuel shortage on cooking and nutrition are scarcely noticed.