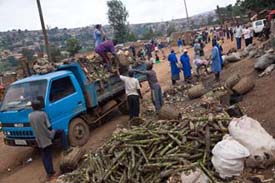 Garbage is sorted in which materials high in cellulose are used for briquette making. Photo courtesy of greenlivingproject.com

Many waste products, such as wood residues and sawdust from the timber industry, municipal waste, bagasse from sugar cane processing, or charcoal dust are briquetted to increase compactness and transportability. Briquetting is often a large scale commercial activity and often the raw material will be carbonised during the process to produce a usable gas and also a more user friendly briquette. Some improved stoves have been designed specifically to be used with briquettes (Karekezi 1997). Clean dung briquettes finally can be made from manure.

Use in Rwanda[edit | edit source]

In the capital of Rwanda, Kigali, one man's trash is most definitely another man's environmentally friendly fuel. The United Nations Developing Program is supervising a community driven project that is held together by Franciose Kayigamba. She is the national coordinator of GEF (Global Environmental Facility) which is making this community project possible. This undertaking takes city rubbish and turns it into sustainable burning materials, also known as briquettes.

How briquettes are made[edit | edit source]

Rwanda has the highest population density in Africa and further population growth is putting more stress on the environment. Anything to aid the country in sustainability is a step in the right direction. In the capital of Rwanda, Kigali, wood and charcoal are the leading fuels for cooking and heating and in rural Rwanda, wood is the primary source of fuel. Wood is commonly a primary source of fuel in most developing countries. The prevalence of this wood-fueled cooking and heating is causing major environmental problems in Rwanda, such as deforestation and pollution.

A women's cooperative, ACEN/COOCEN, is responsible for the project that turns trash into the ecological briquettes. This will reduce CO2 emissions and deforestation. Household waste is collected from 12,000 Rwandan families and brought to a facility in Kigali. From there, materials high in cellulose such as tree fibers, cardboard, paper, compost and wood scraps are collected, dried and compacted. They are then turned into briquettes which can serve the same purpose as wood but are cleaner to burn and more efficient to use. Fourteen tons of briquettes are made each day. They are sold to schools, prisons, factories, etc. and are not commonly used in households. 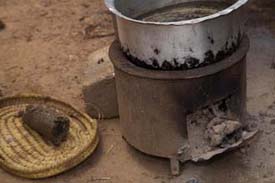 Briquettes are a cheaper and more environmentally friendly alternative to wood and charcoal. Photo courtesy of greenlivingproject.com

The impact of production of these briquettes are improving sustainability in Rwanda. First, it reduces overall garbage, methane emissions and encourages waste management. The briquettes are cheaper than wood and/or charcoal. The cooperative has given jobs over 100 people, 90% of them being women.