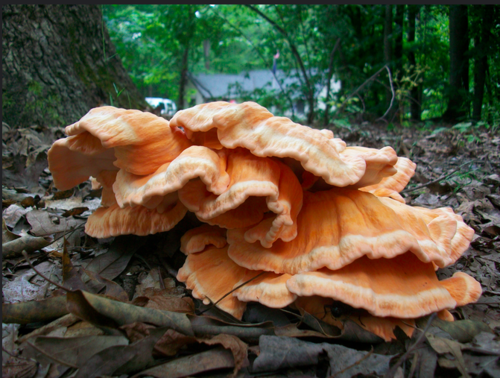 Fungi refers to organisms that form a separate kingdoms from plants, animals, protists and bacteria.[1] Older texts may refer to fungi as plants, just remember to mentally update that reference to the separate kingdom if reading older books.

Fungi includes both unicellular (such as yeasts and molds) and multicellular organisms (such as the fruiting bodies of mushrooms and toadstools).[1] They grow like plants and are sessile (i.e. they do not move) but they lack the roots and leaves of plants and they don't produce seeds.

Unlike plants, which use photosynthesis to convert sunlight into food, fungi gain nutrients through breaking down plant and animal material. This action helps to turn organic matter into humus, an important part of soil structure.

Some fungi are parasites, and consume live plant material. Other fungi consume dead matter and are known as saprophytes. They are responsible for the vast majority of biological decomposition, playing a key part in the process of converting and transporting minerals and nutrients into the soil, back to plants and animals, and vice versa. Some fungi are beneficial for plants, assisting with the absorption of nutrients via the plant's root system. The fruiting bodies of fungus provide food for a wide range of animals from insects and rodents to human beings.

Most fungi live unseen by the human eye. There are over 100,000 species of fungi on Earth.