From Appropedia
Redirected from Methane 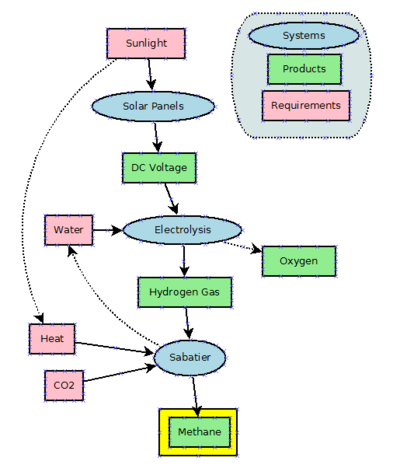 This is one example of how methane fuel can be produced sustainably. More info can be found from Wikipedia:Electrolysis and Wikipedia:SabatierReaction

Methane, CH4, is the lightest (least dense) and simplest hydrocarbon. It is the major constituent of natural gas, and a potent greenhouse gas.

Many biological processes produce it as it is a a byproduct of fermentation and composting. This method of production is called methanogenesis. Methanogenesis generally combines water with CO² to form methane. [1][2][3] This is done in a device known as a Methane reactor[4]

Besides using a MEC, another biological process can be used to produce methane. This process uses a biodigester. Basically, biogas, which contains methane, can be used: the methane is simply separated out of the biogas-mixture. Besides biogas, the same technique can be used with natural gas (both gases basically containing the same gases). This method hence does not use electricity at all, but in some cases this may also be a disadvantage is it then doesn't allow to store the electricity ie generated using PV-panels.

It can also be produced chemically. The first artificially production method uses electricity and is called the Sabatier process. This process basically combines CO² and hydrogen (H²). See http://en.wikipedia.org/wiki/Sabatier_process

A second chemical production method is called coal gasification. Coal can be converted into syngas and methane (also known as town gas). The methane can then be separated out of the town gas. This production method however is -as clear- not environmentally friendly at all.

Methane has fewer storage problems than hydrogen. It ie does not leak through materials as easily as hydrogen, meaning that regular tanks can be used.

Methane can be converted to syngas. This is done using a process called steam reforming. Basically, at high temperatures (700–1100 °C), steam (H2O) reacts with the methane (CH4) and yields syngas. As syngas is a gas that is much less easy to store, the uses of this process are limited.

If allowed to escape it has a negative impact on the climate. This, as it's a very potent GHG-gas. It breaks down when burned, so not a problem if burned; yet it can be a problem ie in case of leaks. Although it is a potent greenhouse gas, it does not last as long in the atmosphere as many other such gases, eventually breaking down into carbon dioxide and water vapor.

Page data
Retrieved from "https://www.appropedia.org/w/index.php?title=Methane_as_fuel&oldid=625353"
Cookies help us deliver our services. By using our services, you agree to our use of cookies.
Category:
About Appropedia · Policies · Contact · Content is available under CC-BY-SA-4.0 unless otherwise noted.