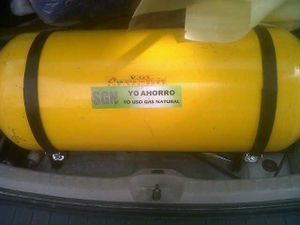 Natural gas is a gas composed of methane, with other hydrocarbons, carbon dioxide, nitrogen and hydrogen sulfide. The gas occurs naturally in underground cavities in many locations on Earth. It is often found at locations where petroleum too is present.

Before it can be used as a fuel, it must undergo processing to clean the gas and remove impurities including water in order to meet the specifications of marketable natural gas. The by-products of processing include ethane, propane, butanes, pentanes, and higher molecular weight hydrocarbons, hydrogen sulphide (which may be converted into pure sulfur), carbon dioxide, water vapor, and sometimes helium and nitrogen. It is this huge diversity in products that can be made from natural gas that has made it quite popular.

The use of natural gas has been steadily increasing in result of new technologies in the fracking industry. These new fracking technologies have drastically decreased the price by increasing the amount of reserves and decreasing the amount of labor and capital associated with fracking for natural gas. Since, there has been a decrease in the price of natural gas, it has been replacing coal power plants in the United States and has also increased the amount profitable oil fields that can now be fracked. One of the biggest draw backs of natural gas are the dangers that are associated with it. These dangers range from carbon emissions further progressing climate change, the negative health effects associated with the water quality that is a result of nearby fracking to accidental gas explosions. 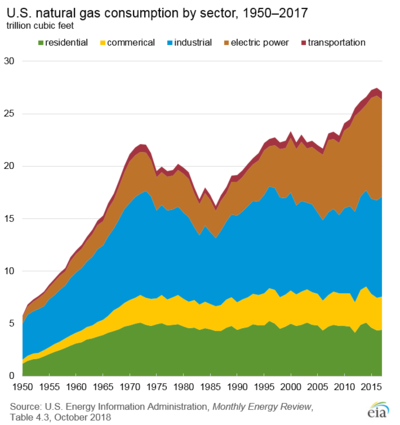 Transporting natural gas from the wellhead to consumers requires many infrastructure assets and processing steps, and it includes several physical transfers of custody. Natural gas delivery can be broken down into processing, transportation and storage. A natural gas processing plant typically receives natural gas from a gathering system of pipelines from natural gas and oil wells. The processing plants have a wide array of containments they remove that include oil, water, HGL, and other impurities such as sulfur, helium, nitrogen, hydrogen sulfide, and carbon dioxide. The composition of the wellhead natural gas determines the number of stages and the processes required to produce pipeline-quality dry natural gas. These processes and stages may be integrated into one unit or operation and might be performed in a different order depending on the processing plant. Natural gas can also be stored for times of peak demand, which fluctuates daily and seasonally, while production and pipeline imports are relatively constant in the short term. Storage of natural gas during periods of low demand helps to ensure that sufficient supplies of natural gas are available during periods of high demand.[3]

The price that consumers pay for natural gas is primarily composed of three different types of costs. These costs are commodity costs, transmission cost and a distribution cost. A commodity cost is the price of the natural gas itself. The transmission and distribution costs originates from the price that utilities charge the consumers for storing and transporting the natural gas. Retail prices for natural gas varies greatly based on geography. Some factors that affect the retail price of natural gas that are geography based are how far away the natural gas is produced or stored from the burner, the amount of natural gas that can be moved from producing areas, storage facilities, and trading hubs to distribution hubs and lastly how competitive the local natural gas market it is.[5] A key aspect to the costs associated with natural gas that can't be overlooked is how much setting up a gas connection to a house costs. For new construction an all electric home will on average be about three to five thousand dollars cheaper than a gas and electric house.

Natural gas is often to thought to be a cleaner fuel than coal in regards to the carbon intensity of each fuel. When just comparing the tailpipe emissions this is the case. However, in order for natural gas power plants to have a lower carbon intensity than coal fired power plants the methane leakage rate has to be under 3.2%. The state of California has an average methane leakage rate that is estimated to be anywhere from 3-5%. California's natural gas infrastructure is one of the less leaky systems in the world. The natural gas infrastructure that connects the Middle East to Europe are estimated to be twice as leaky, which puts their leakage rates at 6-10%. Natural gas leaking is a big concern because natural gas is primarily composed of methane, which on a 100 year timescale is 34 times more potent than carbon dioxide and on a 20 year time scale has 86 times the global warming potential than carbon dioxide.[6]

Page data
Retrieved from "https://www.appropedia.org/w/index.php?title=Natural_gas&oldid=625428"
Cookies help us deliver our services. By using our services, you agree to our use of cookies.
Categories:
About Appropedia · Policies · Contact · Content is available under CC-BY-SA-4.0 unless otherwise noted.