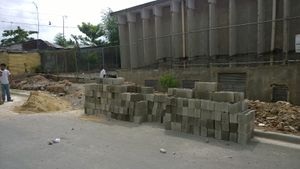 A mix of conventional and experimental blocks for use in the destacamento.
Menu
Practivistas Dominicana Program

The plan to make a building block that is cost effective and will be more environmentally sound while still having high tensile strength. This project is taking place from May 25th to July 5th and will take place in Las Malvinas a community in Santo Domingo. The group will be basing their blocks from rice husks and coconut husks so that the blocks can sustain the weather and pressure while still being environmentally sound.

The alternative block project location is in Las Malvinas, a community outside of the main section of Santo Domingo. Our team is made of two Humboldt State students and we are taking classes in UNIBE. The block project that the group is conducting is made so that the community in Las Malvinas can create a more inexpensive and sustainable block that will later be used by a local company to substitute regular commercial building blocks.

The objective of this project is to recreate a cinder block made from products other than solely concrete. This new block must also be more cost and environmentally effective while still being able to withstand the climate and natural disasters that occur in the Dominican Republic.

Below is a table of the criteria used to evaluate project components and make decisions.

See our Literature Review for relevant research completed for this project.

The budget tables will include 3 different types of table which are for the purpose of replicating the blocks, the overall cost of manufacturing the blocks, and the research cost.

"Considerations for Next Batch"