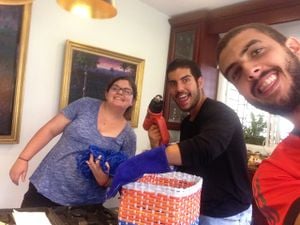 This page outlines the Arroyo Norte waste plastic innovation from start to finish over the six week project that is all part of the Practivistas Dominicana program located in Santo Domingo, Dominican Republic. The project's goal was to use plastic present at the Arroyo Norte dump to create sell-able products by using small pieces of HDPE plastic and creating plastic strips create products using a plastic extruder. The final products include roses, bracelets, a small woven bag, and a large woven beach bag.

The Arroyo Norte waste plastic innovation is a project created by the plastics team of the Practivistas Dominicana program. Practivistas is a summer program from Cal Poly Humboldt and is based in Santo Domingo, Dominican Republic. The program is six week course where the students work with underdeveloped communities in the Dominican Republic to help improve the quality of the lives of the community members through Appropriate Technology projects. The plastic innovation project is a collaboration between the Practivista program, Universidad Iberoamericana (UNIBE), and the community of Arroyo Norte. Arroyo Norte is a small community in Santo Domingo that is located next to Duquesa, the dumpsite for Santo Domingo. The excess of HDPE plastic located at the dump helped lead to the communities idea of the waste innovation project. The goal is to help reduce the amount of plastic in the dump and help boost the community's economy by collecting plastic, shredding it, making extruded plastic strips using a plastic extruder, making products using the strips, and selling them for profit to be put back into the project and the community economy. The plastic team is Rebecca Stark, Fernando Alberto, Luis Gonzalez, and Arroyo Norte community members.

The objective of this project is to work with the community of Arroyo Norte to design and create an upcycled, commercial products made from the HDPE plastic that are present at the Arroyo Norte dump to help boast the community economy and remove excess plastic from the dump.

The table of criteria was created by the plastics team, with input from the Arroyo Norte community, and is used to make decisions for the project. There are constraints that must be met for every decision but the weight next to the criteria shows its importance to the team on a scale of 1 to 10 with 10 being the most important. This criterium help the main goals of the project be considered for every project decision.

Step 2. Clean as many times as possible[edit | edit source]

The smaller the pieces (preferably<1mm) better for extrusion.

Overview of the Innovation with Plastics[edit | edit source]

Below is the completed project timeline, which outlines what was accomplished each day.

Made list of materials needed to both purchase and obtain from the community.

Made a project schedule and itinerary for the next meeting

Researched and learned to make a basic woven bag.

Searched for someone to customize extruder nozzles to create plastic ribbons. Had many failed attempts, new nozzles were needed.

Went to Arroyo Norte in the morning to pick up plastic however plans changed because of lack of shredded HDPE plastic at dump. Collected and cleaned HDPE plastic bottles. Found a local disposal site that shredded the cleaned bottles for free. Picked up supplies to repair the extruder. Cut some of the HDPE plastic into smaller pieces using scissors.

Finished repairing the extruder. Went to go work with the extruder at Arroyo Norte but had issues of electrical wiring, mechanic assembly or power intake. Washed more plastic bottles.

Group meeting to recollected, reorganize, refocus on our priorities given the project time frame.

Continued to make strips, Cut different sized holes out of extra nozzles to see which size of slit would create the best strips.

Bought color plastic pellets and began to extrude large amounts of colored strips. Experimented with using a water bath to cool down the plastic to get the desire thickness and consistency of the plastic strips.

Went to Arroyo Norte and a community member began to produce a small woven bag using a wooden mould. Continued to experiment with the water bath. Test were interesting but best method continued to be to let the strips fall to the floor from the extruder without any pulling, most consistent method.

Went to Arroyo Norte to produce strips but ended up having to leave early because of the electricity went out. Made more strips at Luis' house. Finished the small woven bag. Tried to make plastic roses using hot extruded plastic, not very successful.

Went to Arroyo Norte, presented the finish bag and continued making strips. Electricity went out at 2:30pm, which ended work in Arroyo Norte. Went to Luis' house and made a new mould for a bigger bag and produced a large amount of strips of varying colors. Worked on making basic bracelets to sell. Created by cutting extra strips to the correct length, heating the ends of the strips with a hot air blower and then clamping the two ends together using pliers.

Finished making strips for and building the Sunset beach bag. More bracelets and roses made.

Last visit to Arroyo Norte, showed finished prototypes and said goodbyes. Presented the project to a near bye teacher. Began to work on final presentation.

Continued to work on final presentation and the project Appropedia page.

Completed a simple presentation, and presented at Las Malvinas.

Finished final presentation and presented at UNIBE. Sold bracelets for 50RD each and made 800RD to be used for the project. End of project and program.

Table of all money spent on project. This is not recreation costs as some money was spent on research and development. 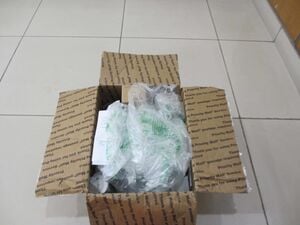 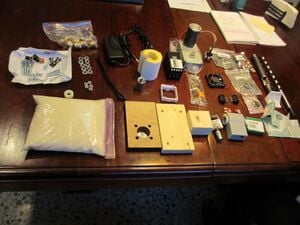 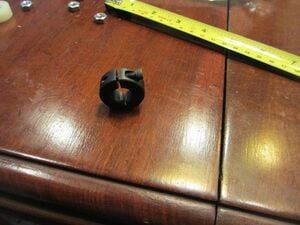 Filistuder kit
Find shaft collar (looks like a vary large washer about 2in wide) and take out its screw.
4 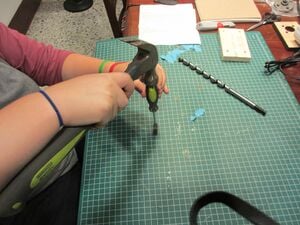 Filistuder kit
Find the feed screw. You will need to insert a flat head screw driver into the shaft collar and gently hit it with a hammer until it expands so you can slide it onto the screw so that the edge of the collar is 95mm from the flat end of the screw.
5 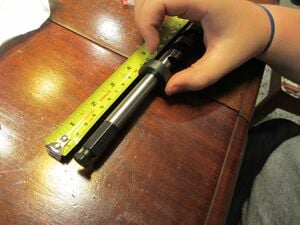 Filistuder kit
It should look like this. Once in the correct possession replace the screw and tighten but not to much because you may need to adjust it later.
6 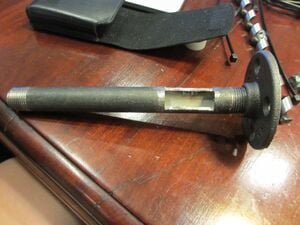 Filistuder kit
Now find the barrel and one of the nipples. Screw the barrel into the nipple gently and tighten with a wrench on the cut out section. Be careful not to deform the nipple.
7 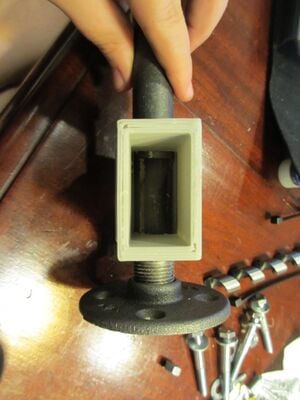 Filistuder kit
Slide the printed hopper onto the barrel so it matches up with the cut out. You may need to sand the hopper down a bit to be able to slide it on.
8 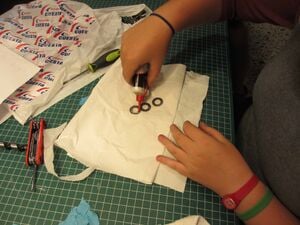 Filistuder kit
Find the two races and the cage(all located in individual great bags and one box). Lubricate with light oil or grease.
9 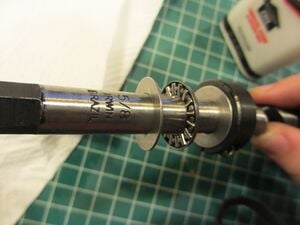 Filistuder kit
Put them in order of race, cage, and race and slide onto the end of the feed screw so they are closest to the flat end and up against the shaft collar.
10 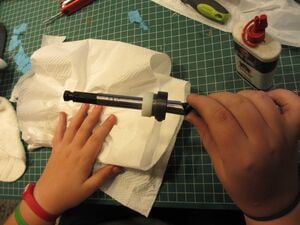 Filistuder kit
Add the nylon bushing( the white, large looking washer) on to the feed screw after the last race. It should look like this.
11 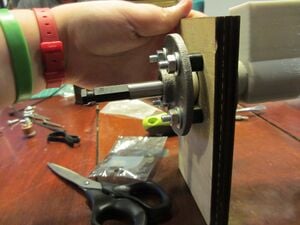 Filistuder kit
Put the feed screw into the barrel. Place the wood so that the end of the feed screw comes out of the hole. Take the four bolts add a washer to each and put them through the small holes in the nipple connected to the barrel and the small holes in the wood so that the washer is flush with the nipple and the extra is coming out of the wood holes. You may need to people for this step one person to hold the bolts in place and the other to add components. Now add a spacer to each bolt. Add the second nipple so that the flat side is facing the wood. Finish by adding a washer and nut to each bolt and tightening by hand. Check to see if about 1/4in of the feed screw sticks out of the barrel, if not you need to take it apart and adjust the location of the shaft collar.
13 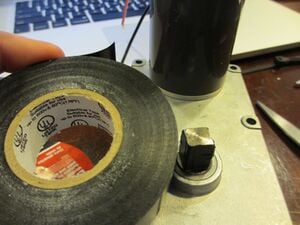 Filistuder kit
Find your motor and add some electrical tape around the motor shaft. About 2-3 wraps is good.
14 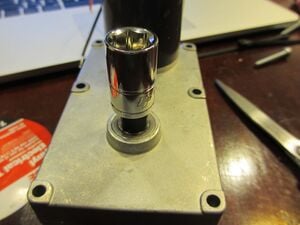 Filistuder kit
Find the hex socket and place it on the motor shaft so it is snug.
15 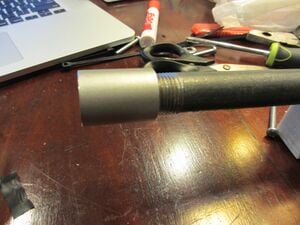 Filistuder kit
Find the coupling(looks like a small cylinder with threading on the inside) and thread it onto the end of the barrel.
16 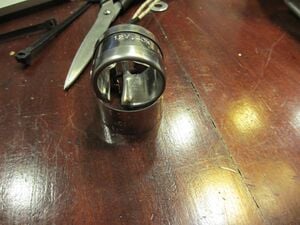 Filistuder kit
Find the heating band and take off the outside by taking out the screw.
17 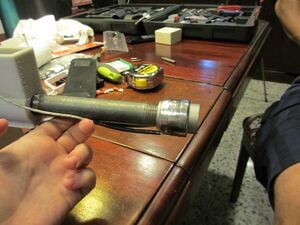 Filistuder kit
Slide the heating band onto the coupling still it is almost to the back of the coupling. Once it is in possession put the outside piece back on and tighten with the screw.
18 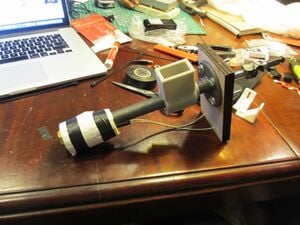 Filistuder kit
Place on the insulation very loosely because it will need to come off later.
19 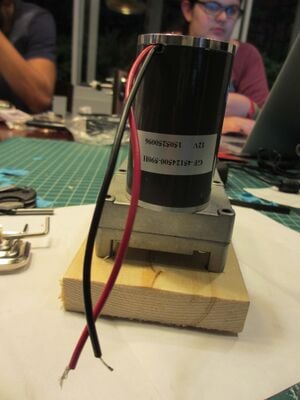 Filistuder kit
Use screws to connect the motor to the flat piece of wood with the four small holes.
20 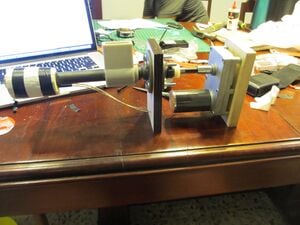 Filistuder kit
Put the flat end of the feed screw into the hex socket. It should look like this.
21 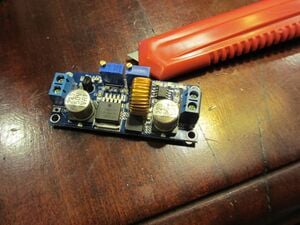 Filistuder kit
Find the stall protector board and get a very small flat head screw driver or a knife.
22 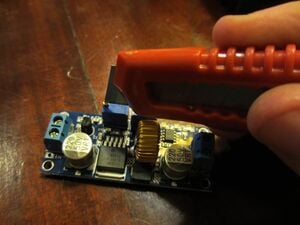 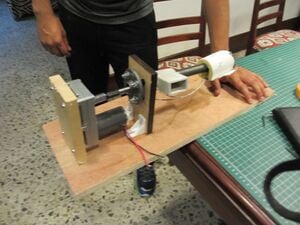 Filistuder kit
Attach the whole extruder to a board using the provided screws. Make sure to predrill the holes in the board and the wood. Leave about 6in of board in front of the barrel.
24 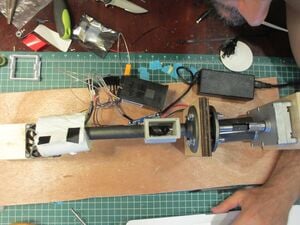 Filistuder kit
Attach the fan to the small piece of wood and then screw that the board as well right under the end of the barrel.
25 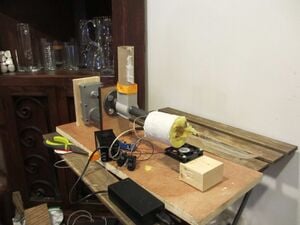 Filistuder kit
Follow the kit instructions for wiring. Your finished extruder should look like this. Enjoy your new extruder.

What we wished we did[edit | edit source]

For small issues with the extruder please look at the table below for the solutions. If your problem is not listed or the solution does not solve the problem please contact Luis Gonzalez at gonzgarcia.luis@gmail.com , Rebecca Stark at rds334@humboldt.edu , or Fernando Flores at faf34@humboldt.edu.

This work could be a followup to the previous year's project (2014) which became a peer reviewed journal article (in 2018):