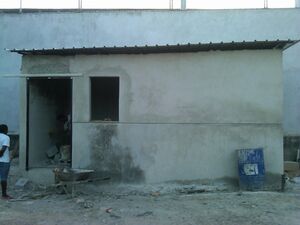 This project was part of the Summer 2013 Practivistas Dominicana project, led by Lonny Grafman in the Dominican Republic. Five students, three from Cal Poly Humboldt (HSU) in California and two from Universidad Iberoamericana (UNIBE) in Santo Domingo, collaborated with the community of Las Malvinas to construct three walls for a "Botica Popular" in the community. This experimented with cinder blocks, or concrete masonry units (CMUs) made of various upcycled materials such as sawdust, paper and rice hulls mixed with cement and pressed using an industrial cinder block maker. At the same time another team worked on building an internal wall out of ecoladrillo, or upcycled plastic bottles.

Las Malvinas is a rural barrio on the Northern outskirts of Santo Domingo, next to the La Isabela industrial zone. Las Malvinas and Practavistas began working together in 2012, when together they built a schoolhouse out of ecoladrillo and papercrete blocks. Through a series of public meetings Las Malvinas community members have identified and prioritized a list of needs. On that list are access to running water and medicine. To address the need for water a team of motivated community leaders constructed a large cistern (approx. 50 cubic meters). An engineer from UNIBE assisted in the design. To address the need for medicine the two student teams mentioned above worked with community members to construct a Botica Popular. The Botica Popular sits partially on top of the cistern and is approximately 6 meters long and 3 meters wide.

For boticas populares, the program fronts the medications and accepts payment at cost price upon distribution to the patient. Las Malvinas does not have a local clinic or hospital. The nearest hospital is Moscosos Puello about 5 km away.

The community of Las Malvinas is seeking to construct a Botica Popular, or government-funded pharmacy, in their community. The objective of this project was to build two of the four walls of the Botica using alternative masonry and to erect the complete Botica by 5 July 2013. This student team fabricated building blocks with sawdust, rice hulls or paper mixed with cement and pressed in an industrial block press. With the climate in the Dominican Republic, the blocks need to be able to withstand heat, rain and the test of time.

Part of the objective of this project was to find a building material, specifically a fiber-concrete mixture, that the community will be able to utilize in the future to make more blocks for other projects. As such, final product should be composed of locally purchased or acquired materials, and have a low cost, both monetary and environmental.

Entirely concrete cinderblocks have a high embedded energy, with an average of 0.67 MJ/kg and 0.073 kg Co2 per kg with a density of 1450 kg/m3[2]. The new blocks should have less embedded energy per block.

This section was designed to assist in the determination of the different aspects of this project. The group chose these criteria based on the expectations of the client, the class and personal interest. Weighing the criteria allows for focus on certain elements of the project to ensure satisfaction with the final product.

With the help of Julio, a student and fellow Practavista, we were able to strength-test samples of the blocks with UNIBE facilities. The results can be accessed here: 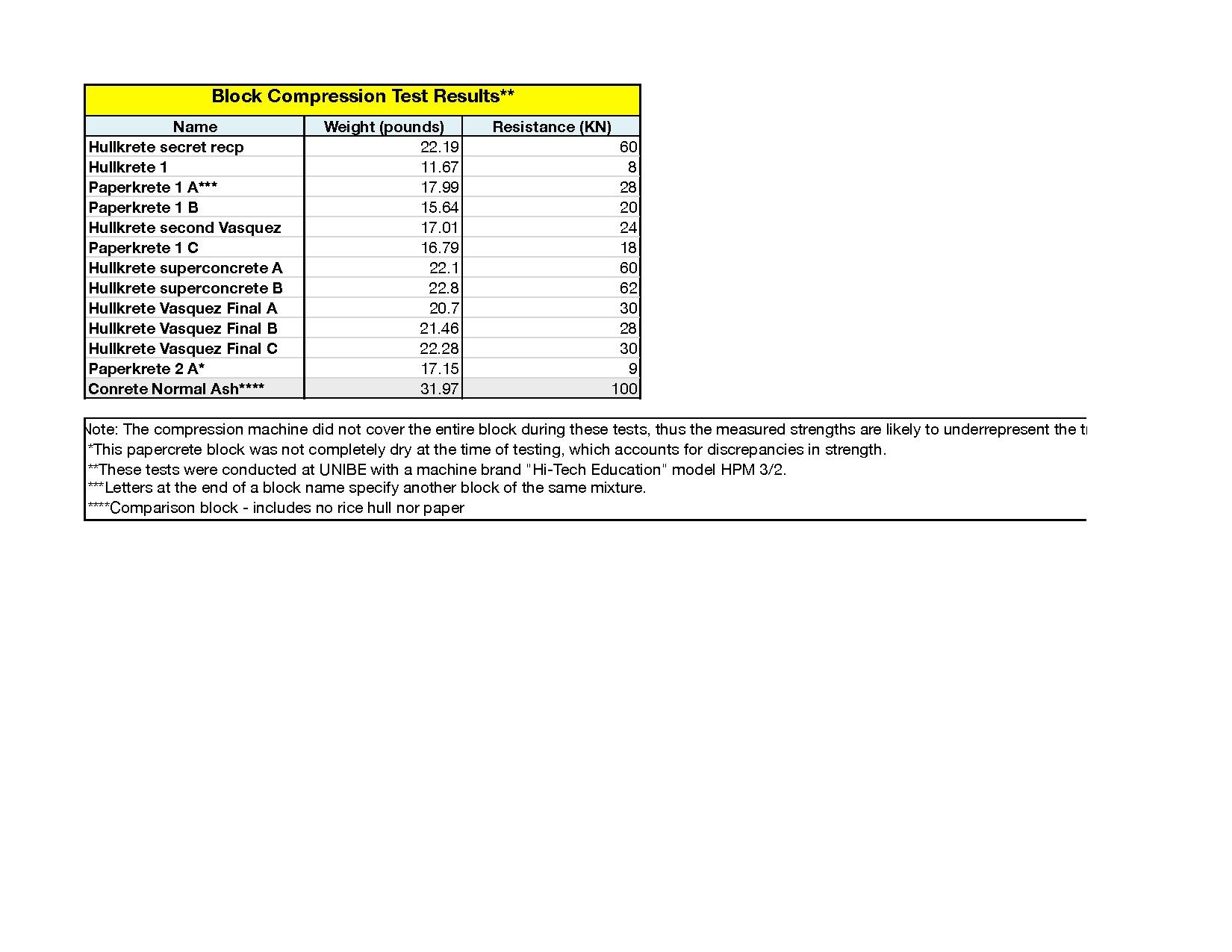 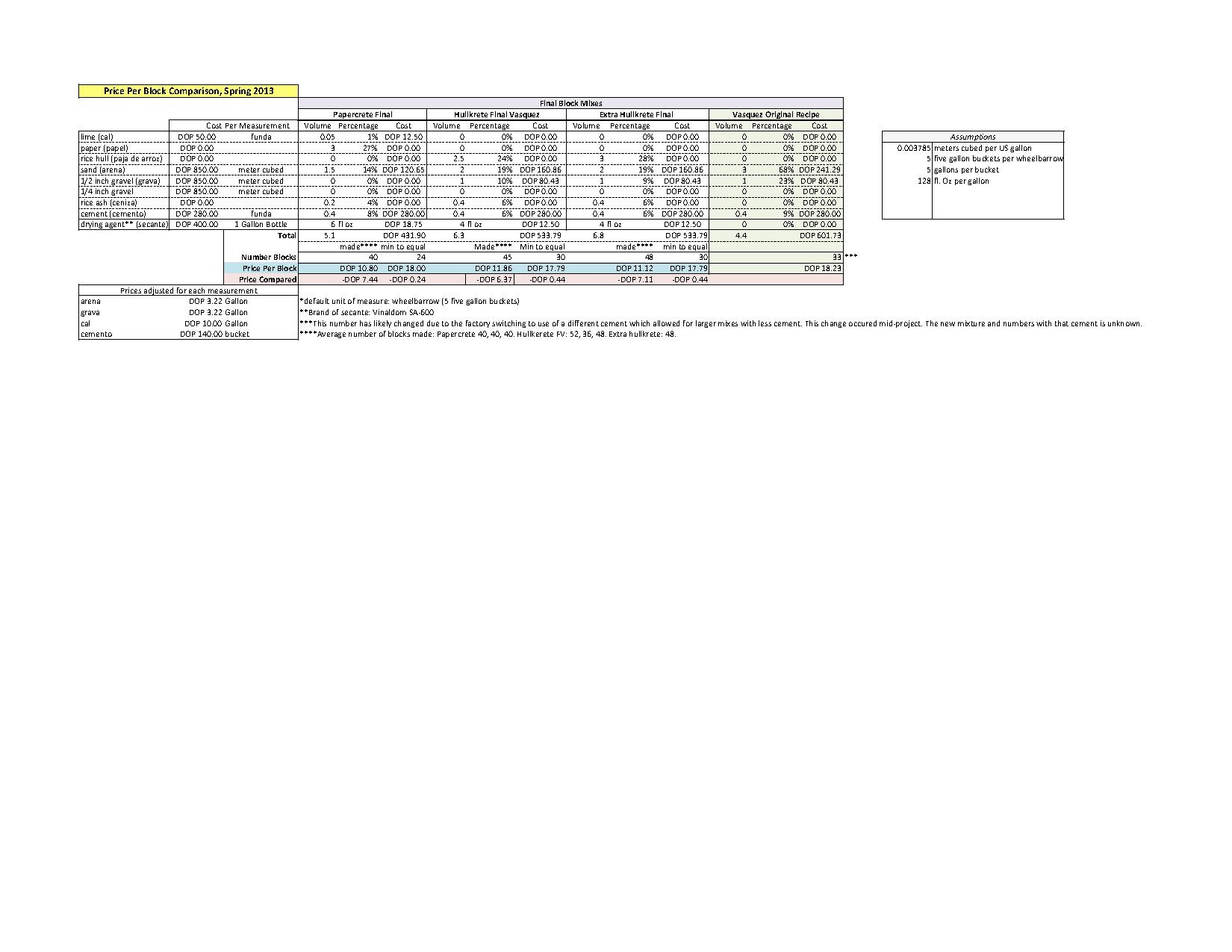 links to view the chart, which also includes the final mixtures we used and the number of blocks from each mixture.

Following is our budget for this project. Costs in both Dominican pesos (DR $) and US Dollars (US $) are included.

This timeline includes information about our progress throughout the project. It records the amount of time and preparation involved in creating both the blocks and the constructing the Botica Popular.