There has been a drastic rise in the use of plastic bottles over the past couple decades. Ecoladrillo allows otherwise discarded plastic bottles and trash to be used as a raw material for building construction. Figure 1 is a picture of trash that has become common throughout many parts of the world.[1]

The name is taken from ladrillo, a Spanish word for a brick or or paving stone made from baked clay.

How it's made[edit | edit source] 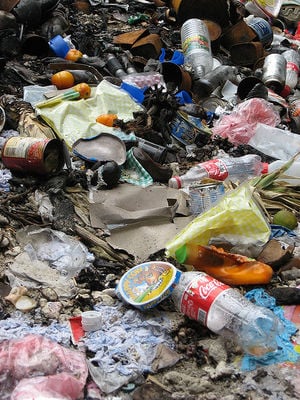 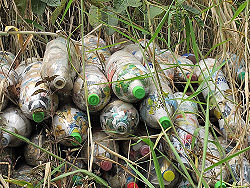 Plastics bottles are washed and dried as they are used, generally as a community effort. Each family unit of the community then stores the plastic bottles, and begins depositing waste in the bottles. The types of waste that go in the bottles include plastic bags, aluminum foil, and Styrofoam. None of the contents may be wet or dirty. The material is then compacted as the bottles are filled. Figure 2 shows what the final bottles look like before being integrated with the ladrillo. The bottle is a component used as a filler in a ladrillo. In an alternate method plastic bottles are filled with a dry clay material. [2]

Ecoladrillo is light weight and requires less raw material than other conventional forms of building. It has several advantages over conventional building it is lower weight, are very poor conductors of heat, . The construction components obtained are poor conductors of heat so provide better thermal insulation than other traditional building materials. The building blocks of recycled plastics have similar water absorption to other traditional walls.[3]. In 2005 in an article published for the International Conference for "Passive and Low Energy Cooling for the Built Environment." Tests were carried out on a type of Ecoladrillo that integrated interior plaster planes, with columnar bottles were used in the project design. The thermal performance of the structures was then evaluated and was found that in the extreme weather conditions as well as the temperate ones the indoor air temperature remained comfortable(14-22 degrees Celsius)[4]

The Challenges of Eco ladrillo is that although it drastically cuts the cost of raw materials, it requires a lot of man power. Bricks made out of recycled plastics have less resistance than other building materials, but enough to be used as walls of houses with seismic integrity.[5]

Ecoladrillo has been used in several places including the Easter Islands and Chile. The picture shown in Figure 3 is part of a classroom in the Phillipines. Ecoladrillo has been used mostly for communal centers such as schools. Fundacion de la paz is currently working on developing a commercial version of ecoladrillo, called an Ecopanel which they hope to market and sell and further raise awareness of the issues. [5] 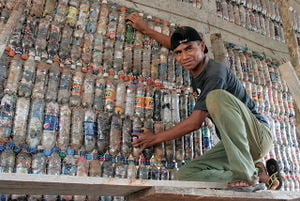 Its viability has been shown on a large scale with a more evolved form using plastic bottles to construct large scale buildings. In Tapei, Taiwan the Ecoark was constructed in a similar way to Ecoladrillo, however the technology was more evolved. The building shown in Figure 3 used 1.5 million recylced plastic bottles to raise awareness of recycling and environmental issues. [6]

Other technologies that use similar technology are ecological panels. They are made with recycled bottles as well as 10 gauge steel. The advantages Ecological panels have over the ecoladrillos is better acoustics as well as being a lot more versatile in terms of precision cuts, giving it a lot more uses than just wall or roofing. [7] 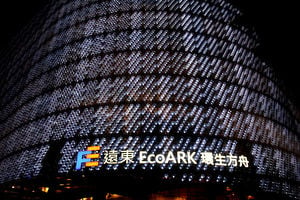 Use of PET Bottles Stuffed with Sand/Earth[edit | edit source]