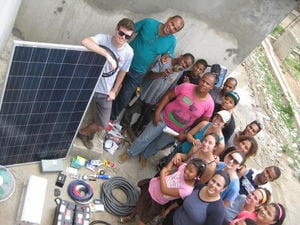 This project is a follow-up to the solar panel systems installed in La Yuca and Ghetto2Garden, in addition to the installation of a new system completed in Las Malvinas. The following page will cover system assessments, costs, and how to install a system. The background goes into the past projects, as well as problems faced by the solar team. The literature review outlines information specifically for PV solar panel systems and some information on education matters, as the solar team involved the community in the installation process. The timeline displays the daily tasks of the project followed by the budget. In the last portion of the page, there is a guide explaining the installation of the Las Malvinas system.

In the summer of 2015, Practivistas from Cal Poly Humboldt and Universidad Iberoamericana joined with three communities around Santo Domingo, Dominican Republic to improve previous Practivistas solar systems as well as build a new solar photovoltaic system. La Yuca, Ghetto2Garden, and Las Malvinas are communites that Practivistas have worked with in the past. In 2014, a solar system was installed in a small La Yuca school to power lights and fans. The goal of the 2015 team was to run tests to check the health of the battery and to fix any issues found with the system. The same was needed for Ghetto2Garden. The final challenge was to teach community members in Las Malvinas how solar systems work and by bringing collective knowledge together- construct a small solar system. The system was installed in a public location in Las Malvinas to power three LED lights and a fan with help from the community. Amongst all these projects, it was a priority to educate and involve members of the communities so that each system can be maintained by the people who use them.

The following page mainly concentrates on the Las Malvinas installation. To view the updates regarding the La Yuca system, click here. For more information about Getto2Garden, click here.

After meeting with the community of Las Malvinas, Tomas of Ghetto2Garden, and the director of the school in La Yuca, our group thought these were the most important criteria of the three different solar projects.

Here is the link to our Practivistas solar 2015/lit review

This section covers the specific steps taken by the solar 2015 team in order to assess and maintain the systems in La Yuca and Ghetto2Garden as well as achieve a completed solar system in Las Malvinas.

The following table outlines the tasks completed by the solar 2015 team.

The following outlines the steps for installing the solar energy system at the Botica. 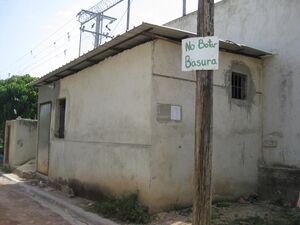 The Botica in Las Malvinas

Prior to the installation of the solar panel system at the botica, there were two workshops held in Las Malvinas. All and anyone was invited to these workshops as a place to learn from one another about photovoltaic technology and discuss the system that the community would be installing that following Sunday. The purpose of these workshops was to share knowledge of the needed system components, on how to wire the components, and on how to size the components to support the desired energy needs.

Worksheets of The Day[edit | edit source] 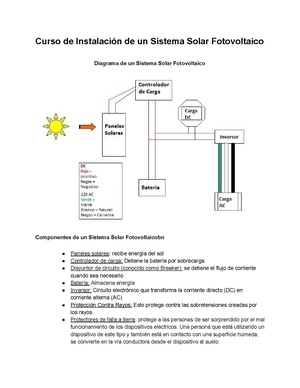 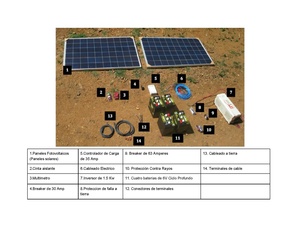 Worksheet of The Day[edit | edit source] 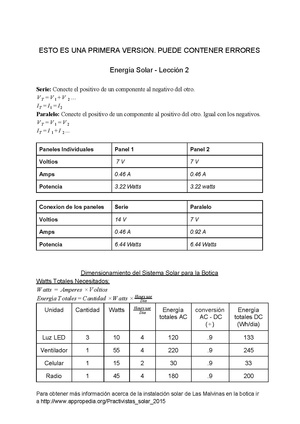 For help with sizing your system you can use this spreadsheet. There is an english version and spanish version.

Wire the 12V batteries in series. Then take the inverter terminal end cables and wire the
positive and negative cables from the inverter to the batteries.

The finished system in the Botica 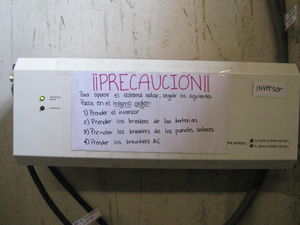 To protect one's solar panel system, the components MUST be turned on in this order:

The components MUST be turned off in reverse order:

What Will be Powered[edit | edit source]

Below presents what loads will be powered by the system within the Botica and a recommended length of time the loads should be operated.

Loads in the Botica[edit | edit source]

Using this test, one will be able to learn how many hours certain loads can be used without sun. This test will also provide information about how long it takes the battery to reach full charge on a clear day, and reveal any malfunctions in the components.

To learn about the testing results for Ghetto2Garden, go to the Update 2015 section on the Ghetto2Garden page.

To learn about the testing results for the La Yuca system, go to the Update 2015 section on the La Yuca page.

The installation was very successful and all the components were connected correctly delivering power to the Botica. After having hands on discussions and workshops prior to the installation, the residents of Las Malvinas know the system and the functions of the components. They can maintain the system over the years and share their knowledge to other members to take proper care.

System improvements to be made in the future:

Working Together for Energy[edit | edit source]

Why Solar, Why Workshops?[edit | edit source]

Solar is a great resource because it is abundant and everyday the sun is shining. Those qualities make it very widely used amongst many organizations that want communities with little exposure to the technology to become independent. The only down fall is that the system components are expensive and for the system to be successful there needs to be someone knowledgeable on solar power to maintain it. That is why it is important to host workshops so communities that are having solar energy systems installed, have an understanding of the components and their functions. This increases the longevity of the system and builds a stronger resilient community that can truly become independent. When the workshops are over and the system is installed, what will be left behind is knowledge amongst friends and family who can share their knowledge on Solar across the communties.

For the botica, the workshops that were organized, presented the basic materials on system components, what they do, and ways to wire. There were two pre-planning community workshops. In the pre-planning workshops the community decided what type of workshops they would like. Then there were two workshops, a day of hands on wiring of the system, and the final day was the complete installation of the system. The second day involved a lab that was a hands on representaton of what we learned the first day. At the end of the second day, together the community sized the system based off of what they learned from the couple workshops and their energy needs. We all came back a few days later and started the wiring. Because of the workshops the students weren't students any more, they became the teachers to friends and families explaining and sharing the wiring process. The following day, the construction went the same way and the solar energy system was successfully installed, delivering power to the botica. 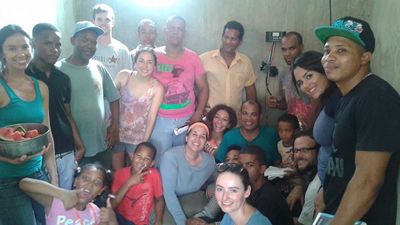 Page data
Retrieved from "https://www.appropedia.org/w/index.php?title=Practivistas_solar_2015&oldid=639630"
Cookies help us deliver our services. By using our services, you agree to our use of cookies.
Categories:
Maintenance categories:
Comments
Privacy policy · About Appropedia · Disclaimers · Mobile view · Content is available under CC-BY-SA-4.0 unless otherwise noted.
</html