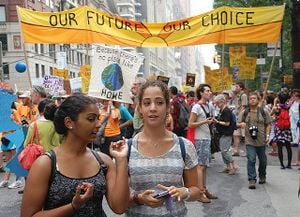 CASwiki news articles have a focus on news of community action for sustainability. This article is an offshoot from Climate action USA and is for news and comment in that context. Image: New York, September 21, 2014. Hundreds of thousands of protesters filled Central Park West on Sunday, demanding "system change not climate change." In this photo: the student and youth contingents were quite large - quite likely the largest segment of the march. Attribution: Thomas Good
Location data

How the president-elect plans to tackle climate change, Nov 10 [1]

The Key to Solving the Climate Crisis Is Beneath Our Feet, Dec 26 [2]

With a Green New Deal, here's what the world could look like for the next generation, Dec 5 [6]

The two fastest-growing jobs in the U.S. right now are solar installers and wind technicians. Dec 3 [7]

The fight against climate change: four cities leading the way in the Trump era, Jun 13 [13]

Bucking Trump, These Cities, States and Companies Commit to Paris Accord, Jun 1 [14]

The biggest doctors' groups in America have joined the climate change fight, Mar 15 [17]

This climate lawsuit could change everything. No wonder the Trump administration doesn't want it going to trial, Mar 9 [18]

“Court rules that children can sue the government over climate negligence” by @ngeiling, Nov 11 [22]

From now on, every government agency will have to consider climate change, Aug 2 [23]

There’s Now A Way To Find Out How Much Of Your Retirement Is Invested In Fossil Fuels, September 17 [24]

Most Republicans Say They Back Climate Action, Poll Finds, January 30 [25]

Obama Turns to Web to Illustrate the Effects of a Changing Climate, March 19 [27]

Is Your State Prepared For The Health Impacts Of Climate Change? March 5 [28]