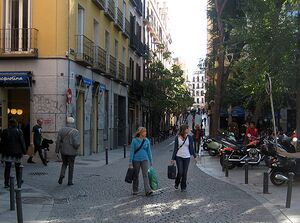 Spain (Spanish: España, [esˈpaɲa] (listen)), or the Kingdom of Spain (Reino de España), is a country primarily located in southwestern Europe with parts of territory in the Atlantic Ocean and across the Mediterranean Sea. The largest part of Spain is situated on the Iberian Peninsula; its territory also includes the Canary Islands in the Atlantic Ocean, the Balearic Islands in the Mediterranean Sea, and the autonomous cities of Ceuta and Melilla in Africa. The country's mainland is bordered to the south by Gibraltar; to the south and east by the Mediterranean Sea; to the north by France, Andorra and the Bay of Biscay; and to the west by Portugal and the Atlantic Ocean. With an area of 505,990 km2 (195,360 sq mi), Spain is the second-largest country in the European Union (EU) and, with a population exceeding 47.4 million, the fourth-most populous EU member state. Spain's capital and largest city is Madrid; other major urban areas include Barcelona, Valencia, Seville, Zaragoza, Málaga, Murcia, Palma de Mallorca, Las Palmas de Gran Canaria and Bilbao.

Anatomically modern humans first arrived in the Iberian Peninsula around 42,000 years ago. Pre-Roman peoples dwelled in the territory, in addition to the development of coastal trading colonies by Phoenicians and Ancient Greeks and the brief Carthaginian rule over the Mediterranean coastline. The Roman conquest and colonization of the peninsula (Hispania) ensued, bringing a Roman acculturation of the population. Hispania remained under Roman rule until the collapse of the Western Roman Empire in the fourth century, which ushered in the migration of Germanic peoples and the Alans into the peninsula. Eventually, the Visigoths emerged as the dominant power in the peninsula by the fifth century. In the early eighth century, most of the peninsula was conquered by the Umayyad Caliphate and during early Islamic rule, Al-Andalus became the dominant peninsular power, centered in Córdoba. Several Christian kingdoms emerged in Northern Iberia, chief among them León, Castile, Aragón, Portugal, and Navarre and over the next seven centuries, an intermittent southward expansion of these kingdoms, known as Reconquista, culminated with the Christian seizure of the Emirate of Granada in 1492. Jews and Muslims were forced to choose between conversion to Catholicism or expulsion and the Morisco converts were eventually expelled. The dynastic union of the Crown of Castile and the Crown of Aragon was followed by the annexation of Navarre and the 1580 incorporation of Portugal (which ended in 1640). In the wake of the Spanish colonization of the Americas after 1492, the Crown came to hold a large overseas empire, which underpinned the emergence of a global trading system primarily fuelled by the precious metals extracted in the New World. Centralisation of the administration and further state-building in mainland Spain ensued in the 18th and 19th centuries, during which the Crown saw the loss of the bulk of its American colonies a few years after the Peninsular War. The country veered between different political regimes; monarchy and republic, and following a 1936–39 devastating civil war, the Francoist dictatorship that lasted until 1975. With the restoration of democracy under the Constitution of Spain and the entry into the European Union in 1986, the country experienced profound social and political change as well as an important economic growth.

In 2010 and 2011, an unrelated initiative in the village of San Cebrián de Mudá (190 inhabitants) in Palencia, northern Spain released 18 European bison (a species extirpated from Spain since the Middle Ages) in a natural area already inhabited by roe deer, wild boar, red fox and grey wolf, as part of the creation of a 240-hectare "Quaternary Park". Three Przewalski's horses from a breeding center in Le Villaret, France were added to the park in October 2012. Onagers and "aurochs" were planned to follow.

In 2016 and 2018, the True Nature Foundation reintroduced in total 7 European bison of the Lowland-Caucasian breeding line in Anciles Wildlife Reserve in the Parque Regional de Picos de Europa in the Cantabrian mountains in northern Spain. W

From Wikipedia:Anti-austerity movement in Spain

The anti-austerity movement in Spain, also referred to as the 15-M Movement (Spanish: Movimiento 15-M), and the Indignados Movement, was a series of protests, demonstrations, and occupations against austerity policies in Spain that began around the local and regional elections of 2011 and 2012. First starting on 15 May 2011, many of the subsequent demonstrations spread through various social networks such as Real Democracy NOW (Spanish: Democracia Real YA) and Youth Without a Future (Spanish: Juventud Sin Futuro).

Spanish media related the movement to the 2008–14 Spanish financial crisis, the Arab Spring, as well as demonstrations in North Africa, Iran, Greece, Portugal, and Iceland. The movement was also compared to Stéphane Hessel's political manifesto Time for Outrage!, which was seen to empower Spanish youth who were not in school, training, or employment. Protestors rallied against high unemployment rates, welfare cuts, politicians, and the two-party system in Spain, as well as the political system, capitalism, banks, and public corruption. Many called for basic rights, of home, work, culture, health and education. The movement transferred to Europe the model of the protest camp which had been formed in the Arab Spring, adapting it to a more countercultural framework. This would later expand until influencing the creation of Occupy Wall Street.

According to RTVE, the Spanish public broadcasting company, between 6.5 and 8 million Spaniards participated in these events.

Wikipedia: El Hierro, Energy: According to the Ministry for Industry, Tourism and Commerce, El Hierro will become the first island in the world to be energy self-sufficient. This will be achieved through a €54 million project combining a greater than 11 megawatt wind farm and two hydroelectric projects. El Hierro is the smallest and farthest south and west of the Canary Islands (an Autonomous Community of Spain), in the Atlantic Ocean off the coast of Africa, with a population of 10,162 (2003).

Andecha (from Latin indictia 'announcement) is voluntary, unpaid and punctual aid to help a neighbor carry out agricultural tasks (cutting hay, harvesting potatoes, building a barn, collecting apples to make cider, etc.). The work is rewarded with a snack or a small party and the tacit commitment that the person assisted will come with their family to the call of another andecha when another neighbor requests it. It is very similar to the Irish meitheal.

It should not be confused with another Asturian collective work institution, the sestaferia. In this, the provision of the service is mandatory (under penalty of fine) and is not called a to help of an individual but the provision of common services (repair of bridges, cleaning of roads, etc.)

Living without a job, other economic alternatives
Authors: The Coperach, Jan 9, 2017

Wikipedia: Mondragon Corporation: corporation and federation of worker cooperatives based in the Basque region of Spain. It was founded in the town of Mondragón in 1956 by graduates of a local technical college. Its first product was paraffin heaters. It is the seventh-largest Spanish company in terms of asset turnover and the leading business group in the Basque Country. At the end of 2012, it employed 80,321 people in 289 companies and organizations in four areas of activity: finance, industry, retail and knowledge. Mondragon cooperatives operate in accordance with Statement on the Co-operative Identity maintained by the International Co-operative Alliance.

Page data
Retrieved from "https://www.appropedia.org/w/index.php?title=Spain_community_action&oldid=668784"
Cookies help us deliver our services. By using our services, you agree to our use of cookies.
Categories:
About Appropedia · Policies · Contact · Content is available under CC-BY-SA-4.0 unless otherwise noted.