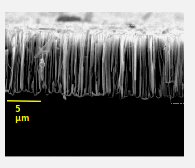 A systematic investigation is performed to determine the effects of the concentration of silver on metal assisted chemical etching (MaCE) for nanostructure formation mechanisms on silicon as well as their resultant optical properties. Silver nitrate concentrations of 8mM, 4mM, 3mM and 2mM with hydrogen fluoride were used for the preparation of p-type silicon nanostructures. Experimentally, it is observed that when the catalysis molarity concentration is decreased in the etching processes, it resulted in nanostructures ranging from 140 to 60 nm, respectively over the concentrations investigated. A detailed analysis of the optical properties and structure provided insight into the physics of their formation. In addition, the results show the silicon nanostructures formed black silicon where in the visible region of the spectrum the reflectance dropped by an order of magnitude. The results indicate MaCE is a promising approach to the manufacturing of antireflection coatings on black silicon-based solar photovoltaic cells. MaCE is a simple and scalable approach to enhance the optical absorption of silicon and improve the overall efficiency of the solar cell without adding significantly to the complexity, capital expenditure or cost of production.