There is an important need for clean, pure drinking water in many developing countries. Often water sources are brackish (i.e. contain dissolved salts) and/or contain harmful bacteria and therefore cannot be used for drinking. In addition, there are many coastal locations where seawater is abundant but potable water is not available. Pure water is also useful for batteries and in hospitals or schools.

Distillation is one of many processes that can be used for water purification. This requires an energy input, as heat, solar radiation can be the source of energy. In this process, water is evaporated, thus separating water vapour from dissolved matter, which is condensed as pure water.

Solar water distillation is a solar technology with a very long history and installations were built over 2000 years ago, although to produce salt rather than drinking water. Documented use of solar stills began in the sixteenth century. An early large-scale solar still was built in 1872 to supply a mining community in Chile with drinking water. Mass production occurred for the first time during the Second World War when 200,000 inflatable plastic stills were made to be kept in life-crafts for the US Navy.

There are a number of other approaches to water purification and desalination, such as photovoltaic powered reverse-osmosis, for which small-scale commercially available equipment is available. These are not considered here.

In addition, if treatment of polluted water is required rather than desalination, slow sand filtration is a good option. The purpose of this technical brief is to provide basic information and direct the reader to other, more detailed sources.

The energy required to evaporate water is the latent heat of vaporisation of water. This has a value of 2260 kilojoules per kilogram (kJ/kg). This means that to produce 1 litre (i.e. 1kg since the density of water is 1kg/litre) of pure water by distilling brackish water requires a heat input of 2260kJ. This does not allow for the efficiency of the heating method, which will be less than 100%, or for any recovery of latent heat that is rejected when the water vapour is condensed.

It should be noted that, although 2260kJ/kg is required to evaporate water, to pump a kg of water through 20m head requires only 0.2kJ/kg. Distillation is therefore normally considered only where there is no local source of fresh water that can be easily pumped or lifted.

Figure 1 shows a single-basin still. The main features of operation are the same for all solar stills. The incident solar radiation is transmitted through the glass cover and is absorbed as heat by a black surface in contact with the water to be distilled. The water is thus heated and gives off water vapour. The vapour condenses on the glass cover, which is at a lower temperature because it is in contact with the ambient air, and runs down into a gutter from where it is fed to a storage tank. 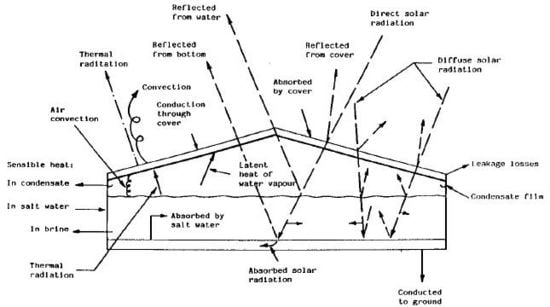 Design objectives for an efficient solar still For high efficiency the solar still should maintain:

A high feed water temperature can be achieved if:

A large temperature difference can be achieved if:

Single-basin stills have been much studied and their behaviour is well understood. Efficiencies of 25% are typical. Daily output as a function of solar irradiation is greatest in the early evening when the feed water is still hot but when outside temperatures are falling.

Material selection is very important. The cover can be either glass or plastic. Glass is considered to be best for most long-term applications, whereas a plastic (such as polyethylene) can be used for short-term use.

Sand concrete or waterproofed concrete are considered best for the basin of a long-life still if it is to be manufactured on-site, but for factory-manufactured stills, prefabricated ferro-concrete is a suitable material.

Multiple-effect basin stills have two or more compartments. The condensing surface of the lower compartment is the floor of the upper compartment. The heat given off by the condensing vapour provides energy to vaporize the feed water above. Efficiency is therefore greater than for a single-basin still typically being 35% or more but the cost and complexity are correspondingly higher.

Wick stills - In a wick still, the feed water flows slowly through a porous, radiation-absorbing pad (the wick). Two advantages are claimed over basin stills. First, the wick can be tilted so that the feed water presents a better angle to the sun (reducing reflection and presenting a large effective area). Second, less feed water is in the still at any time and so the water is heated more quickly and to a higher temperature.

Simple wick stills are more efficient than basin stills and some designs are claimed to cost less than a basin still of the same output.

Emergency still - To provide emergency drinking water on land, a very simple still can be made. It makes use of the moisture in the earth. All that is required is a plastic cover, a bowl or bucket, and a pebble.

Hybrid designs - There are a number of ways in which solar stills can usefully be combined with another function of technology. Three examples are given:

An approximate method of estimating the output of a solar still is given by:

In a typical country the average, daily, global solar irradiation is typically 18.0 MJ/m² (5 kWh/m²). A simple basin still operates at an overall efficiency of about 30%. Hence the output per square metre of area is:

The yearly output of a solar still is often therefore referred to as approximately one cubic metre per square metre.

Despite a proliferation of novel types, the single-basin still remains the only design proven in the field. At least 40 single-basin stills with areas of greater than 100m (and up to 9000m² were built between 1957 and 1980. 27 had glass covers and 9 had plastic. 24 of the glass-covered stills are still operating in their original form, but only one plastic-covered unit is operational. Hundreds of smaller stills are operating, notably in Africa. The cost of pure water produced depends on:

The cost of a solar still is normally UK £50-70/m². The price of land will normally be a small proportion of this in rural areas, but may be prohibitive in towns and cities. The life of a glass still is usually taken as 20 to 30 years but operating costs can be large especially to replace broken glass. Performance varies between tropical locations but not significantly. An average output of 2.5-3.0 1/m²/day is typical, that is, about 1m³/m²/year.

Would a solar still suit your needs?[edit | edit source]

Human beings need 1 or 2 litres of water a day to live. The minimum requirement for normal life in developing countries (which includes cooking, cleaning and washing clothes) is 20 litres per day (in the industrialised world 200 to 400 litres per day is typical). Yet some functions can be performed with salty water and a typical requirement for distilled water is 5 litres per person per day. Therefore 2m² of still are needed for each person served.

Solar stills should normally only be considered for removal of dissolved salts from water. If there is a choice between brackish ground water or polluted surface water, it will usually be cheaper to use a slow sand filter or other treatment device. If there is no fresh water then the main alternatives are desalination, transportation and rainwater collection.

Unlike other techniques of desalination, solar stills are more attractive, the smaller the required output. The initial capital cost of stills is roughly proportional to capacity, whereas other methods have significant economies of scale. For the individual household, therefore, the solar still is most economic. For outputs of 1m³/day or more, reverse osmosis or electrodialysis should be considered as an alternative to solar stills. Much will depend on the availability and price of electrical power.

For outputs of 200m³/day or more, vapour compression or flash evaporation will normally be least cost. The latter technology can have part of its energy requirement met by solar water heaters. In many parts of the world, fresh water is transported from another region or location by boat, train, truck or pipeline. The cost of water transported by vehicles is typically of the same order of magnitude as that produced by solar stills. A pipeline may be less expensive for very large quantities. Rainwater collection is an even simpler technique than solar distillation in areas where rain is not scarce, but requires a greater area and usually a larger storage tank. If ready-made collection surfaces exist (such as house roofs) these may provide a less expensive source for obtaining clean water.

The goals of the Association are the development and promotion of the appropriate use of desalination (the method of removing salts and other impurities from water) and desalination technology worldwide.