This content is abstracted at Peace Corps Wiki. Click here to see other appropriate technologies from the Peace Corps here on Appropedia.
Project data

With <200mm of rainfall, saltwater infiltrated wells and expensive oil-guzzling desalination plants as the main source of fresh water in Cape Verde, it is important to consider researching alternative sources of production. As an island country with endless supply of seawater and over 3000 hours of annual sunlight, Cape Verde is an ideal country for solar desalination.

The goal of the project is to design a high output, cost-effective model using local materials. If a cheap design with reasonable output can be engineered, it could create both an industry of employment for young Capeverdeans and, given the abundant supply of sun and saltwater, a reliable source of fresh water for the country.

This is the third phase of this solar desalination project:

Phase I-The first phase was a 0.82m2 prototype model completed and tested in December 2007. The completed system produced 1.75L of distilled water per day and cost 16,000CVE (210 USD). The output was believed to be low because of the distance the water had to rise to condense on the glass. Adjustments were made in the second phase.

Phase II-The second phase – designed and constructed by (now Returned) Peace Corps Volunteer Nicholas Hanson, nfhanson@gmail.com -was an improved 1m2 model redesigned to include three shelves of water (7cm deep) to decrease the height of condensation. Additionally, a solar water pre-heater (an enclosed 0.7m2 box with 4m of zigzag plastic tubing) was constructed to preheat the saltwater before it entered the still. At the first test however, the hot water heater burst under pressure at the 90º elbow joints of the zigzag. The second phase was completed in July 2008. It produced x L of distilled water per day and cost 16,250 ECV (214 USD) (production/price not including the solar water heater).

Design improvements for the third phase include decreasing the depth of the water for faster evaporation time, repairing/modifying the solar water pre-heater and dripping the saltwater from the water heater through the still into a brine pool to prevent salt build-up.

The proposed third phase model consists of a design using corrugated concrete panels as the main design modification – maintaining a short distance between the saltwater basin and glass and decreasing the depth of each shelf (<2cm). The hot water heater will be modified to a large circular tube layout, rather than the zigzag layout, in order to prevent high-pressure spots on the plastic tube. The prototype model will also be attached to the drain of the new still model to serve as a slower-distilling output reservoir (brine pool).

When activated, saltwater will drip through the solar hot water heater into the phase III still. When the undistilled, very salty seawater, reaches the bottom undulation of the 10º-23º angled still, it will drain into the prototype basin – thus avoiding corrosive salt build-up and maintaining a closed system in the improved model and, in theory, making it easier to remove the salt/residue of the seawater once the water has evaporated.

Note: Construction of the still, as was the first two phases, will be performed with the Civil Construction students at the Grau Duque Henri Technical School in Assomada, Cape Verde. All models utilize local construction materials.

Complete proposals, design plans and bill of materials can be found at www.peacecorps.org.cv/solar-project.

To build the solar still and water heater, 22580 ECV (298 USD) will be required to purchase materials. 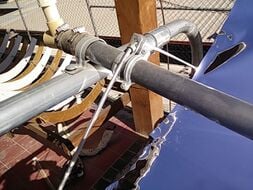 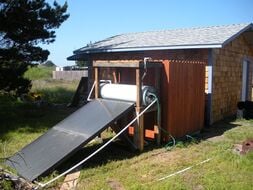 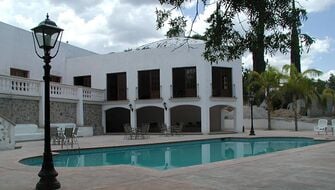 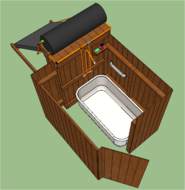