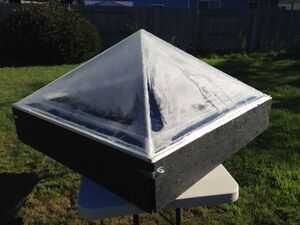 It's Always Sunny worked with Mary Mattingly, an artist based in New York City. She is collaborating with Live Arts/Fringe to design the WetLand project. Our objective is to design a long lasting desalination system that produces distilled water from the Delaware River for the inhabitants of the barge. The desalination system will promote sustainability through inspirational design and compliment the overall theme of the barge. 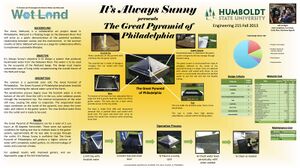 It's Always Sunny's solution and final design is a pyramidal solar still called The Great Pyramid of Philadelphia. This still desalinates brackish water from the Delaware River and turns it into freshwater, as shown in Figure 1 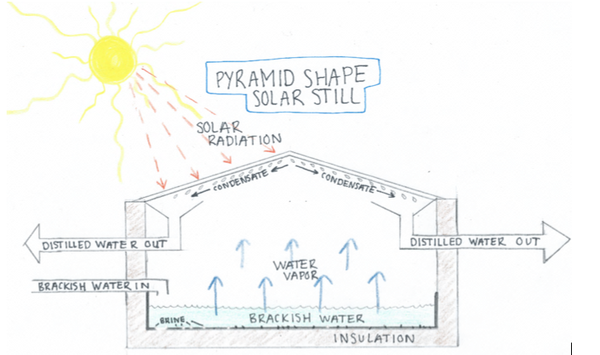 The table below shows the client criteria for our project. The criteria is organized by it's relative weight of importance on a scale of 0-10, with 10 being the high. 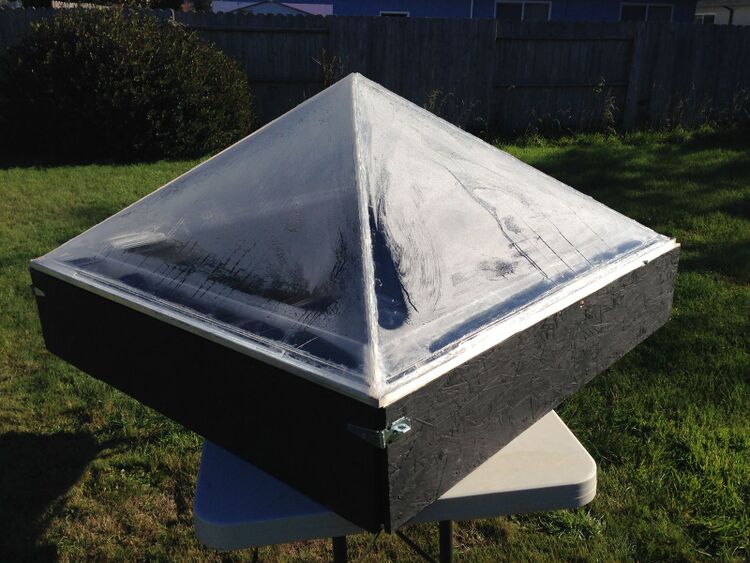 The top of The Great Pyramid of Philadelphia is a pyramid made of plexiglass, as shown in Figure 3. The sides are sealed with food grade silicon, which will not add any contaminants to the clean water that will condensate on the inside of the pyramid. At the base of the pyramid, an aluminum square base keeps the pyramid rigid and in place. 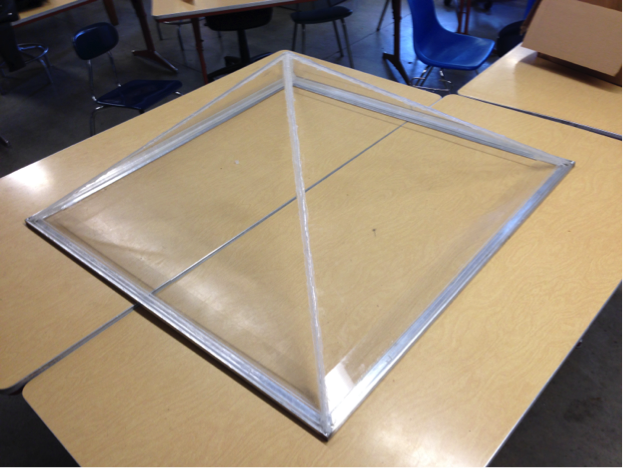 The gutter system of the Great Pyramid of Philadelphia is made from plexiglass strips adhered to the bottom of the pyramid top at an angle to form a V shape, as shown in Figure 4. The condensed water that runs down the sides of the pyramid is collected in the V-shaped gutters. At one corner of the pyramid is an outlet that pipes out the desalinated water into storage, as shown in Figure 5. The outlet is made of plexiglass and adhered to the outside of the pyramid, and the tubing to pipe out the clean water is made of polyethylene, a safe plastic for drinking water. After the water is piped out, it will run through a carbon filter before being stored. 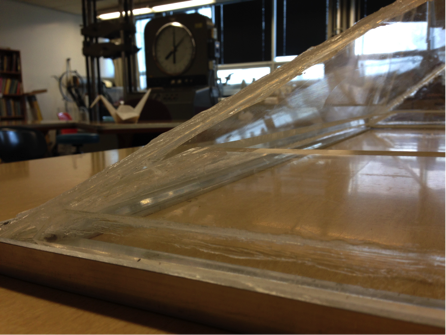 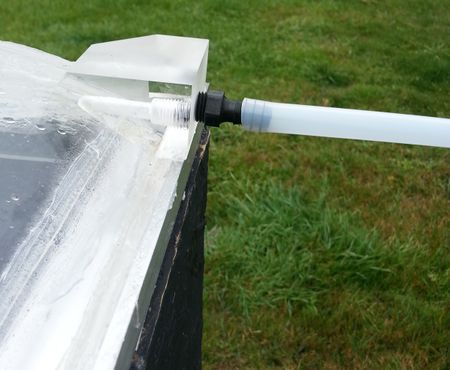 Base and Tray[edit | edit source]

The base of The Great Pyramid of Philadelphia is made of plywood and supports the pyramid top. The base is painted black and lined with pond liner, as shown in Figure 6, to seal and protect the wood from moisture. The pond liner is attached to the base with strips of plexiglass and stainless steel screws, as shown in Figure 6. One of the sides of the base is a door, allowing access to the inside of the base. Inside the base is a black high density PVC tray, as shown in Figure 6. The brackish water will be put directly into the tray for the desalination process. On the bottom of the base are adjustable feet that allow the user to position the still so the outlet on the pyramid is the lowest point, enabling the water to easily flow out. 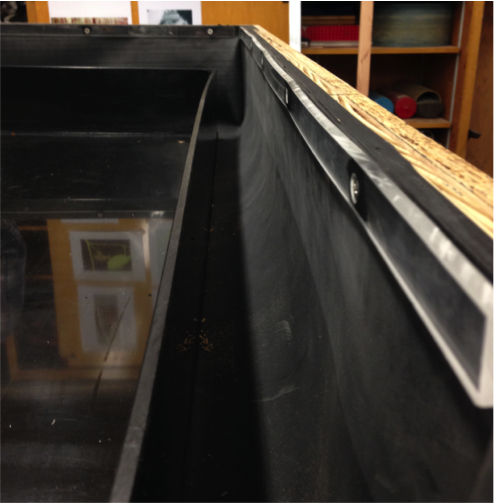 Figure 6: Base and Tray

The sortable table below shows the cost and quantity of the materials we used to build our solar still.

This pie chart shows the hours spent throughout our project. 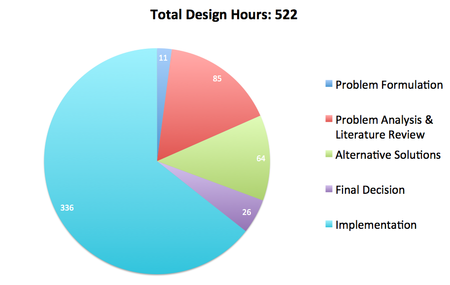 The Great Pyramid of Philadelphia ran for a total of 5 sun hours at 40 degrees Fahrenheit. These were not optimal conditions for testing and due to multiple leaks in the gutter system, approximately 30 mL was able to escape through the outlet. It's Always Sunny is confident that The Great Pyramid of Philadelphia will produce a higher volume of water with completely sealed gutters, no internal leakage of water, and a warmer climate.

Step-by-step instructions of how to replicate our solar still are shown below. 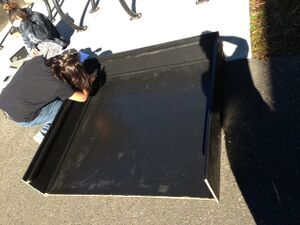 Build a wooden base structure with 4'x4' dimensions and walls that are 10" tall, and include a door.
2 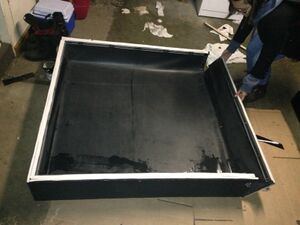 Paint the base to protect it from the elements, then line it with pond liner to completely seal it.
3 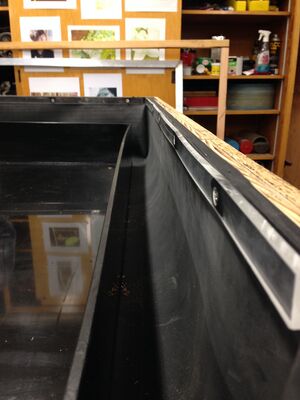 Secure the pond liner in place using strips of plexiglass.
4 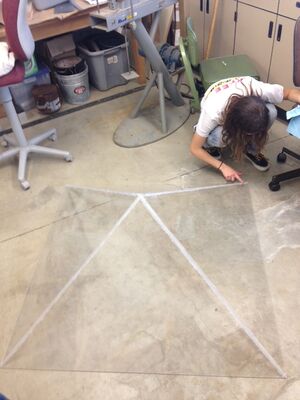 Seal plexiglass triangles together with food-grade silicon to form a pyramid top.
5 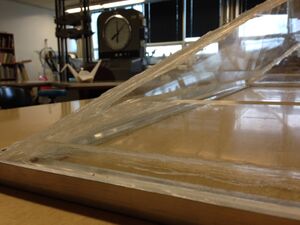 Bevel small strips of plexiglass and adhere them to the inside of the pyramid to serve as gutters, then seal them in with food-grade silicon.
6 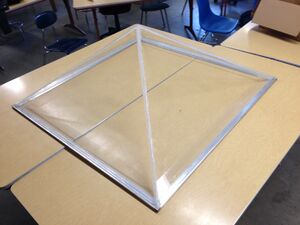 Build an aluminum structure that will house the pyramid and seal the pyramid to it.
7
[[File:|thumb|]]
Attach weatherproofing strips to the top of base and rest pyramid on top of it, sealing the interior from the exterior.
8 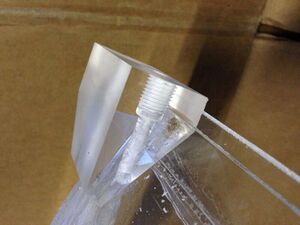 Build an outlet for the freshwater to escape.
9 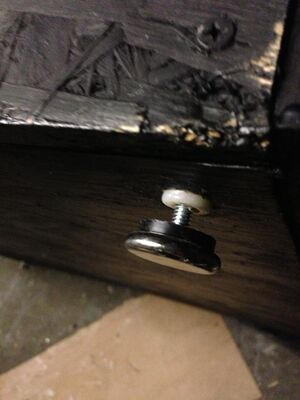 Attach adjustable feet to base in order to give the still the necessary slant it needs for water to flow out smoothly.