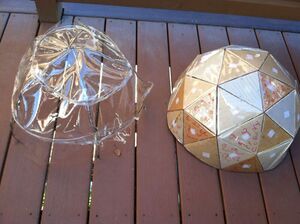 The WetLand Project is collaboration between Live Arts/Fringe, Mary Mattingly, and Cal Poly Humboldt Engineering 215 students. The WetLand Project is a temporary public art installation for the summer of 2014, located on the Delaware River in Philadelphia. The project is an island based ecosystem and a floating mobile habitat; that intends to educate the Philadelphia community about sustainable use and living, by being a representative and partner in the world of socially involved visual arts. The floating mobile habitat is barge with three domes that supports two to ten people.

The criteria and constraints are established by the collaboration between the clients of the WetLand Project and the Replenish Life Team. The table below defines the criteria needed to be met by the final design ranked by importance with weighted values(0-10) .

Water will flow down the vinyl flap into a 5-gallon bucket. A first-flush diverter will capture the first ten minutes of collected rainwater off the dome to discard any debris entering the storage tanks. The first flush diverter contains a plug and ball at the bottom of the PVC pipe. Once the ball floats to the brim of the pipe, closing the chamber, clean water will flow into a surge tank.

The overflow mechanism uses a surge tank and a discharge mechanism to prevent water from back flowing into the 5-gallon bucket. The back pressure from the filters during a big rain event causes back flow.

The purification system filters water before it becomes stagnant, preventing bacteria growth. We specifically chose to use two ceramic filters so we would be able to lower the maintenance cost for the residence on the barge. The ceramic filters used are a 25-micron and 5-micron.

The Implementation and Specification Section will cover the steps required to implement the final design of the Replenish Life Team.

The maintenance required by Jawbreaker is three hours per month. The time required to clean the catchment system is broken into sections as shown in the Pi-chart.

To clean the vinyl flap the residence will need to spend a combined time of one hour per month. Cleaning the vinyl flap will include making sure no debris is gathering along the stitch and removing any debris that is caught on the catchment. 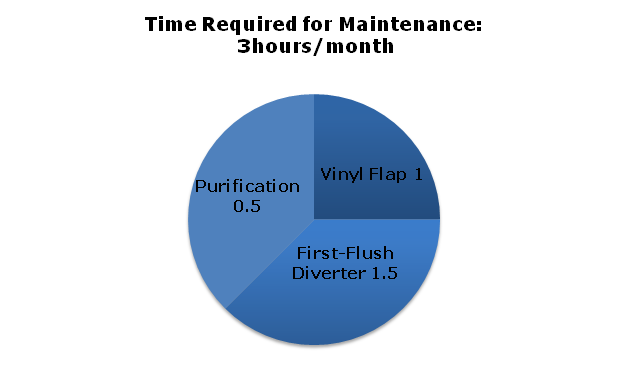 The implementation cost is the money we spent on making a prototype and for the materials to replicate the design on the actual dome. The total cost is $155.91. The Replenish Life team saved the client $421.49, due to donations of materials and discounts at ace.

The Total Design hours are the hours spent on the project, which are broken down into phases. 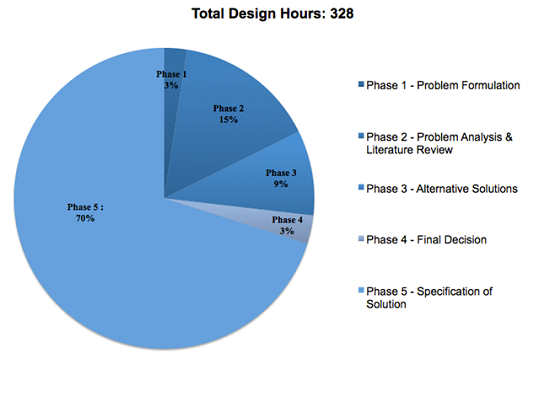 Page data
Retrieved from "https://www.appropedia.org/w/index.php?title=WetLand_spiral_rainwater_catchment&oldid=640865"
Cookies help us deliver our services. By using our services, you agree to our use of cookies.
Categories:
Maintenance categories:
About Appropedia · Policies · Contact · Content is available under CC-BY-SA-4.0 unless otherwise noted.