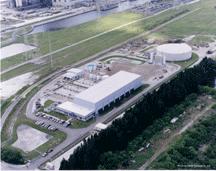 The desalination of ocean water or brackish groundwater is an alternative to obtaining water from fresh water sources (surface water or groundwater), and could be used to replace the need for a water supply dam. Several different technologies exist to remove salt and other impurities from ocean water. Desalination is already used as a main source of potable water in the Caribbean, Mediterranean and Middle East.[1]

The two most commonly used technologies are:

Thermal distillation is possible using solar heat or even waste heat. For, solar heat can be directed unto the water using CSP-plantsW (see solar thermal)[2] Some successes have been claimed for small scale solar distillation - however it has usually given weak results and/or has high capital costs, and so is not the best option in most situations.

Other technologies, like reverse osmosis can create unlimited amounts of pure water from polluted water, ocean water. On vehicles as yachts, seawater through reverse osmosis can also be used. Water makers are available herefore that convert seawater and electricity into potable water and brine.

For coastal states, desalination represents an opportunity to draw on oceanic water resources. If the appropriate conditions are present, a desalination plant has the potential to replace an existing or a planned dam.

Desalination shows a very distinct economy of scale. This means that larger plants can producer water at lower cost and lower energy consumption. As a consequence desalination plants tend to be large requiring high investments for the plants and energy supply facilities.[3] In the case study below, the desalination plant built in Tampa, Florida cost $110 million, of which the Southwest Florida Water Management District paid $85 million. The water produced in this plant is expected to sell for about $2 per 1,000 gallons, far below the desalination industry standard. The cost of regular groundwater sources is about $1.00 per 1,000 gallons. As technology continues to progress, the cost of desalination is expected to decrease, particularly when compared to many of the alternatives.[4]

A second more modern example is the Perth Seawater Desalination Plant, Kwinana, Australia.[5] The total project cost was AUS$387m for an annual output of 45 GL, with expected water cost at AUS$1.2 for 1000 L (kL) and a specific energy demand of 4.0kWh/kL to 6.0kWh/kL. Small scale desalination plants are due to the economy of scale relatively expensive. This is even valid for plants that utilise solar energy. Typical water production prices for plants with less then 10'000 L/d capacity are between 4 - 12 US$ per 1000L (kL) and have energy requirements between 23 and 40 kWh/kL.[6] Some recent work done on numerical simulations on optimized CPCs for solar stills offered some hope for decreasing costs considerably,[7] but further experimental and field tests are needed to verify the life cycle costs of distilled water produced on the small scale. open access

Tampa, Florida is home to the largest desalination plant in the United States. It is projected to produce 25 million gallons per day in order to meet 10 percent of the region's water needs. The saltwater undergoes osmosis and is then treated with lime and chlorine to ensure proper alkalinity. Historically, this region has derived its drinking water supply from groundwater. However, their new water plan calls for production cutbacks at the 11 existing northern Tampa Bay well fields to allow environmentally stressed areas to recover. To accommodate these cutbacks and still produce enough water for the region, Tampa Bay Water is turning to alternative sources for water, like desalination. Unlike other desalination plants in the United States, the Florida plant is not an emergency water source, but an economically sound, major source of a consistent water supply.[8][9]

Page data
Retrieved from "https://www.appropedia.org/w/index.php?title=Desalination&oldid=639843"
Cookies help us deliver our services. By using our services, you agree to our use of cookies.
Categories:
Maintenance categories:
Comments
Privacy policy · About Appropedia · Disclaimers · Mobile view · Content is available under CC-BY-SA-4.0 unless otherwise noted.
</html