Effect of water on light transmission of glass

One way to improve the productivity of a solar still is to pour cooling water over the glass cover. My hypothesis was that pouring water over the glass would block some of the sunlight, possibly cancelling out the increase in productivity obtained by a cooler glass surface. The literature says the water actually lets more light in because it cuts down on the losses due to absorption[1]. I had to see it with my own eyes, so I performed a simple experiment that showed the effect of water flow on the amount of irradiance coming through the glass.

The first experimental setup, shown in the picture, consisted of a small piece of glass held in place with a tupperware container. I used a solar meter, held directly against the glass, to measure irradiance. I poured water over the glass using a watering can. Table 1 shows the results. The irradiance reading consistently jumped up about 10 W/m2 when I started pouring the water. As you can see, with each new trial the initial reading was always higher than the previous initial reading. I quickly realized that the setup was flawed and the reason for this increasing reading was because as I poured more water, the tupperwear was filling up with a reflective surface that reflected light back towards the glass.

The reason for the uncertainty in the numbers is the fluctuation of the reading on the meter. The fluctuation increased when the water was flowing because the flow was not a completely smooth film. 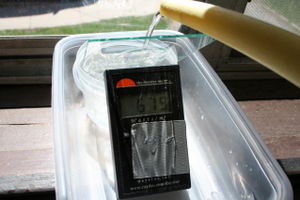 The second experimental setup was outside on the grass where the water would absorb into the ground rather than pooling up and creating a reflective surface. This experiment gave the same results as the first, except the initial reading settled down to about the same number between each trial. The increase in irradiance was about 10 W/m2, which is about a 1% increase. 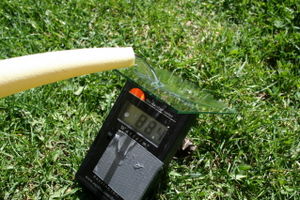 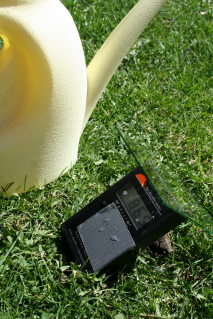 In conclusion, pouring water over a piece of glass caused the irradiance reading to increase by about 10 W/m2, which is 1% of the initial reading without water flow. It is possible that this increase is a result of the experimental setup, and therefore the results should not be extrapolated to the application of using cooling water on the glass cover of a solar still. The most probable explanation for the increase in irradiance measurement is that the water made the surface more reflective, and so the light that came through reflected off of the surface of the sensor, then onto the glass and back to the sensor. If this is the case, the results would be applicable to solar stills because an increased amount of light that is reflected back towards the water basin would improve the rate of evaporation.

Back to Improving Basin Solar Stills