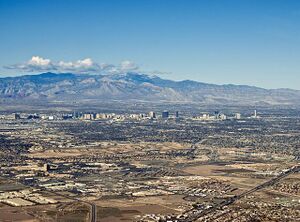 Nevada ( ni-VA-də or ni-VAH-də; Spanish: [neˈβaða]) is a state in the Western region of the United States. It is bordered by Oregon to the northwest, Idaho to the northeast, California to the west, Arizona to the southeast, and Utah to the east. Nevada is the 7th-most extensive, the 32nd-most populous, and the 9th-least densely populated of the U.S. states. Nearly three-quarters of Nevada's people live in Clark County, which contains the Las Vegas–Paradise metropolitan area, including three of the state's four largest incorporated cities. Nevada's capital is Carson City while the largest city is Las Vegas.

The Sierra Water and Climate Change Campaign works for regional protection and restoration of ecosystems and economies by participating in local and statewide planning that adapts to climate change. W

Due to concerns about climate change in the wake of a 2002 drought, daily water consumption in Las Vegas has been reduced from 314 gallons per resident in 2003 to around 205 gallons. Despite these conservation efforts, local water consumption remains 30 percent more than in Los Angeles, and over three times that of San Francisco metropolitan area residents. The Southern Nevada Water Authority is building a $1.4 billion tunnel and pumping station to bring water from Lake Mead, which "would allow the city to continue taking water even after the generators and pumps in the Hoover Dam stop operating and California, Arizona and Mexico, which is also entitled to the tail end of the Colorado’s water, are completely cut off."

From Wikipedia:Climate change in Nevada § Ecosystems

The region's inherently variable and unpredictable hydrological and climatic systems could become even more variable with changes in climate, putting stress on wetland ecosystems. The streams and rivers in Nevada are entirely spring-fed or derived from runoff from the mountains. A warmer climate would increase evaporation and shorten the snow season in the mountains, resulting in earlier spring runoff and reduced summer streamflow. This would exacerbate fire risk in the late summer. These threats, coupled with increasing human demands on water resources, could severely reduce the number and quality of wetland habitats, which are already stressed and ephemeral. This would degrade habitat essential for migrating and breeding birds, and could further stress rare and endangered fish species. Many desert-adapted plants and animals already live near their tolerance limits, and could disappear under the hotter conditions predicted under global warming.

The Sierra Nevada Alliance is a network of conservation groups encompassing 24 watersheds of the 650 kilometer-long Sierra Nevada in California and Nevada. Beginning in 1993, the Alliance protects and restores Sierra Nevada lands, watersheds, wildlife and communities.

The network's mission is to protect and restore Sierra Nevada natural resources for future generations while promoting sustainable communities. The Alliance follows five guidelines: 1) Sustainable natural ecosystems, 2) Strong local economies, 3) Broad-based public involvement and support, 4) Rational water use and 5) A solution to a problem cannot be to transfer the problem some place else. The Alliance plays a unique role in facilitating grassroots conservation groups' and watershed groups' involvement with government agencies, public utilities and local organizations.

There are 68 designated wilderness areas in Nevada, protecting some 6,579,014 acres (2,662,433 ha) under the jurisdiction of the National Park Service, U.S. Forest Service, and Bureau of Land Management.

From Wikipedia:Climate change in Nevada § Forests

With changes in climate, the extent of forested areas in Nevada could change little or decline by as much as 15-30%. The uncertainties depend on many factors, including whether soils becomedrier and, if so, how much drier. Hotter, drier weather could increase the frequency and intensity of wildfires, threatening both property and forests. Drier conditions would reduce therange and health of ponderosa and lodgepole pine forests in the northern and western areas of the state, and increase their susceptibility to fire. Grasslands, rangeland, and desert could expand into previously forested areas. Milder winters could increase the likelihood of insect outbreaks and of subsequent wildfires in the dead fuel left after such an outbreak. Thesechanges would significantly affect the character of Nevada forests and the activities that depend on them. Increased rainfall could reduce the severity of these effects.

From Wikipedia:Solar power in Nevada

Solar power in Nevada is growing due to a Renewable Portfolio Standard which requires 20% renewable energy by 2015, and 5% from solar power. The state has abundant open land areas and some of the best solar potential in the country.

Eagle Shadow Mountain Solar Farm is a planned 420 MWp (300 MWAC) photovoltaic power station north of Las Vegas, Clark County, Nevada on the Moapa River Indian Reservation.The facility is being developed by 8minutenergy Renewables and when completed will be the largest photovoltaic system on tribal lands in North America. It is also the largest component within NV Energy's current tranche of renewable energy projects that will create over 1 Gigawatt of new electricity supply.

The electricity generated will have a flat rate of $23.76 per megawatt-hour throughout its 25-year power purchase agreement (PPA) term, which could establish a new record-low rate for a solar PPA contract.

The project is also part of NV Energy’s plans to retire a 254 MW coal-fired unit in a power-constrained region of Nevada at the end of 2021, four years ahead of schedule.

From Wikipedia:Wind power in Nevada

The U.S. state of Nevada has a quite limited potential capacity for onshore wind power generation, ranking 29th among the states. The NREL estimates that the potential for 7.2 GW of wind generation capacity exists in Nevada, which could generate 17,709 GW·h per year (roughly 60% of the state's electric demand).

As of 2016 Nevada has just 152 MW installed in one farm, the Spring Valley Wind project, which commenced operation in 2012. Wind power was responsible for 0.9% of in-state electricity produced in 2016.