From Appropedia
Redirected from West Midlands 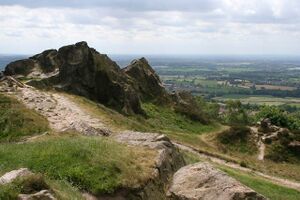 The West Midlands is one of nine official regions of England at the first level of International Territorial Level for statistical purposes. It covers the western half of the area traditionally known as the Midlands. The region consists of the counties of Herefordshire, Shropshire, Staffordshire, Warwickshire, West Midlands and Worcestershire. The region has seven cities; Birmingham, Coventry, Hereford, Lichfield, Stoke-on-Trent, Wolverhampton and Worcester.

The West Midlands region is geographically diverse, from the urban central areas of the West Midlands conurbation to the rural counties of Herefordshire, Shropshire and Worcestershire which border Wales. The region is landlocked. However, the longest river in the UK, the River Severn, traverses the region southeastwards, flowing through the county towns of Shrewsbury and Worcester, and the Ironbridge Gorge, a UNESCO World Heritage Site. Staffordshire is home to the industrialised Potteries conurbation, including the city of Stoke-on-Trent, and the Staffordshire Moorlands area, which borders the southeastern Peak District National Park near Leek. The region also encompasses five Areas of Outstanding Natural Beauty, the Wye Valley, Shropshire Hills, Cannock Chase, Malvern Hills, and parts of the Cotswolds. Warwickshire is home to the towns of Stratford upon Avon, birthplace of writer William Shakespeare, Rugby, the birthplace of Rugby football and Nuneaton, birthplace to author George Eliot.

The region contains five Areas of Outstanding Natural Beauty (AONBs), including all of the Shropshire Hills, Malvern Hills and Cannock Chase, and parts of the Wye Valley and Cotswolds. The Peak District national park also stretches into the northern corner of Staffordshire. W

The National Forest is an environmental project in central England run by The National Forest Company. From the 1990s, 200 square miles (520 km2) of north Leicestershire, south Derbyshire and southeast Staffordshire have been planted in an attempt to blend ancient woodland with newly planted areas to create a new national forest. It stretches from the western outskirts of Leicester in the east to Burton upon Trent in the west, and is planned to link the ancient forests of Needwood and Charnwood.

The Forest of Mercia lies within the northernmost boundary of the more ancient and well-known Forest of Arden which covered the area when it formed part of the Kingdom of Mercia, and is one of twelve community forests established close to major towns and cities across England. It covers an area of 92 square miles (23,000 hectares), and is focused around the town of Cannock in South Staffordshire.

Wyre Forest is a large, semi-natural (partially unmanaged) woodland and forest measuring 26.34 square kilometres (10.17 sq mi) which straddles the borders of Worcestershire and Shropshire, England. Knowles Mill, a former corn mill owned by the National Trust, lies within the forest.

Fairtrade in Solihull, information from solihull.gov.uk

Fordhall Farm is an organic farm of 128 acres, in Market Drayton in north Shropshire, England. It is owned by an industrial and provident society, the Fordhall Community Land Initiative (FCLI), whose aim is to use the farm for community benefit. The farm became a cause célèbre in 2005, when a campaign to raise funds for FCLI to purchase the land gained national press attention.

The region, from studies of multiple deprivation, shows similarities with Yorkshire and the Humber, and is more deprived than the neighbouring East Midlands. From the Indices of deprivation 2007, it can be seen that, in common with Northern England, the region has more Lower Area Super Output Areas in the 20% most deprived districts than in the 20% least deprived districts. The region's most deprived council districts, in descending order, are Birmingham (10th highest in England), Sandwell (14th), Stoke-on-Trent (16th), Wolverhampton (28th), Walsall (45th), Coventry (61st), and Dudley (100th).

The West Midlands Metro (originally named Midland Metro) is a light-rail/tram system in the county of West Midlands, England. Opened on 30 May 1999, it currently consists of a single route, Line 1, which operates between the cities of Birmingham and Wolverhampton via the towns of Bilston, West Bromwich and Wednesbury, running on a mixture of reopened disused railway line (the Birmingham Snow Hill to Wolverhampton Low Level Line) and on-street running in urban areas. The line originally terminated at Birmingham Snow Hill station but, with extensions opened in 2015, 2019 and 2022, now runs via Birmingham city centre to terminate at Edgbaston. A further extension in Wolverhampton was scheduled to open in 2022, but as been pushed back to 2023.

An extension to Wolverhampton railway station is scheduled to open in spring 2023. Construction of a new Line 2 & 3 from Wednesbury to Brierley Hill was approved in March 2019, started in February 2020 and was intended to be completed for the 2022 Commonwealth Games. However, delays in construction of the extension due to COVID-19 have delayed the project. A further extension will create a new Line 4 from Edgbaston to Curzon Street, Digbeth, Solihull or Chelmsley Wood and Birmingham Airport planned to open in phases in 2023 and 2024–2026 depending on when planning permission is accepted.

Free beer (and ice cream) for cycling in Bologna, local retail services for volunteering in Newcastle-Under-Lyme. Communities can incentivise themselves, Dec 14[3]

Did you know that over a quarter of all households in Herefordshire are living in Fuel Poverty? September 11[5]

Go ahead for solar panels at Leamington Spa Hospital, May 21[6]

Page data
Retrieved from "https://www.appropedia.org/w/index.php?title=West_Midlands_community_action&oldid=666077"
Cookies help us deliver our services. By using our services, you agree to our use of cookies.
Categories:
About Appropedia · Policies · Contact · Content is available under CC-BY-SA-4.0 unless otherwise noted.