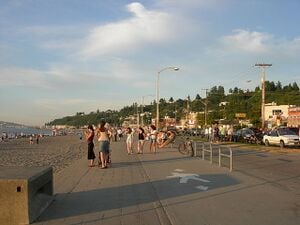 This article is about the U.S. state of Washington. For the capital of the United States, see Washington DC

Washington ( (listen)), officially the State of Washington, is a state in the Pacific Northwest region of the Western United States. Named for George Washington—the first U.S. president—the state was formed from the western part of the Washington Territory, which was ceded by the British Empire in 1846, by the Oregon Treaty in the settlement of the Oregon boundary dispute. The state is bordered on the west by the Pacific Ocean, Oregon to the south, Idaho to the east, and the Canadian province of British Columbia to the north. It was admitted to the Union as the 42nd state in 1889. Olympia is the state capital; the state's largest city is Seattle. Washington is often referred to as Washington state to distinguish it from the nation's capital, Washington, D.C.

Washington is the 18th-largest state, with an area of 71,362 square miles (184,830 km2), and the 13th-most populous state, with more than 7.7 million people. The majority of Washington's residents live in the Seattle metropolitan area, the center of transportation, business, and industry on Puget Sound, an inlet of the Pacific Ocean consisting of numerous islands, deep fjords, and bays carved out by glaciers. The remainder of the state consists of deep temperate rainforests in the west; mountain ranges in the west, central, northeast, and far southeast; and a semi-arid basin region in the east, central, and south, given over to intensive agriculture. Washington is the second most populous state on the West Coast and in the Western United States, after California. Mount Rainier, an active stratovolcano, is the state's highest elevation at 14,411 feet (4,392 meters), and is the most topographically prominent mountain in the contiguous U.S.

From Wikipedia:Restoration of the Elwha River

The Elwha Ecosystem Restoration Project is a 21st-century project of the U.S. National Park Service to remove two dams on the Elwha River on the Olympic Peninsula in Washington state, and restore the river to a natural state. It is the largest dam removal project in history and the second largest ecosystem restoration project in the history of the National Park Service, after the Restoration of the Everglades. The controversial project, costing about $351.4 million, has been contested and periodically blocked for decades. It has been supported by a major collaboration among the Lower Elwha Klallam Tribe, and federal and state agencies.

The Whatcom Peace & Justice Center was founded in 2002 by local activists, and has been one of the most active such centers in the nation.

In October 2006, the Bellingham City Council passed a Troops Home! resolution, making Bellingham the first city in the state of Washington to pass the resolution. Two years later, the City Council passed a resolution urging elected representatives and the federal government to avoid war with Iran, becoming the first city in the state to do so. In 2012, the City Council unanimously passed a resolution calling upon the federal government to overturn the Supreme Court's decision in the case of FEC v. Citizens United by declaring that U.S. Constitutional rights apply to natural persons and not to corporations. In 2014, coinciding with Columbus Day that celebrates the arrival of European explorers, the City Council officially established Coast Salish Day to celebrate the Native American peoples who continue to call the geographic region their home.

In 2015, the Seattle Arctic drilling protests spread to Bellingham when a protester chained herself to the anchor chain of a Royal Dutch Shell ship for 63 hours.

The Washington state government has adapted the federal government's Marine Protected Area (MPA) system into designated Aquatic Reserves, defined as "aquatic lands of special educational or scientific interest or lands of special environmental importance that are threatened by degradation". Aquatic Reserves are meant to serve as aquatic versions of national parks or sanctuaries. Through the Aquatic Reserve Program, the DNR hopes to control these areas in an effort to restore, preserve or enhance habitats and species that directly tie into the aquatic ecosystem. The first Aquatic Reserve created under the program was at Maury Island in November 2004. Further candidate sites under review include Cherry Point, Fidalgo Bay and Cypress Island.

From Wikipedia:Wind power in Washington (state)

The Cascade Bicycle Club is a nonprofit 501(c)(3) community organization based in Seattle. It is the largest statewide bicycling nonprofit in the United States with more than 17,000 members. It is run by a volunteer board of directors, 36 professional staff and more than 1,000 volunteers.

In addition to producing material for the public on bicycling the Cascade Bicycle Club lobbies local government on behalf of people who ride bikes. Advocacy staff produced a paper titled "Left by the Side of the Road" asserting the shortfall of safe, effective bicycle routes in the region.

From 2009-2011 the club successfully lobbied for a law to increase penalties for negligent drivers who injured or killed vulnerable users of the road, including bicyclists and pedestrians.

The Cascade Bicycle lobbies have petitioned for extending and building trails along the Burke-Gilman Trail through the industrial waterfront of Ballard. After local businesses obstructed progress of the project, the club joined the City of Seattle in a lawsuit to move trail construction forward. W

The Seattle to Portland, or STP, is an annual one- or two-day supported bicycle ride from Seattle, Washington, to Portland, Oregon. The STP "is considered one of the 10 biggest recreational bicycle rides in the country, drawing riders from across the nation and from other nations", and has been operating since 1979. The ride is organized by the Cascade Bicycle Club. It is approximately 206 miles (332 km) in length. Most riders complete the distance in two days; however, 1854 of the nearly 8000 riders attempted to ride in one day (2018). W

Empower Up, a 501(c), is a computer recycling center in SW Washington. Started in mid-2002, Empower Up takes old electronics in for donation, and recycles/distributes them. W

Washington judge rules in favor of kids and climate, Apr 29 [1]

The Wettest Rainforest in the United States Has Gone Up in Flames, July 30 [2]