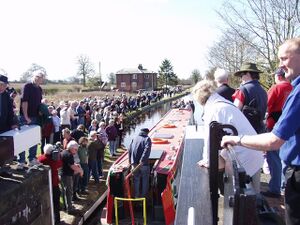 Opening another restored section of canal. The restoration of the Montgomery Canal is a complex long term project because of the sensitive nature of the derelict canal. The photo shows the "official" boat passing through the Aston top lock after the opening ceremony in April 2003. Attribution: John Haynes
Location data
Page data
From Wikipedia:Shropshire

Shropshire (; alternatively Salop; abbreviated in print only as Shrops; demonym Salopian sə-LOH-pee-ən) is a landlocked historic county in the West Midlands region of England. It is bordered by Wales to the west and the English counties of Cheshire to the north, Staffordshire to the east, Worcestershire to the southeast, and Herefordshire to the south. A unitary authority of the same name was created in 2009, taking over from the previous county council and five district councils, now governed by Shropshire Council. The borough of Telford and Wrekin has been a separate unitary authority since 1998, but remains part of the ceremonial county.

The county's population and economy is centred on five towns: the county town of Shrewsbury, which is culturally and historically important and close to the centre of the county; Telford, which was founded as a new town in the east which was constructed around a number of older towns, most notably Wellington, Dawley and Madeley, which is today the most populous; Oswestry in the northwest, Bridgnorth to the south of Telford, and Ludlow in the south. The county has eighteen market towns, including Whitchurch in the north, Newport near Telford, and Market Drayton in the northeast.

Shropshire is one of England's most rural and sparsely populated counties, with a population density of 136/km2 (350/sq mi).

Ludlow Mill On The Green

The Shropshire Hills area, in the English county of Shropshire, is designated as an Area of Outstanding Natural Beauty (AONB). It is located in the south of the county, extending to its border with Wales. Designated in 1958, the area encompasses 802 square kilometres (310 sq mi) of land primarily in south-west Shropshire, taking its name from the upland region of the Shropshire Hills. The A49 road and Welsh Marches Railway Line bisect the area north-south, passing through or near Shrewsbury, Church Stretton, Craven Arms and Ludlow.

Three British Waterways canals run through Shropshire: the Shropshire Union Canal (from north of Adderley to near Knighton), the Llangollen Canal (from Chirk Aqueduct to Grindley Brook) and the Montgomery Canal (from its beginning at Frankton Junction to Llanymynech). In addition, the Shrewsbury and Newport Canal potentially could be restored in the future. [1]